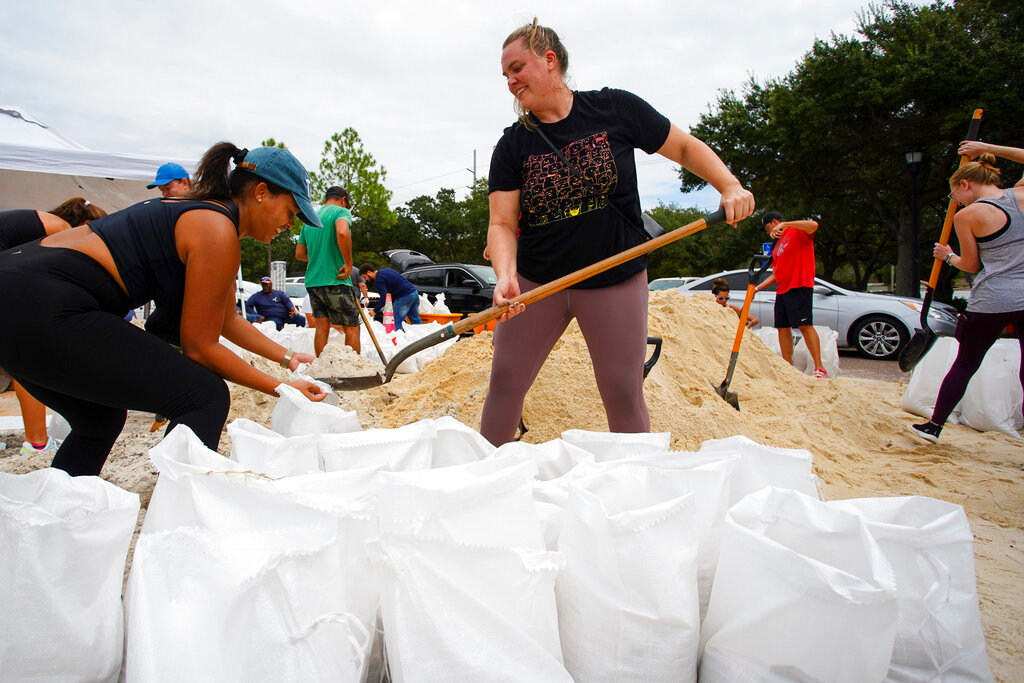 Felicia Livengood and Victoria Colson fill sandbags along with hundreds of other Tampa residents that waited for more than two hours at Himes Avenue Complex to fill their ten free sandbags on Sunday, Sept. 25, 2022, in Tampa, Fla. (Luis Santana/Tampa Bay Times via AP) 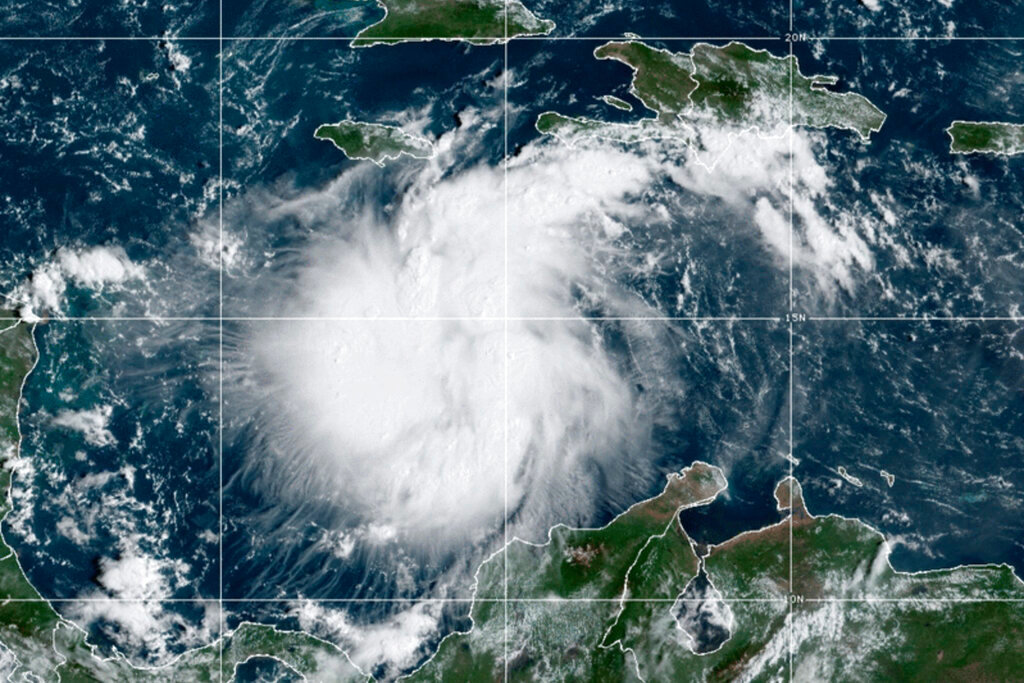 This satellite image provided by the National Oceanic and Atmospheric Administration shows Tropical Storm Ian over the central Caribbean on Saturday, Sept. 24, 2022. (NOAA via AP) 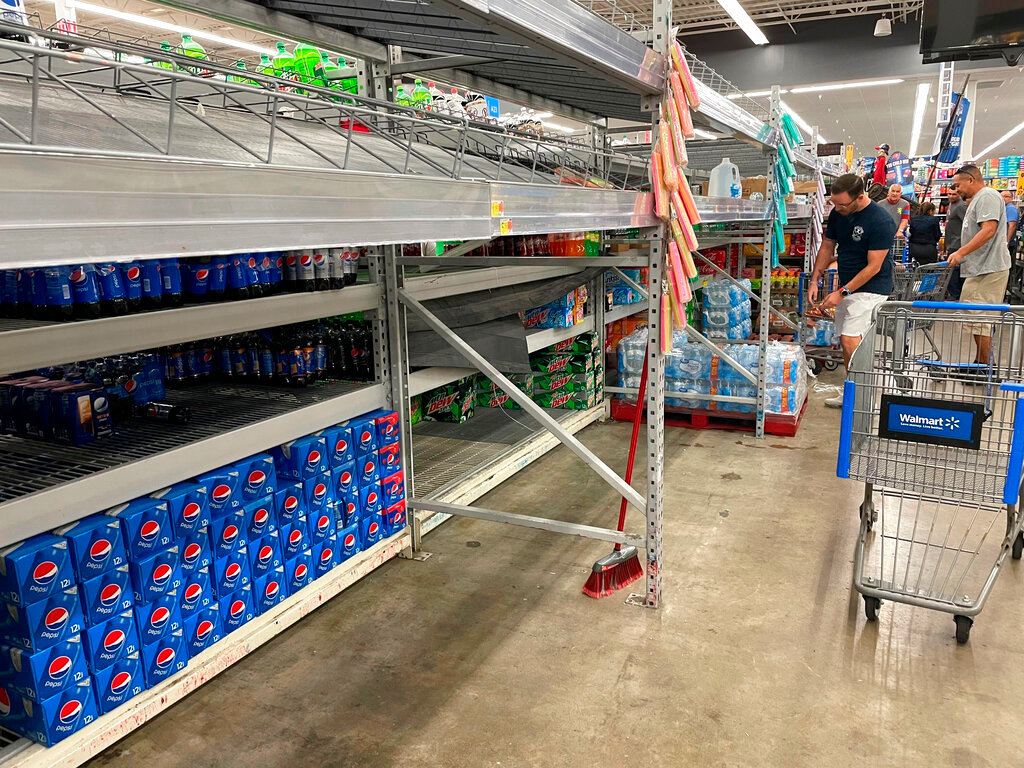 Shoppers go for what is left of the water on the shelves of a Walmart Supercenter, Sunday, Sept. 25, 2022, in Tampa, Fla., as Tropical Storm Ian threatened to impact the Tampa Bay area as a major hurricane later in the week. (Matt Cohen/Tampa Bay Times via AP)
Previous Next
Posted Sunday, September 25, 2022 9:25 pm
By ANTHONY IZAGUIRRE, Associated Press

TALLAHASSEE, Fla. (AP) — Authorities and residents in Florida were keeping a cautious eye on Tropical Storm Ian as it rumbled ominously through the Caribbean on Sunday, likely to become a major hurricane on its path toward the state.

Gov. Ron DeSantis has declared a state of emergency throughout Florida and urged residents to prepare for the storm to lash large swaths of the state with heavy rains, high winds, and rising seas.

Forecasters are still unsure of exactly where Ian could make landfall, with current models plotting it toward Florida's west coast or panhandle regions, he said.

“We're going to keep monitoring the track of this storm. But it really is important to stress the degree of uncertainty that still exists,” DeSantis said at a news conference Sunday, cautioning that “even if you're not necessarily right in the eye of the path of the storm, there's going to be pretty broad impacts throughout the state.”

The National Hurricane Center said Ian is expected to become a hurricane on Monday and reach major hurricane strength Tuesday. Flash and urban flooding are possible in the Florida Keys and Florida peninsula through midweek, and then heavy rainfall was possible for north Florida, the Florida panhandle, and the southeast United States later this week.

The agency placed a tropical storm watch over the lower Florida Keys on Sunday evening and has advised Floridians to have hurricane plans in place and monitor updates of the storm’s evolving path.

A hurricane warning was in effect Sunday for Grand Cayman and the Cuban provinces of Isla de Juventud, Pinar del Rio, and Artemisa.

Cuban state media said emergency authorities have met to plan for the storm’s arrival and prepare for evacuations, though none had been ordered as of Sunday. The track forecast by the National Hurricane Center shows a major storm striking the far-western part of the island early Tuesday, close to the country’s most famed tobacco fields.

John Cangialosi, a senior hurricane specialist at the Miami-based center, said in an interview Sunday that it is not clear exactly where Ian will hit hardest in Florida. Residents should begin preparations, including gathering supplies for potential power outages, he said.

“It's a hard thing to say stay tuned, but that's the right message right now,” Cangialosi said “But for those in Florida, it's still time to prepare. I'm not telling you to put up your shutters yet or do anything like that, but it's still time to get your supplies.”

Local media in Florida have reported a consumer rush on water, generators, and other supplies in some areas where residents moved to stock up on goods ahead of the storm.

Kevin Guthrie, director of the Florida Division of Emergency Management, said the state has begun loading trailers with more than 2 million meals and more than 1 million gallons of water to be ready to be sent into impacted areas. He said the state has had frequent communication with local governments and is processing requests for resources.

Georgia Gov. Brian Kemp on Sunday moved to activate the State Operations Center to respond to any potential storm damage. He told residents to monitor the weather and calmly take precautions if necessary.

At the Kennedy Space Center, NASA kept a close watch on Ian’s projected path while debating whether to move its new moon rocket off the launch pad and into shelter. Managers already have bumped the test flight from this week to next because of the storm.

Elsewhere, powerful post-tropical cyclone Fiona crashed ashore Saturday in Nova Scotia in the Atlantic Canada region, washing houses into the sea, tearing off rooftops, and knocking out power to more than 500,000 customers in two provinces.