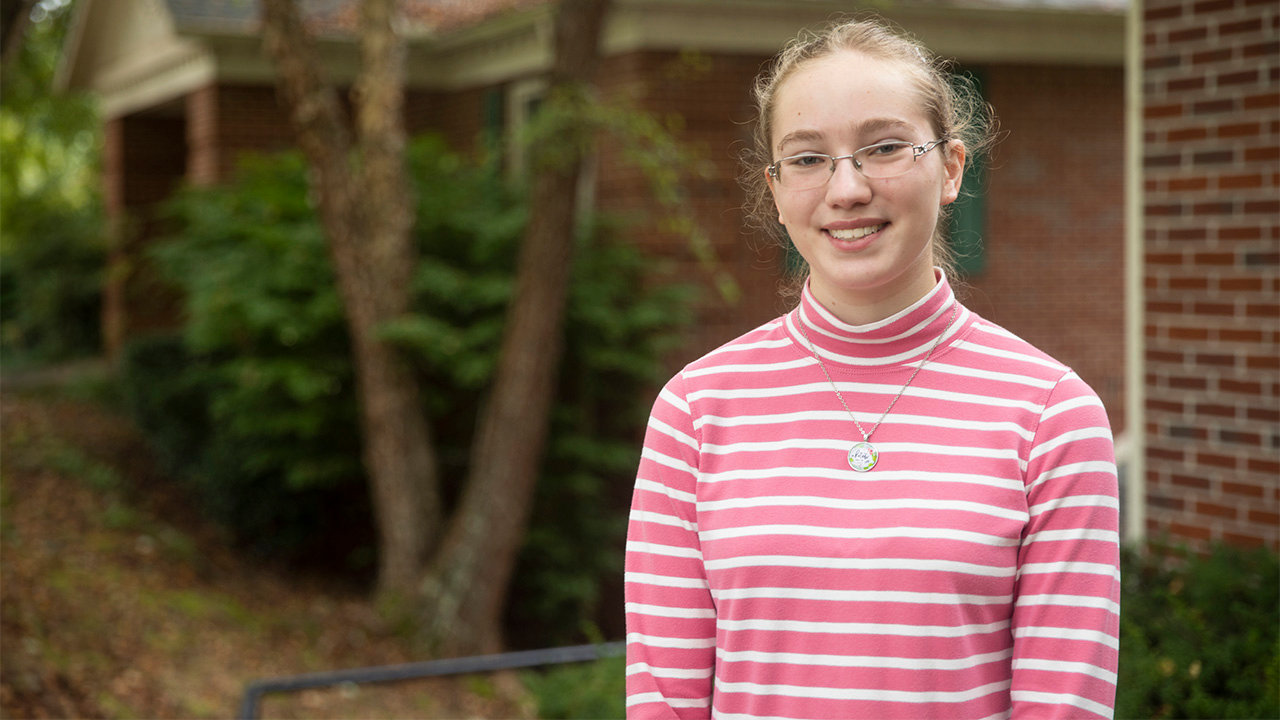 “At first, I had no idea where I wanted to go to college,” said Lomax. “My entire homeschool education was based on Christianity, and I wanted a college that would help me continue that education.”

Lomax attended a Preview Day at TMU, where she quickly realized that TMU was where she would attend. “The atmosphere was inviting,” she said, “and everyone was so helpful and friendly.” She soon attended dual enrollment classes before enrolling as a full-time student.

It all begins with an imagination

Although her interest in writing started in middle school, the aspiring author remembers having a vivid imagination as a child. “Looking back,” she said, “I remember creating stories through drawings and toys.” It was later that she would begin putting those stories to pen.

“In high school, I started writing seriously,” said Lomax. “I wanted to express my imagination and improve my writing skills, but most importantly, I desired to use this gift to spread God’s Word to people all over the world through stories.”

Although her main focus at TMU is writing, Lomax also minors in music­­, a talent she began pursing at the age of six. “Music is something I have been involved in most of my life,” she said. “Even at a young age I realized God had given me a talent for it, and I wanted to continue to use it to glorify Him.”

The multi-talented sophomore says she has been able to take her four passions: writing, art, music, and animals, and really understand the biblical principles of each at the collegiate level.

One of her most intriguing classes at TMU was biology. “I thoroughly enjoyed studying animals and the rest of creation from a Christian perspective. It gave me a new understanding and appreciation of everything God has created and how humans interact with creation.”

Currently, Lomax is gaining valuable insight through her creative writing class. “I absolutely love it!” said Lomax. “It is so much fun to write your own stories and read the ones from your fellow classmates. In this process, we also critique each other’s work to help improve our writing styles. I know this course will impact the rest of my writing career.”

Lomax has also been published in both the first and second editions of the university’s literary journal, Yonah Literary Review, for winning in the areas of creative writing and artwork, another one of her many talents.

“I would probably say that I have been drawing ever since I could hold a crayon,” she says. “Whether it is a realistic picture or simply a cartoon, I have always loved to draw.”

One of Lomax’s greatest endeavors is publishing a novel. Just recently, Lomax completed her first novel, "Broken Mirrors," a Christian fiction which is part of a trilogy.

“I believe this story started as a simple idea in high school,” she said. “The story has to do with redemption. I have always enjoyed delving into the emotions and inner conflicts of different characters—especially the outcasts. In this story, I wanted to portray an outcast overcoming his difficulties and fears in order to pursue his dreams and be the man he once was.”

Lomax hopes her will not only bring pleasure to her readers, but also speak to others facing similar situations or difficulties. “If they will simply see themselves the way God does, they will be able to look past what society thinks and be their best for God,” she said.

Currently, Lomax is in the publishing process with Deeds Publishing out of Athens, Georgia. Her book will also include some of her own illustrations with hopes to be finished by the end of October.

Lomax is looking forward to how God will mold her talents even more as she pursues her degree at TMU.

“I have learned invaluable tips in writing and in the music program,” said Lomax. “Truett McConnell has definitely helped me improve each of these talents God has given me for His glory.”

Jenny Gregory is the Digital Marketing Specialist for TMU’s Marketing and Communications.