Truett-McConnell, other Baptist institutions stand and wait on mandate solution

Truett McConnell College in north Georgia is once again expanding its master's program to include a degree in professional counseling. TMU/Special
Posted Friday, August 12, 2016 12:00 am
The Christian Index

Truett McConnell University is among a group of Baptist entities standing against a contraception mandate from the federal government that could force them to provide abortifacients. TMU/Special

WASHINGTON (BP) — Southern Baptist-affiliated institutions are maintaining their stand against the Obama administration's abortion/contraception mandate while they continue to wait for a satisfactory legal resolution.

GuideStone Financial Resources and four Baptist universities – East Texas Baptist, Houston Baptist, Oklahoma Baptist, and Truett McConnell – are among 92 nonprofit religious organizations awaiting what they hope will be an agreement with the federal government that protects their freedom of conscience.

As they have for years, the Southern Baptist-affiliated institutions object to a rule implementing the 2010 health-care law that requires employers to provide their workers with coverage for contraceptives with mechanisms that can potentially induce abortions. They filed suit in opposition to what they consider to be the administration's unsatisfactory accommodation of that objection.

Discussions, but no developments

The U.S. Supreme Court gave hope to the religious objectors in mid-May when it nullified multiple, unfavorable federal appeals court decisions and blocked the administration from imposing fines on the institutions. The justices told the appeals courts involved to give the parties an opportunity to reach a solution "that accommodates petitioners' religious exercise while at the same time ensuring that women covered by petitioners' health plans receive full and equal health coverage, including contraceptive coverage."

Initial discussions have occurred between the administration and the religious objectors, but there are no developments to report, according to the Alliance Defending Freedom (ADF), which represents Oklahoma Baptist University and other institutions.

"[I]t's too soon to tell" whether to be hopeful about the negotiations, ADF Senior Counsel Gregory Baylor told Baptist Press.

The religious institutions cited in briefs filed with the high court before its May order some various ways the objectionable drugs and devices could be provided without violating their consciences. But, the central question is whether the administration will back away from its position before the justices "that the current way was the only way that was acceptable" to it, Baylor said.

The Becket Fund for Religious Liberty – which represents the other Southern Baptist-affiliated institutions – was encouraged by the Supreme Court's actions in response to a mandate that from the start intruded on the religious organizations' desire to fulfill their mission "in accordance with their faith," said Eric Rassbach, deputy general counsel.

'Trying not to sin'

The rule issued by the Department of Health and Human Services "put them into this impossible situation where basically as a condition of helping the poor or providing people with a Christian education like East Texas Baptist University or Houston Baptist University or providing health-care services like GuideStone, ... they were going to have do something that they thought was sinful," Rassbach told BP. "So ultimately they're trying not to sin."

Southern Baptist ethicist Russell Moore said the federal government is making an "audacious claim" with its mandate – "that these ministries misunderstand their own faith and that they can deliver these drugs without disobeying God."

"But part of the reason why Southern Baptists have always stood for religious liberty is precisely because it is not the government's job to give us a lesson in theology," said Moore, president of the Ethics & Religious Liberty Commission (ERLC). 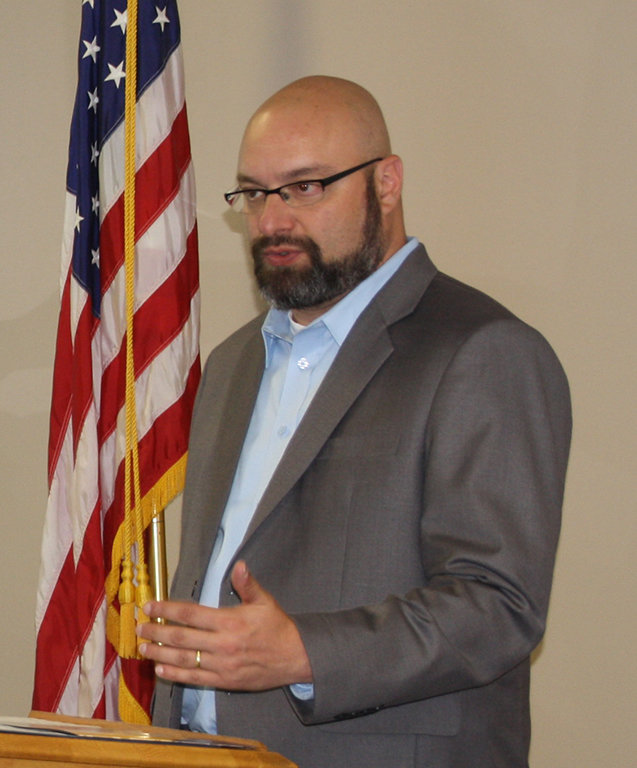 Truett-McConnell University President Emir Caner, pictured in this file photo from last fall, said regarding the conception mandate, "We continue to pray for boldness and, if God wills, deliverance. If the next generation is to enjoy religious liberty, this generation must stand for these liberties against the popular view of America's declining culture." SCOTT BARKLEY/Index

"We continue to pray for boldness and, if God wills, deliverance. If the next generation is to enjoy religious liberty, this generation must stand for these liberties against the popular view of America's declining culture."

Caner: mandate 'goes against our values'

Emir Caner, president of Truett McConnell, told BP by email the mandate "goes against our values based in the sufficiency of Scripture. As such, we will continue to stand on our principles, fight for life and liberty, and rely on our Lord for the consequences."

HHS provided an exemption to the mandate for churches and their auxiliaries but did not extend it to non-church-related, nonprofit organizations that object – such as the Baptist colleges. The latest of nearly 10 accommodations proposed by HHS requires the nonprofits to provide written notification they meet the requirements for an accommodation, which forces the nonprofit's insurer or a third-party administrator to provide contraceptive coverage.

For the Baptist objectors, the accommodation remains unsatisfactory.

"Under the so-called accommodation, the government was empowered to take control of our medical plan, to have access to the names and addresses of those enrolled in our plan, and to direct the administrator of our medical plan to provide all 20 contraceptive drugs and devices to those in our plan," Loftin told BP in email comments.

The federal government has "innumerable ways" to provide potentially abortion-inducing drugs and devices "without commandeering our medical plan and forcing us to provide services that violate our religious convictions," he said.

All representatives of the Baptist entities told BP they were encouraged by the Supreme Court's May order, and they all acknowledged there are reasons for Southern Baptists to pray as the parties seek resolution.

Caner said, "We continue to pray for boldness and, if God wills, deliverance. If the next generation is to enjoy religious liberty, this generation must stand for these liberties against the popular view of America's declining culture."

GuideStone is exempt from the HHS rule, but it serves ministries that are required to obey the mandate, including Truett McConnell.