Braswell Baptist Church in the community of Good Hope models many congregations situated in rural areas, where lack of resources such as musicians can come into play. GOOGLE MAPS/Special

Kenneth Epperson prefers a piano playing during worship on Sundays. These days, though, he's broadening his range.

"I'd accept any instrument, really," says Epperson, pastor of Braswell Baptist Church in the Good Hope community east of Monroe. "Guitar, tambourine ... bongo drums, if someone has them."

Epperson's predicament isn't unusual, especially for rural ministers. Finding someone to lead worship on Sunday mornings isn't that difficult. But locating a musician to fill the air with joyful noise? Well …

"We're a small, country church," explains Epperson. "We have mostly older folks and run around 20 on Sundays. There are younger people coming, but usually on Wednesday."

Braswell Baptist epitomizes "rural." Right on the Morgan County line, it is, as Epperson says, "as far away from the county seat as you can get." Good Hope has a country store and gas station with a Hunt Brothers Pizza, but that's about it. A cattle farm across the road from the church can irritate one's olfactory senses if the wind blows in an unfortunate direction on a hot day.

Over his 34 years of ministry Epperson has served churches as an evangelist and layman. He arrived at Braswell, his first pastorate, close to four years ago. Today, Sunday music comes from a set of CDs pumping out piano accompaniments to hymns.

And though the piano is clear and always on key, a missing human element remains clear.

"It just doesn't quite match how we're used to singing, and there's a pause between verses," he says. "You're missing a lot from the live person playing along."

The spirit is willing, but the wallet is weak

The issue has picked up recently, points out J. Allen Hill, missionary for Appalachee Baptist Association.

"We have a lot of small churches and been getting calls from pastors saying they need help with worship. Many of them serve bivocationally and don't have anyone to lead music or play piano. A few of the churches are larger, but recently experienced a time of change and transition," Hill adds.

It's not difficult to pinpoint the crux of the matter. Ministers – whether pastors, those working with music or youth, etc. – want to serve, but need to be able to provide for their families. On the other side of the discussion, churches see dwindling resources to compensate ministers.

And even if those churches can support a part-time salary, local job opportunities for the ministers may lack. This is especially true for rural areas, where most Georgia Baptist churches reside.

"Many churches need revitalization," says Hill. "Music is such an important part where new life can be brought into a church." 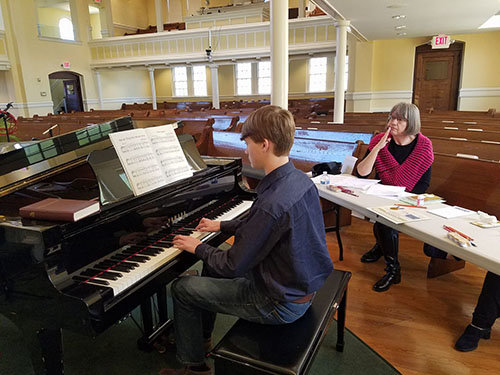 A young pianist takes part earlier this month in the Keyboard Festival held at First Baptist Church in Monroe under the watchful eye of judge Susan Rhiner. On the same day, another Keyboard Festival took place at Rose Hill Baptist Church in Columbus. Such events are crucial for developing the next generation of worship leaders, say ministers. EDDY OLIVER/GBMB Worship and Music Ministries

Not just a small church problem

"There's a shortage of accompanists throughout the state," intones Oliver. "We're continuously getting calls in the office requesting leaders for supply or interim work. At the same time, we have a list of those who are available but don't want a permanent position. They may be retired or just want to help out."

When it comes to a dearth of young leaders in church music, Oliver points to a greater cultural change in play.

"It used to be a rite of passage for kids to take piano lessons. But now, with so much competition from sports and other activities, it's affected the number available."

Missions and music, in harmony

Building up the next generation of music leaders comes through the efforts of those like Oliver, though. For the past 15 years, he's worked with Georgia Baptist music camps, geared to help young musicians grow in their skills, as well as their witness.

"Our Surge 150 music camp each summer works with children and youth up through college freshmen and offers a variety of instruments to learn, including piano and guitar," he says. "We hope to spark an interest in playing for their church and getting more comfortable in leading."

Every three years, Worship and Music Ministries also sponsors an All-State Choir and Orchestra made up of young Georgia Baptists. As part of the experience, members grow together on a mission trip. This year's will be to Pittsburg, a SEND City through the North American Mission Board.

"While there we'll be working with NAMB missionaries," explains Oliver. "It's also on the edge of Appalachia, so we're going to help some of the church planters in the area with concerts and other mission work."

Some options such as reaching out to local college ministries are also on the table. Students from UGA's Baptist Collegiate Ministries have filled in for some Appalachee Association churches, Hill points out.

"Those churches were willing to give a small stipend – or what some would call an honorarium – for someone to help with music for a period of time. That happened whether they were an accompanist, singer, or played an instrument.

"Most churches would be happy to do that so it wouldn't just be on a voluntary basis. Those students would get some experience and it would help get younger people involved."

"They have done a great job mentoring young talent in their church and encouraging them to use their gifts in service to the Lord," says Hill. 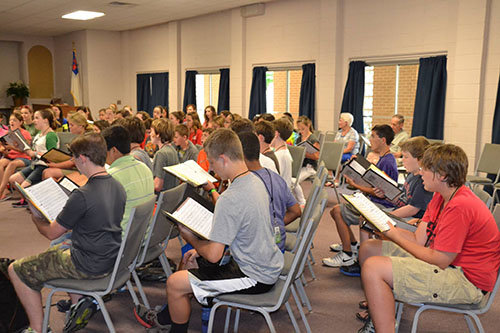 For pastors like Kenneth Epperson, that young talent is greatly needed. Music from a CD is okay, but can feel regimented and stale. As a change of pace sometimes the congregation sings a capella.

Last summer a 12-year-old girl visiting the church played piano during worship, but she eventually stopped coming "when her home life changed," explains Epperson. Another young man – talented, by the pastor's description – is a member but can't commit to being there every Sunday due to helping on the family farm and his late-night Saturday gigs with his band.

"The ones who are gifted, the world pulls hard to put their talents somewhere else," he says.

"There will be a solution," he maintains. "We'll get a worship leader. I don't say anymore that we don't have one. I just say they're not here today."