Ukraine crisis updates: What to know as tensions rise 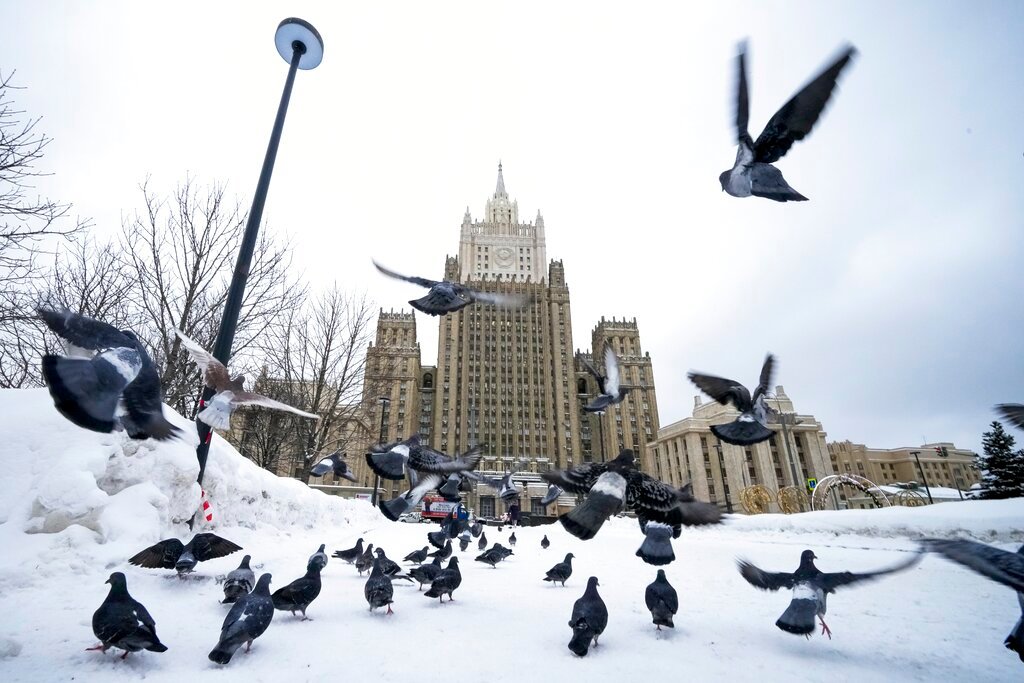 Pigeons take off in front of the Russian Foreign Ministry building in Moscow, Russia, Wednesday, Jan. 26, 2022. Russian Foreign Minister Sergey Lavrov said he and other top officials will advise President Vladimir Putin on the next steps after receiving written replies from the United States to the demands. Those answers are expected this week — even though the U.S. and its allies have already made clear they will reject the top Russian demands. (AP Photo/Alexander Zemlianichenko)
Alexander Zemlianichenko
Posted Thursday, January 27, 2022 11:12 pm
By VANESSA GERA, Associated Press

WARSAW, Poland (AP) — The United States and NATO have made no concessions to the main Russian demands to resolve the crisis over Ukraine, including giving Moscow a guarantee that its western neighbor can never join the alliance.

The focus is now on how Russia will respond — a decision that rests squarely with President Vladimir Putin and one that could determine whether Europe will again be plunged into war.

Here are things to know on Thursday about the international tensions surrounding Ukraine.

HOW HAS RUSSIA RESPONDED?

Kremlin spokesman Dmitry Peskov told reporters that the response from the U.S. — and a similar one from NATO — leaves “little ground for optimism.”

But he added that “there always are prospects for continuing a dialogue, it’s in the interests of both us and the Americans.”

Meanwhile, Russian Foreign Minister Sergey Lavrov noted that the U.S. response contains some elements that could lead to “the start of a serious talk on secondary issues.”

But Lavrov emphasized that “the document contains no positive response on the main issue,” the Russian demands for the non-expansion of NATO and the non-deployment of weapons that Russia views as a threat.

WHAT IS UKRAINE SAYING?

Ukraine’s Foreign Minister Dmytro Kuleba said Kyiv saw the U.S. response before it was delivered on Wednesday to Russia, and had no objections.

He tweeted that it’s “important that the U.S. remains in close contact with Ukraine before and after all contacts with Russia. No decisions on Ukraine without Ukraine.”

Kuleba also emphasized his country’s need to strengthen its defenses, speaking Thursday on a visit to Denmark.

He said Ukraine appreciates all the support it gets, but that the times call for hard power to be prioritized over soft power, citing the importance of weapons, economic sanctions and a consolidated position of Ukraine's allies.

RUSSIA HOPES FOR CHANGE IN KYIV

Medvedev, a deputy head of Russia’s Security Council, said a Russia-NATO conflict “would be the most dramatic and simply catastrophic scenario, and I hope it will never happen.”

Medvedev argued that Moscow sees no point in talking to Ukrainian President Volodymyr Zelenskyy, but voiced hope that the Ukrainians would eventually become “weary of that bedlam and elect the leadership that would pursue policies ... aimed at normal economic relations with Russia.”

Medvedev’s comment follows a British claim that the Kremlin is seeking to replace Ukraine’s government with a pro-Moscow administration — an allegation Russia denies.

WHAT U.S. MILITARY TROOPS ARE ON ALERT?

The U.S. Defense Department says troops from at least 10 bases across the country have been put on higher alert for possible deployment to Europe in the ongoing Ukraine crisis, including Army units from the 82nd Airborne, 101st Airborne and 4th Infantry Divisions.

John Kirby, the Pentagon press secretary, said the department won't disclose the specific units. But the bases include Army combat strongholds and key Air Force locations, including Robins Air Force Base in Georgia, which houses a major logistics complex, and Davis-Monthan Air Force Base in Arizona, where A-10 Thunderbolt close air support aircraft are based.

Defense Secretary Lloyd Austin has put 8,500 troops in the United States on alert for possible deployment to NATO allies in Europe, mainly as part of a NATO response force to deter any wider Russian aggression against Ukraine. The Pentagon has stressed that none of the troops would deploy into Ukraine, and no forces have gotten deployment orders yet.

The units will come from the following Army bases: Fort Bragg, North Carolina; Fort Campbell, Kentucky; Fort Carson, Colorado; Fort Hood, Texas; and Fort Stewart, Georgia. The Air Force bases are Davis-Monthan, Robins and Wright-Patterson in Ohio, along with Joint Base Lewis-McChord in Washington, which houses Army and Air Force units. U.S. troops based in Europe also may be shifted around to other countries as needed.

WHAT DO REGULAR UKRAINIANS SAY?

Ukrainians have joined a campaign on social networks under the hashtag #UkrainiansWillResist amid fears that Russia’s troop buildup near the border heralds plans of an invasion.

Hundreds of Ukrainians at home and abroad have posted the hashtag and have put a Ukrainian flag on their profile pictures. They include celebrities, journalists, activists and politicians, with the campaign growing more popular by the day.

“Nobody can force Ukrainians to accept Putin’s ultimatum. There will not be any ‘peace’ on Russia’s conditions,” Andrii Levus, the campaign initiator, wrote on his Facebook page.

He added: “Even if West will make a deal with Putin over Ukraine and Zelenskyy will capitulate, #UkrainiansWillResist to Russian to occupiers. Welcome to hell, Mr. Putin!”

President Joe Biden warned Ukrainian President Volodymyr Zelenskyy on Thursday that there is a “distinct possibility” that the Russians could invade Ukraine in February, according to White House National Security Council spokesperson Emily Horne.

The exchange happened in a call between the two leaders that was described by the White House as a “check in” to discuss the latest diplomatic efforts.

“He has said this publicly and we have been warning about this for months,” Horne said of Biden's latest comments about rising U.S. concern of a further invasion by Russia of Ukraine.

Biden warned Zelenskyy that the U.S. believed there was a high degree of likelihood that Russia could invade when the ground freezes and Russian forces could attack Ukrainian territory from north of Kyiv, according to two people familiar with the conversation who were not authorized to comment and spoke on the condition of anonymity.

Military experts have said Russia may be waiting for optimal ground conditions to move heavy equipment into Kyiv as part of any invasion. Eight years ago, Russia invaded Ukraine’s Crimean Peninsula in late February.

The White House said in a separate statement that Biden also “reaffirmed the readiness” of the U.S. and allies “to respond decisively” if Russia further invades Ukrainian territory.

Zelenskyy said on Twitter following the call that he and Biden also discussed possibilities “for financial support to Ukraine” and that he thanked Biden for U.S. military assistance. It was the third call between the two leaders since last month.

The White House confirmed that Biden told Zelenskyy he was “exploring additional macroeconomic support to help Ukraine’s economy” as it comes under pressure as a result of the Russian military buildup along its borders.

The U.N. Security Council will hold an open meeting Monday on what U.S. Ambassador Linda Thomas-Greenfield called “Russia’s threatening behavior against Ukraine and the build-up of Russian troops on Ukraine’s borders and in Belarus.”

She said Thursday that the deployment of more than 100,000 troops on the Ukrainian border and other destabilizing acts aimed at the country pose “a clear threat to international peace and security and the U.N. Charter.”

Thomas-Greenfield said Security Council members “must squarely examine the facts and consider what is at stake for Ukraine, for Russia, for Europe, and for the core obligations and principles of the international order should Russia further invade Ukraine.”

“This is not a moment to wait and see,” she said in a statement. “The council’s full attention is needed now, and we look forward to direct and purposeful discussion on Monday.”

Norway holds the presidency of the council in January and Monday is its last day presiding over the U.N.’s most powerful body. Russia takes over the presidency for the month of February on Tuesday. The council president has some control over its agenda.

The White House announced that President Joe Biden and new German Chancellor Olaf Scholz will discuss Russian aggression toward Ukraine during a meeting next month in Washington.

The one-on-one meeting will be Scholz’s first Oval Office meeting since he took over leadership of his country in December.

Germany’s refusal to join the U.S. and other NATO members in providing weapons to Ukraine has annoyed some allies and raised questions about Berlin’s resolve in standing up to Russia.

Experts say Germany’s position is partly rooted in its history of aggression during the 20th century.

German Foreign Minister Annalena Baerbock said her government is closely coordinating its policy with its allies, and the range of options Berlin will consider in the event of renewed Russian aggression includes action against the Nord Stream 2 gas pipeline.

The pipeline, which hasn’t begun operation yet, was built to pump natural gas from Russia to Germany, but Berlin has gradually backed away from the project amid growing tensions with Moscow.

Baerbock said Thursday that while Germany has refused to supply weapons to Ukraine, it will continue to provide economic support to Kyiv.

“A (soccer) team doesn’t need 11 center forwards who all do the same thing, but 11 players who get along well and have a common game plan in mind,” she told lawmakers.

FRANCE TAKES ITS OWN PATH

French President Emmanuel Macron continues to push for dialogue with Russia despite signs pointing to a potential war, convinced that diplomacy can still avert conflict.

Macron is preparing to talk Friday with Putin, and Macron’s presidential palace hosted marathon talks Wednesday between Russian and Ukrainian advisers, the first such face-to-face negotiations since Russia massed troops near Ukraine in recent weeks.

Macron's stance reflects France’s post-World War II tradition of carving its own geopolitical path, refusing to line up blindly behind the U.S.

But France’s diplomacy-focused strategy complicates efforts by the U.S. and NATO to show a tough, united front against Russia. Experts question whether it will be enough to deter a Russian invasion.

WHAT ABOUT NATO MEMBER TURKEY?

Turkish President Recep Tayyip Erdogan says an armed attack on Ukraine by Russia wouldn’t be a “rational” move, and is offering to mediate between the two countries.

“I hope that Russia will not resort to armed attack and occupation of Ukraine,” Erdogan told Turkey’s NTV television late Wednesday. “Such a step would not be a rational move for Russia or for our region.”

A statement Thursday at the end of a National Security Council meeting chaired by Erdogan said an “escalation of tensions would not be to anyone’s benefit.”