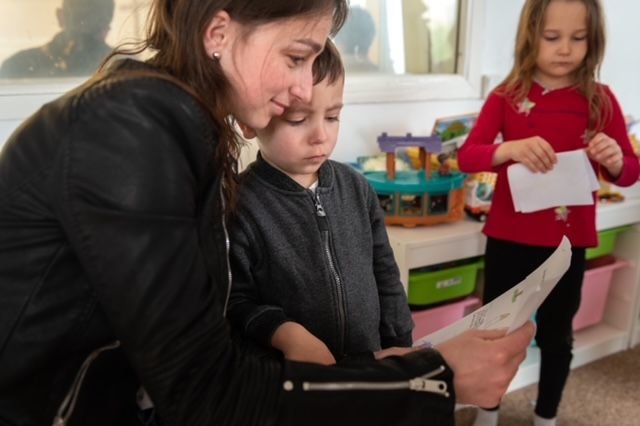 A Ukrainian boy and his mother look at a picture drawn by Madison, 11, of First Baptist Church in Comanche, Okla. 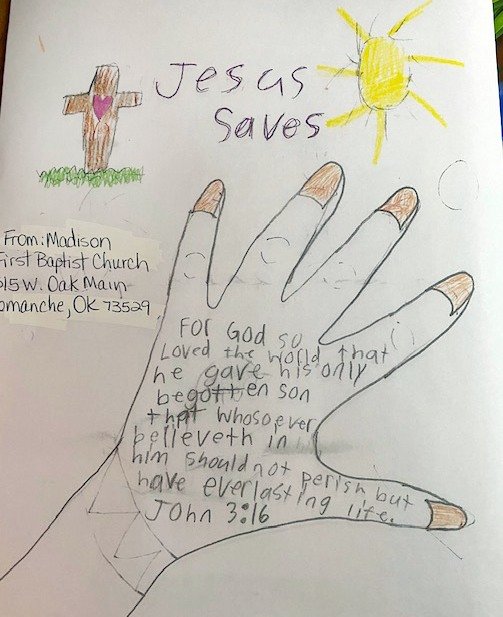 Hall’s idea for children and moms in the church to write letters of encouragement that would point the Ukrainian refugees “to the hope they could have in Jesus Christ,” is spreading across Oklahoma and the nation.

Twice so far, children (and some mothers) from Ukraine living for the time being in Prague, have received “gifts” – letters and drawings – from Oklahoma.

Hall and her husband, Pastor Mark Hall, now of First Baptist Church in Comanche, Okla., have been in ministry together for the 39 years they’ve been married. While she’s done “everything” in church ministry, she has a special place in her heart for children, she said. All children.

News reports of families evacuating Ukraine as bombs fell around them, only to have their dads, after getting them to safety, leaving to fight for their country, gripped Hall’s heart. She wanted to do something, and thought to enlist the help of her Sunday morning students in the fourth and fifth grades.

“I explained how children and families were evacuating to a safer place, and asked my kiddos how they would feel if they had to leave home in a hurry,” Hall said. “I wanted them to empathize with them.

“They were sad,” Hall continued. “I told them the only help we can give from this distance is to pray and give them a word of encouragement, to tell them we are praying for them. They decided they wanted to send them letters, and some decided to draw pictures.”

Within a week Hall was given 75 pieces to mail, including one drawing that was photocopied 50 times.

The letters went to Elisabeth (first name only for security), one of Hall’s relatives, who with her husband from London serve as the strategic leaders for the International Mission Board’s European Affinity Group.

“More and more letters would arrive every day through the post and it was such a joy to see that each one was crafted so lovingly with a drawing and a message of hope,” Elisabeth wrote in an email to Baptist Press.

One group of letters and drawings were distributed at a Russian-speaking church in Prague, where IMB missionary Dalese attends services.

“They had refugee children who were there with their mothers to attend the service on Orthodox Easter as well as Russian and Ukrainian children who attend the church regularly, about 70 kids in all,” Elisabeth wrote. “The pastor asked our IMB missionary to stand up at the beginning of the service and share with them how their friends in the United States had been praying for them and had sent them letters to encourage them.”

Elisabeth quoted the onsite IMB missionary: “It was so sweet to see them get so excited about the ‘gift’ that had come to them from America in the form of these letters and cards.”

The other group of letters went to Ukrainians staying temporarily in a government-run hotel in Prague.

Elisabeth said as the mothers find work, they sometimes move into more permanent housing. And then they need something for the children to do during the day. A few local Russian-speaking churches are caring for these children five days a week, providing activities and snacks as well as Bible stories, English lessons and fellowship for the moms.

“Our IMB involvement is as volunteer staff to aid the efforts of these local churches who are working tirelessly to care and share the love of Christ with these displaced peoples,” she said. Part of that care has been sharing letters and drawings from other children far away.

Seven-year-old Boone, who attends Village Baptist Church in Oklahoma City, wrote a letter because “We love them” and “so they know people care about them.”

Mady, also 7 and from Village Baptist, said she wanted to tell them about Jesus, and “I want them to know they can learn more about God and Jesus.”

Elise, 8, of Village Baptist wanted to “help them be encouraged knowing that we are praying for them,” and “that God is with them.”

Marcus, 5, “had a fantastic time at church and the teaching in Ukraine touched him. … He prayed for them yesterday,” Marcus’ mother wrote to his teacher at Village Baptist, Melissa Lowery.

At First Comanche, Madison, 11, said the drawing she made that included two Scripture verses, was “so kids would feel better,” and “to know that I love them and they are special and that God loves them, too.”

Almost two-thirds of Ukraine’s 7.5 million children had been displaced during the first six weeks of the Russian invasion, according to UNICEF, the United Nation’s children’s agency.