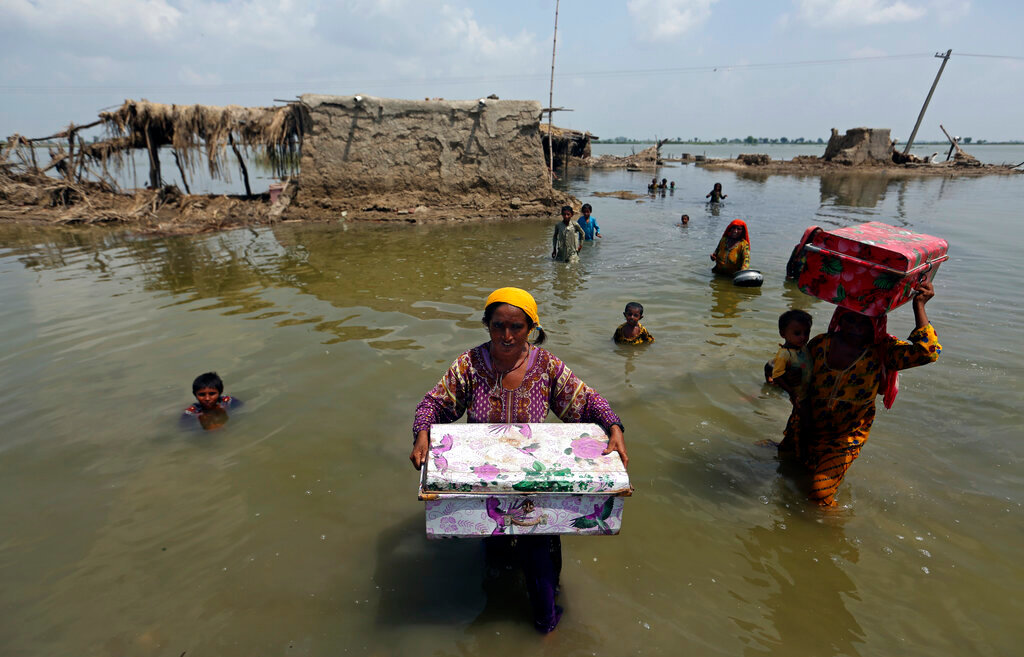 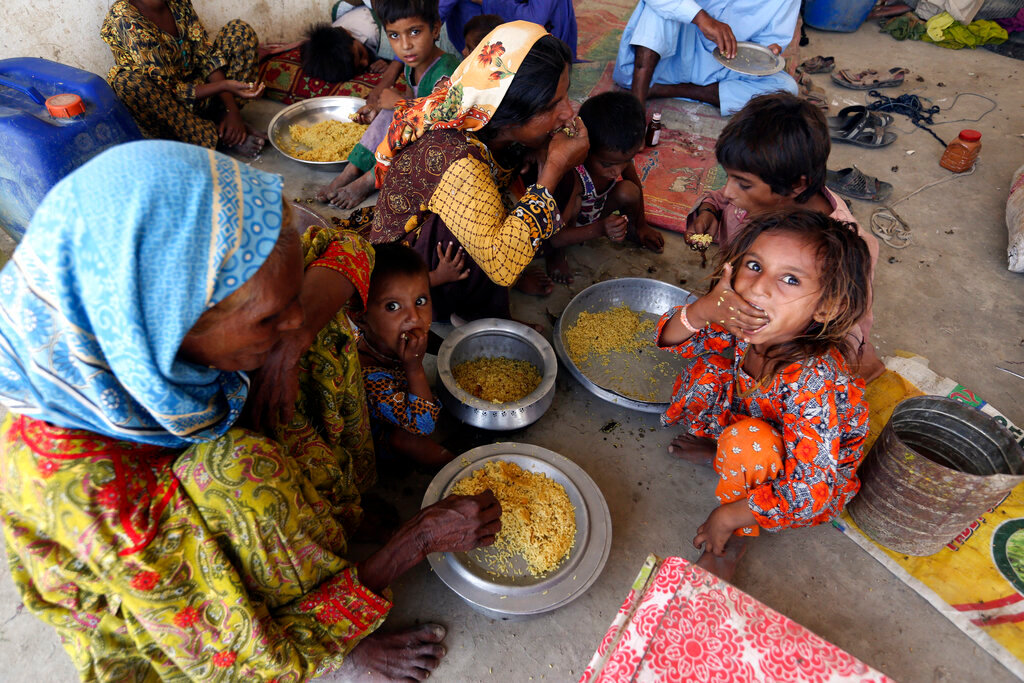 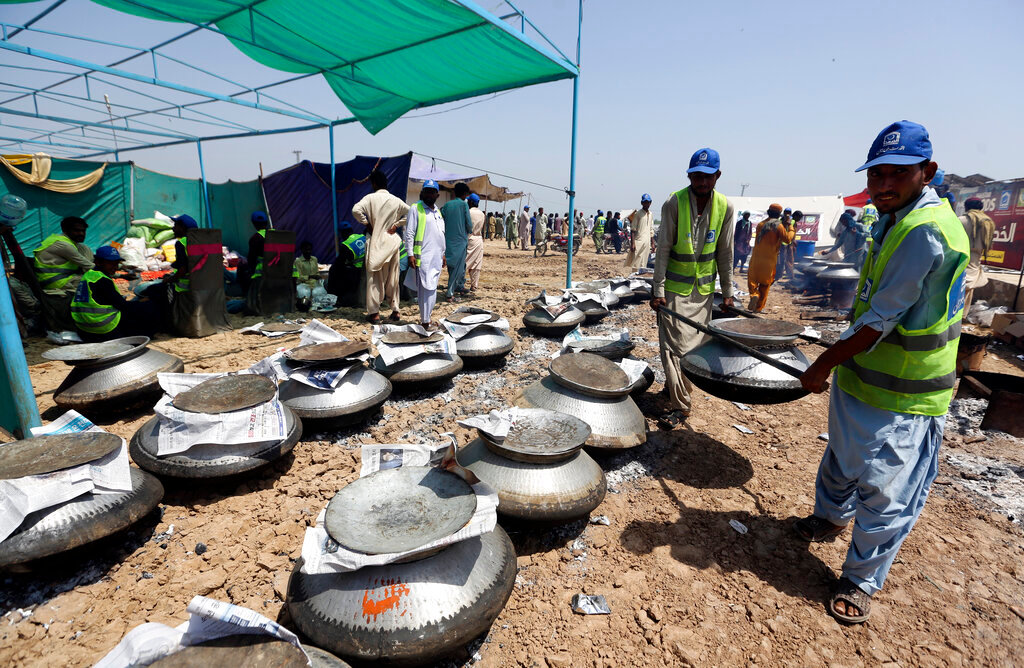 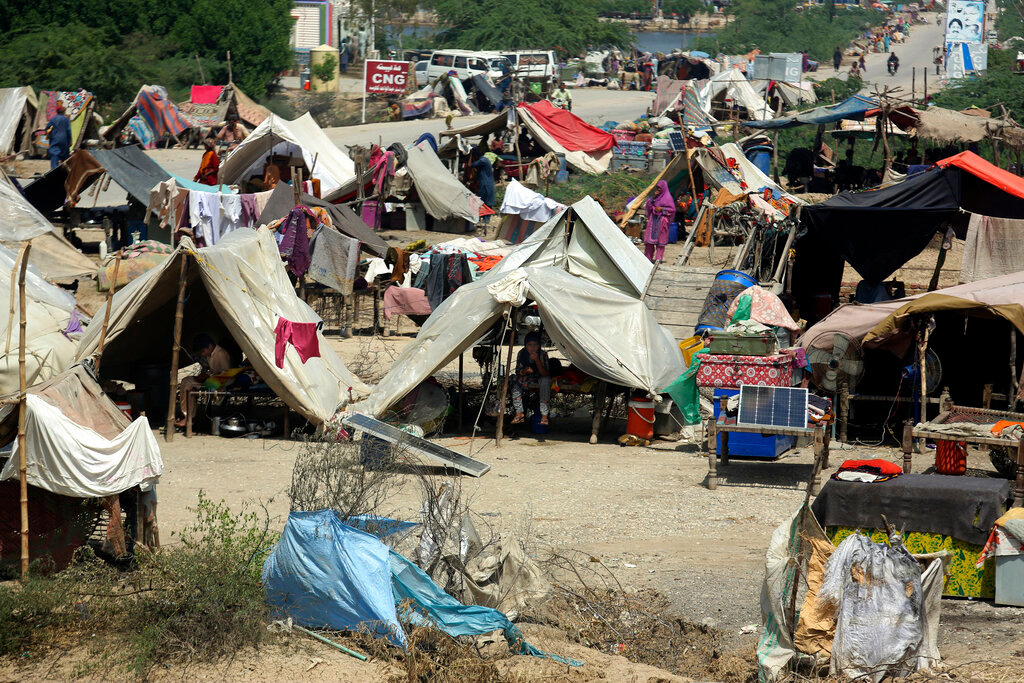 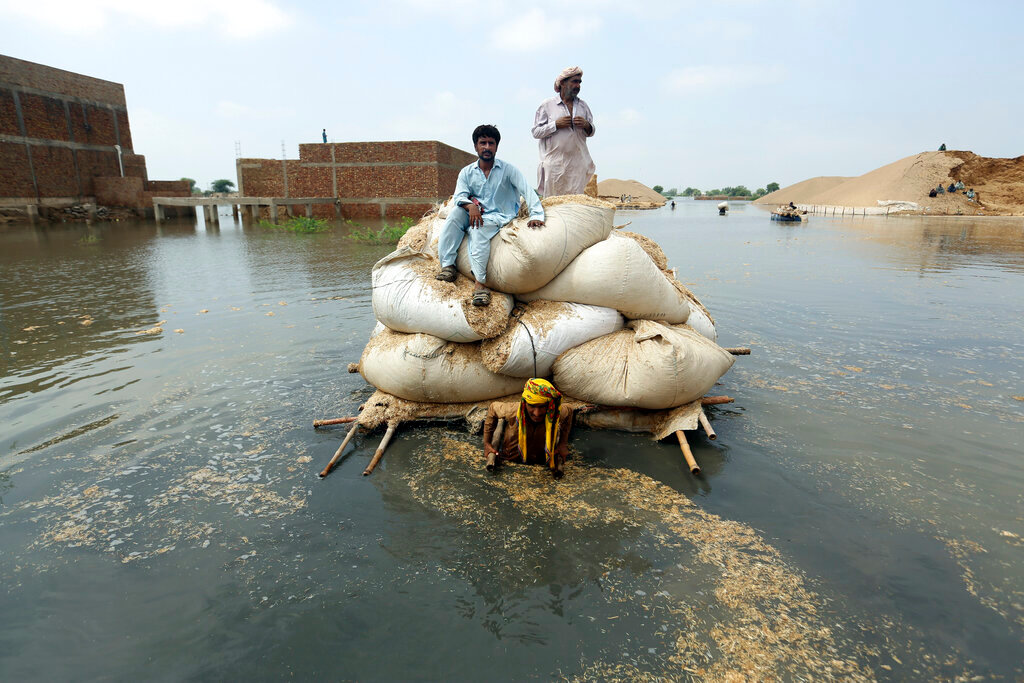 Victims of the flooding from monsoon rains use a makeshift barge to carry hay for cattle, in Jaffarabad, a district of Pakistan's southwestern Baluchistan province, Monday, Sept. 5, 2022. (AP Photo/Fareed Khan) 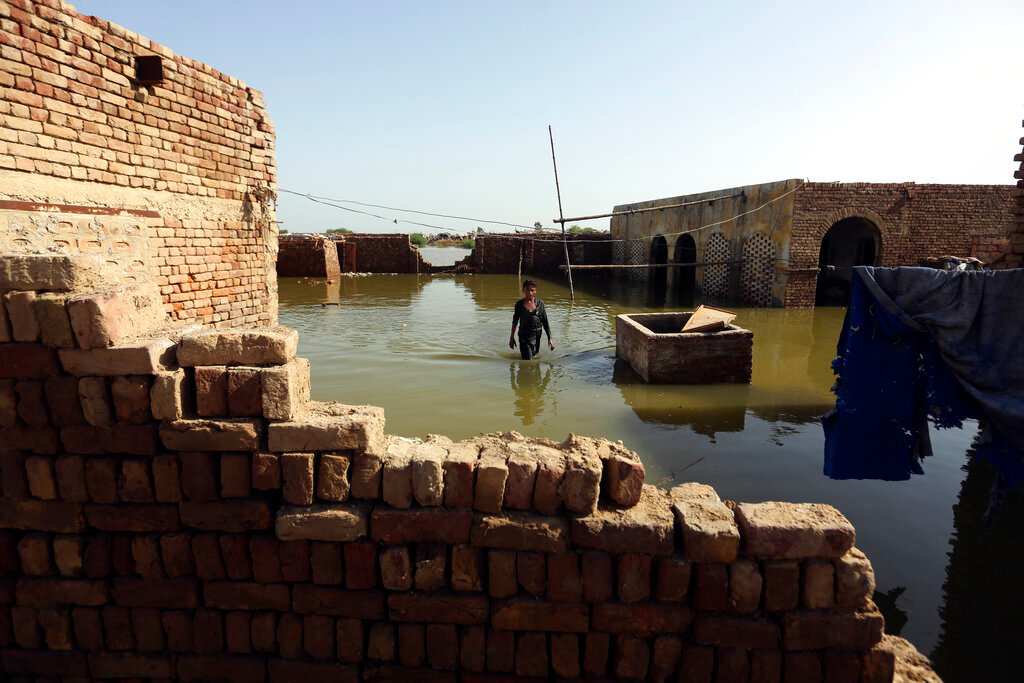 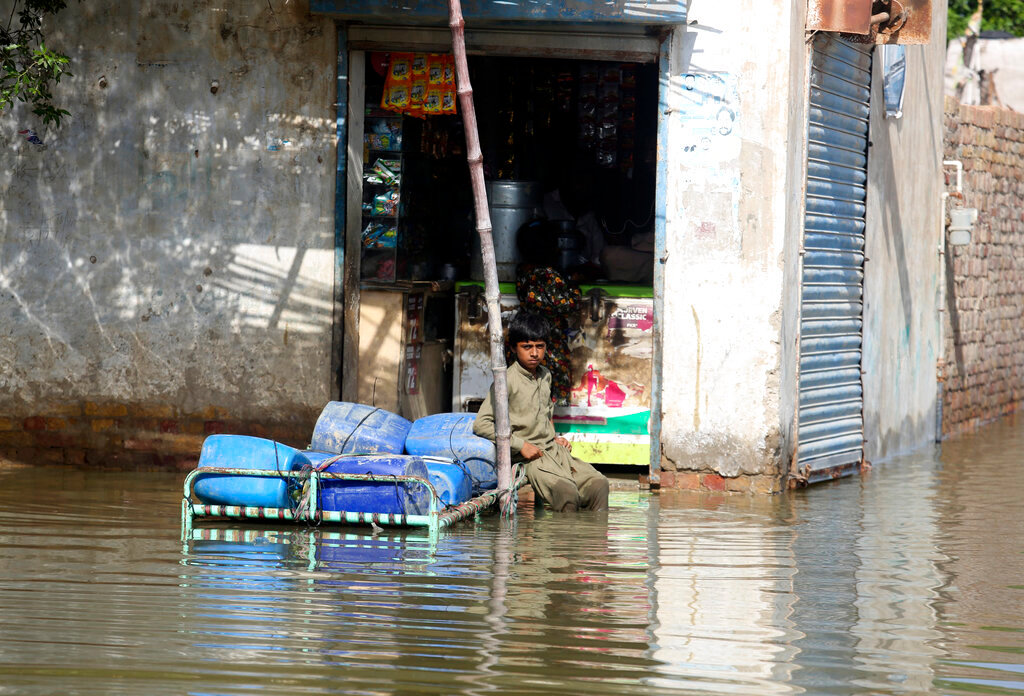 A victim of flooding from monsoon rains sits in front of a shop in Jaffarabad, Pakistan, Monday, Sept. 5, 2022. (AP Photo/Fareed Khan) 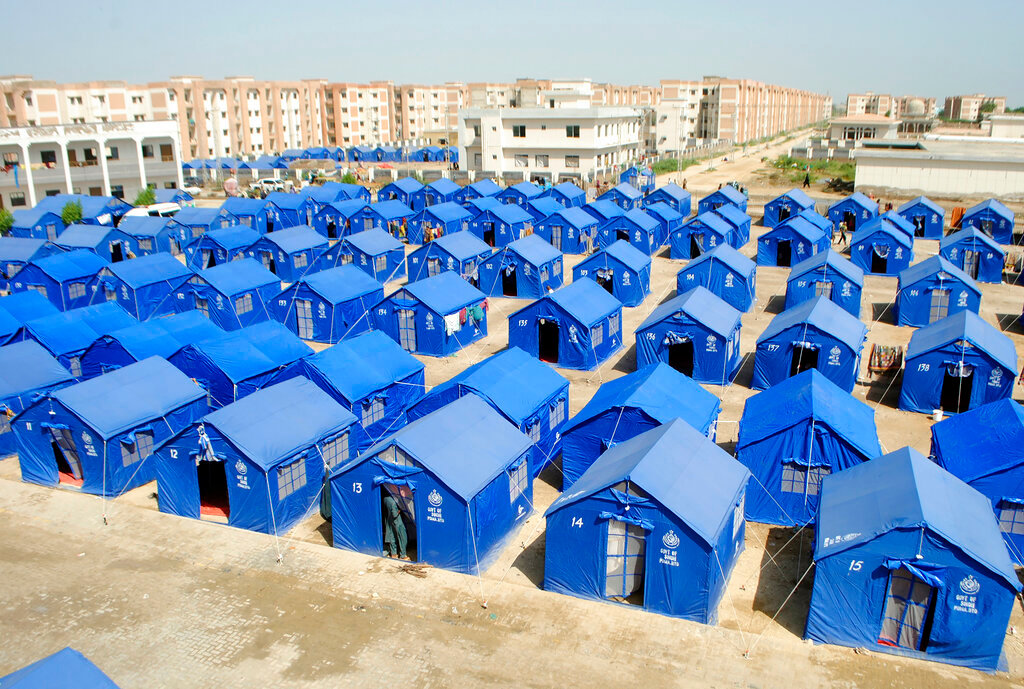 Two UNHCR planes touched down in the southern port city of Karachi and two more were expected later in the day. A third plane, with aid from Turkmenistan also landed in Karachi. While the floods in recent weeks have touched much of Pakistan, the southern Sindh province, where Karachi is the capital, has been the most affected.

More than 1,300 people have been killed and millions have lost their homes in flooding caused by unusually heavy monsoon rains in Pakistan this year.

On Sunday, engineers cut into an embankment in the sides of Lake Manchar in an effort to release rising floodwater to save the city of Sehwan and several nearby villages from possible destruction by flooding, which has damaged 1.6 million houses since mid-June.

Prime Minister Shahbaz Sharif was met by Foreign Minister Bilawal Bhutto in the city of Sukkur on the swelling Indus River, from where they toured the flood-hit areas by helicopter. Murad Ali Shah, the province's chief minister, briefed Sharif about the damages caused by floods in Sindh.

Floods have affected more than 3.3 million in this Islamic nation of 220 million and the devastation has caused $10 billion in damage, according to government estimates. The provinces of Punjab, Sindh, Baluchistan and Khyber Pakhtunkhwa have been the most affected and the majority of people killed were women and children.

Floodwaters were receding in Punjab, Khyber Pakhtunkhwa and Baluchistan provinces, but the situation was alarming across Sindh province. Hundreds were leaving the district of Jaffarabad after their homes were flooded.

“Our homes are right now inundated," said Khadim Khoso, 45, recounting how he waded through chest-high water. He said he and his family left their home once the floodwaters brought in the snakes.

“No government help has reached here," he said. However, authorities say they are doing their best to deliver aid to flood victims.

Afghan refugees living in Pakistan have also been affected by the floods. Pakistan has hosted millions of Afghans fleeing the violence in their country over the past four decades and currently has about 1.3 million registered Afghan refugees.

More than 420,000 Afghan refugees are estimated to be in the worst-affected areas in Pakistan, living side by side with their host communities.

Also Sunday, UNICEF delivered relief supplies, including medicines and water-purifying tablets, as part of the U.N. flash appeal for $160 million to support Pakistan's flood response. UNICEF is also appealing for $37 million for children and families.

“The floods have left children and families out in the open with no access to the basic necessities of life,” said Abdullah Fadil, UNICEF's representative in Pakistan.

Planes carrying aid from other countries are also expected later Monday in response to an appeal from Sharif, who has appealed to the international community to help Pakistan.

With the two UNHCR planes, 38 planes have brought in aid from countries including China, Qatar, the United Arab Emirates, and Uzbekistan.