US births rose last year but still less than before pandemic 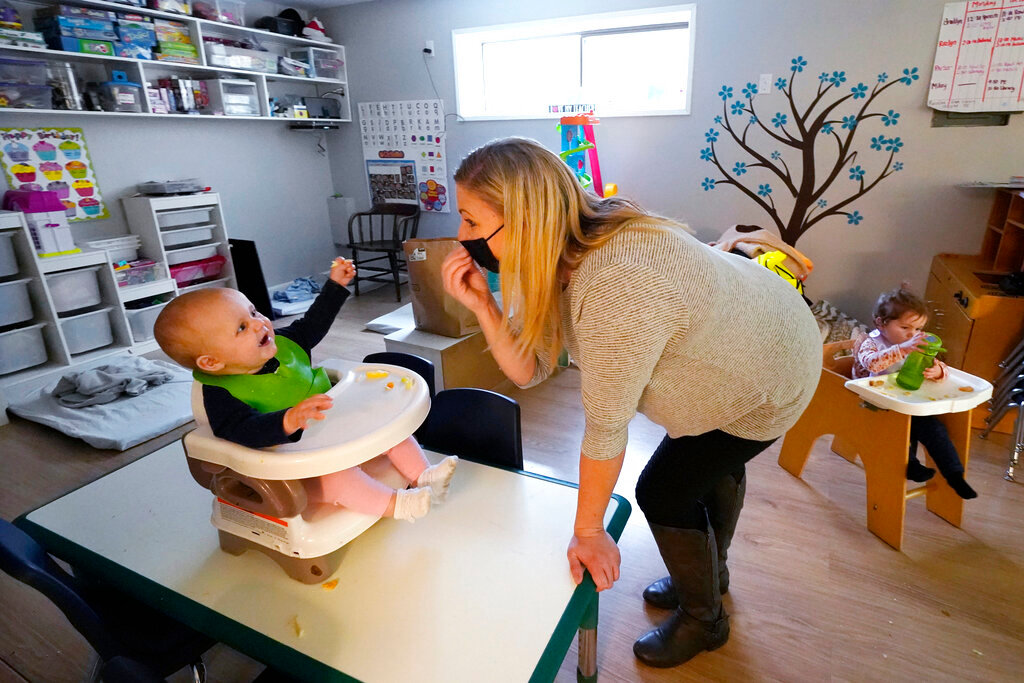 Amy McCoy signs to a baby about food as a toddler finishes lunch behind at her Forever Young Daycare facility, Monday, Oct. 25, 2021, in Mountlake Terrace, Wash. (AP Photo/Elaine Thompson, File)
Posted Tuesday, May 24, 2022 7:56 am
By MIKE STOBBE, The Associated Press

NEW YORK (AP) — U.S. births bumped up last year, but the number of babies born was still lower than before the coronavirus pandemic.

The small 1% increase was a bit of a rebound from 2020, the first year of the pandemic, which witnessed the largest one-year drop in the U.S. births in nearly 50 years.

But there were still about 86,000 fewer births last year than in 2019, according to a government report released Tuesday.

U.S. births had been declining for more than a decade before COVID-19 hit, and “I would expect that we would continue to see small, modest decreases,” she said.

Officials think last year's uptick reflects births from pregnancies that had been put off during the uncertain early days of the pandemic. Deliveries were way down in January 2021, but improved as the year went on, said Brady Hamilton of the U.S. Centers for Disease Control and Prevention. Much of the increase was seen in older moms.

"These are births that were postponed,” said Hamilton, lead author of the new report.

The report is based on a review of nearly all birth certificates issued last year.

Some of the key findings:

— Nearly 3.7 million births were reported last year, up from the roughly 3.6 million recorded in 2020.

— Birth rates rose 1% for Hispanic women and 3% for white women. But they fell 1% for Asian women, 3% for Black women, and 4% Native American and Alaska Native women. That may reflect the pandemic's harsher impact on the health and lives of some racial groups, experts said.

—The U.S. was once among only a few developed countries with a fertility rate that ensured each generation had enough children to replace itself — about 2.1 kids per woman. But it’s been sliding, and in 2020 dropped to about 1.6, the lowest rate on record. It rose slightly last year, to nearly 1.7.

The premature birth rate had declined slightly in 2020, and health officials aren't sure why the increase occurred. But older moms are more likely to have preterm births, as are women infected with COVID-19, said the CDC's Joyce Martin, a study co-author.