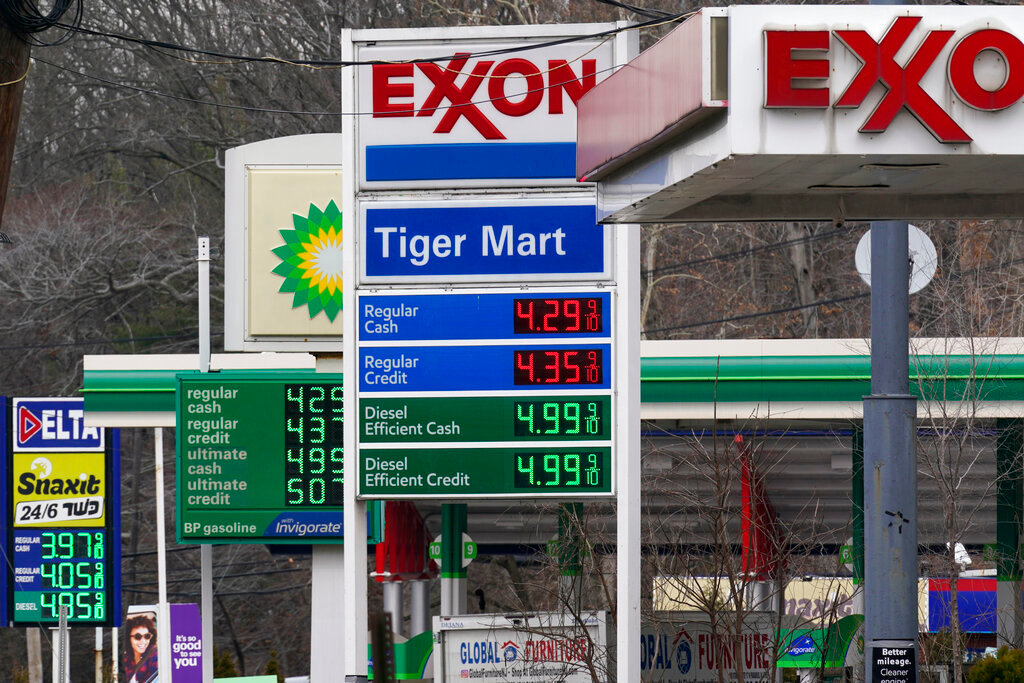 Gasoline prices are pushing even farther above $4 a gallon, the highest price that American motorists have faced since July 2008, as calls grow to ban imports of Russian oil.

Prices at the pump were rising long before Russia invaded Ukraine and have spiraled faster since the start of the war. The U.S. national average for a gallon of gasoline has soared 45 cents a gallon in the past week and topped $4.06 on Monday, according to auto club AAA.

“I am looking at the possibility of walking to work,” said Asiya Joseph, who had just paid $4.29 a gallon at a BP station in Brooklyn, New York. “This is the first time that I am filling up my tank in like, 10 days.”

The price of regular broke $4 a gallon on Sunday for the first time in nearly 14 years and is now up nearly 50% from a year ago.

The price is even higher in Europe, averaging 1.75 euros per liter last week, according to the European Commission, the equivalent of $7.21 per gallon.

GasBuddy, which tracks prices down to the service-station level, said Monday that the U.S. was likely to break its record price of $4.10 a gallon, but that does not account for inflation. In today's terms, the record price would be equal to about $5.24 after accounting for inflation.

“Forget the $4 per gallon mark, the nation will soon set new all-time record highs and we could push closer to a national average of $4.50," said GasBuddy analyst Patrick De Haan. “We’ve never been in this situation before, with this level of uncertainty. ... Americans will be feeling the pain of the rise in prices for quite some time."

Energy prices are contributing to the worst inflation that Americans have seen in 40 years, far outpacing higher wages. Consumer prices jumped 7.5% in January, compared with a year earlier, and analysts predict a 7.9% increase when the government reports February figures later this week.

Oil prices soared early Monday before retreating. Benchmark U.S. crude surged to $130 a barrel overnight, then moderated to around $119, a 3% gain, in afternoon trading. The international price skyrocketed to $139 before falling back to about $123 a barrel. Major U.S. stock indexes were down more than 2%.

The United States is the world's largest oil producer — ahead of Saudi Arabia and Russia — but it is also the biggest oil consumer, and it can't meet that staggering demand with domestic crude alone.

The U.S. imported 245 million barrels of oil from Russia last year — about 8% of all U.S. oil imports — up from 198 million barrels in 2020. That's less than the U.S. gets from Canada or Mexico but more than it imported last year from Saudi Arabia.

The increasingly violent Russian attack on Ukraine has increased calls to cut off Russia from the money it gets from oil and natural gas exports. Europe is heavily dependent on Russian gas.

President Joe Biden has been reluctant to ban Russian oil, fearing it could further fuel inflation heading into the midterm elections this November.

Many Republicans and a growing number of Democrats in the House and Senate, including House Speaker Nancy Pelosi, D-Calif., have endorsed banning Russian crude as a way to put more pressure on Russian President Vladimir Putin. The White House hasn’t ruled out a ban, and Secretary of State Antony Blinken said Sunday that the United States and its allies were discussing a ban “while making sure that there is still an appropriate supply of oil" on the world market.

Talk of a ban on Russian oil has led U.S. officials to consider other sources that are currently limited. In what was supposed to be a secret trip, senior U.S. officials traveled to Venezuela over the weekend to discuss the chance of easing oil sanctions on the major crude-exporting country.

Ronnie James, an Uber driver in Brooklyn, wants the government to do something to bring prices down — get oil from Venezuela or tap more from the Strategic Petroleum Reserve.

“The folks who are every day building the wealth of this nation could use a break,” he said.