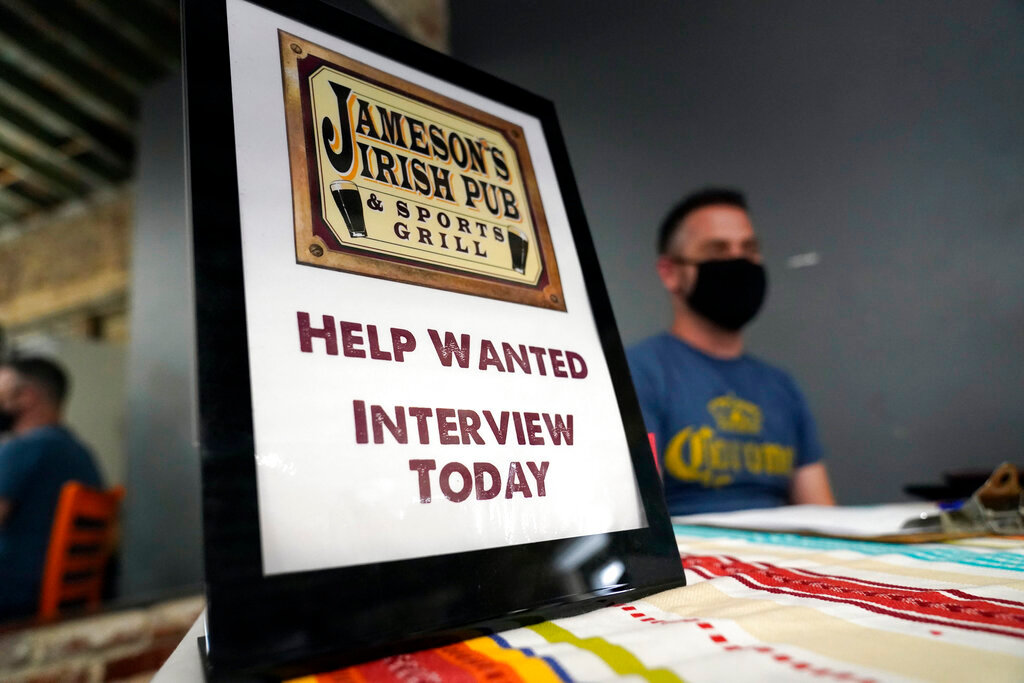 A hiring sign is shown at a booth for Jameson's Irish Pub during a job fair on Sept. 22, 2021, in the West Hollywood section of Los Angeles. Hiring in California slowed significantly in November 2021 even as the state's unemployment rate dipped below 7% for the first time since March 2020, at the start of the pandemic, according to data made public Friday, Dec. 17, 2021. (AP Photo/Marcio Jose Sanchez, File)
Marcio Jose Sanchez
Posted Thursday, December 23, 2021 8:47 am
By PAUL WISEMAN, AP Economics Writer

The number of Americans applying for unemployment benefits was unchanged last week, remaining at a historically low level that reflects the job market's strong recovery from the coronavirus recession last year.

Jobless claims remained at 205,000. The four-week average, which smooths out week-to-week ups and downs, rose to just over 206,000. The numbers suggest that the spread of the omicron variant did not immediately trigger a wave of layoffs.

The weekly claims numbers, a proxy for layoffs, have fallen steadily most of the year. Employers are reluctant to let workers go at a time when it's so tough to find replacements. The United States had a near-record 11 million job openings in October, and 4.2 million Americans quit their jobs — just off September's record 4.4 million — because there are so many opportunities.

The job market has bounced back from last year's brief but intense coronavirus recession. When COVID hit, governments ordered lockdowns, consumers hunkered down at home and many businesses closed or cut back hours. Employers slashed more than 22 million jobs in March and April 2020, and the unemployment rate rocketed to 14.8%.

But massive government spending — and eventually the rollout of vaccines — brought the economy back. Employers have added 18.5 million jobs since April 2020, still leaving the U.S. still 3.9 million jobs short of what it had before the pandemic. The unemployment rate has fallen to 4.2%, close to what economists consider full employment.