Vacation Bible School not out of anyone's reach

"It's usually because they don't have enough money or enough volunteers," says Carter, Georgia Baptist Mission Board state missionary in Groups and Faith Development. On June 10, Carter stopped by Island Creek Baptist Church outside of Sparta after having finished a speaking engagement in Waycross the night before. Days earlier, she'd heard how the church, founded in 1794, had never held a VBS before this year.

Leaders at Island Creek cited Carter's reasons for the lack of the summer event so common for most churches. And, from their own experience as well as Carter's observation, they couldn't have expected the rewards for both participants and volunteers.

"When I went to Island Creek on Saturday morning, I saw lots of adults working together to make sure their VBS was a success," Carter testifies. "This is one aspect of VBS sometimes overlooked – it brings the members together for a common cause. Everyone was happy to be there, happy to be using their gifts and talents, happy to be reaching the kids in their community."

Though it's too late to plan for a Vacation Bible School this summer, Carter warns against dismissing future options.

Island Creek, for example, used a curriculum formatted to be used over a weekend. "Several churches have tweaked LifeWay's VBS to make it work for the weekend," Carter points out. "LifeWay also publishes a Backyard Kids Club that would work well for a weekend as well as Zip For Kids, which is extremely flexible." 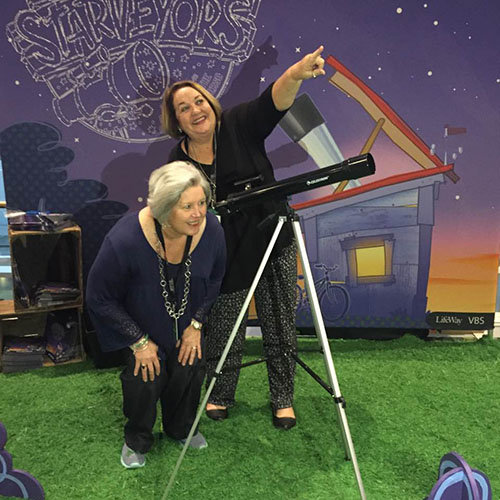 And though it's hard to imagine Vacation Bible School taking place any other time of the year, that's not the case with everyone.

"One church in south Georgia has their VBS during fall break and they love it!" she exclaims.

Carter urges churches to not lose site of benefits from Vacation Bible School. Those include building the church's presence in the community through outreach as well as deepening relationships among volunteers.

Years ago, her music minister's wife pulled Carter, then 14, aside during VBS. They needed more help with children's music, and deemed the teenager a worthy leader. Carter, now 60, never went back to being a VBS "participant," per se.

Since then, she's directed Vacation Bible Schools as a church leader throughout Georgia and Alabama, where she lived for a time. In the 90s Carter began leading VBS conferences for Georgia Baptists and served as VBS director for Macon (now Mid-State) Baptist Association.

In fact, Carter hasn't missed Vacation Bible School as far back as she can remember. The closest came the year her youngest daughter was born during VBS week. And even then, Carter was counting pennies for the missions offering until she had to go to the hospital for delivery.

In 2013, she joined Groups and Faith Development as a state missionary, one of her assignments being VBS strategies coordinator. In that time, she's overseen or taught approximately 82 VBS training conferences.

"It's one of the best ministries churches can utilize to draw families. And, it continues to result in more baptisms than any other ministry," she says. "I want to help churches have a successful VBS, but also educate them that it's not so much about the experience. It's also about building relationships with families and helping them know how to have a relationship with Jesus."