Veteran from Georgia recalls car bomb that strengthened his faith 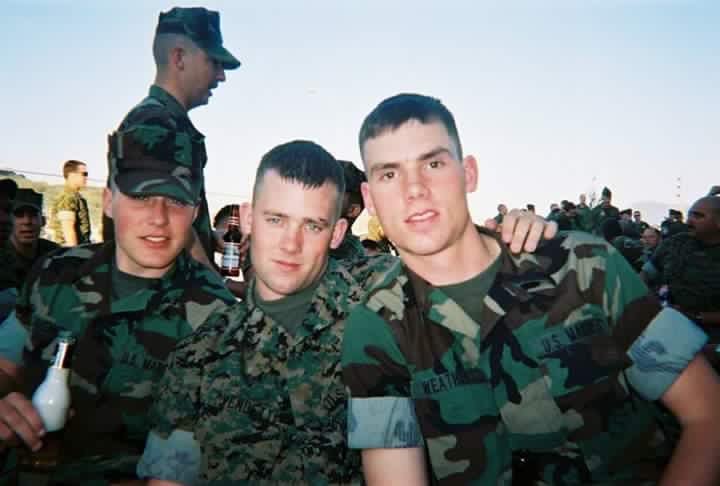 CARTERSVILLE, Ga. (BP) – The look in his gunner’s eyes told Marine Cpl. Daniel Weathers that danger approached from behind.

A 21-year-old on his second tour in Iraq, Weathers was guarding an abandoned police station in Haditha on Oct. 4, 2004. Earlier that day, a car bomb had killed many in a crowd gathered for training, but also caused police to leave the station. Weathers and his squad were under orders to provide security as engineers went through the building to gather equipment and weapons, preventing them from falling into insurgent hands.

“I was the team leader and put guys into place, using our Humvees at either end of this alley to block off the front of the station,” he recalled to Baptist Press. “About 10 minutes after getting there I was talking to our gunner in the top of a Humvee and had my back to the main road. All of a sudden he got a real serious look toward the highway.”

Weathers barely had time to turn and glimpse the 1970s model SUV that had left the road and was now chewing up sand, the driver bearing down at full speed. The detonation came no more than 20 feet from where he stood.

“The whole earth disappeared from the blast,” he said. “I felt like I was consumed by heat and was on fire. It blew me backwards and I landed toward the back of my Humvee. All of these car parts were raining down out of the sky, chunks of metal on fire.

“I was burned up and thought one of those big pieces was going to fall on me and kill me. So, I rolled over under my truck for a second until everything stopped raining down.”

Barely able to hear or see, others pulled him out and immediately began working on his injuries.

The neck protector on his flak jacket, similar in size to the raised collar of a polo shirt, deflected shrapnel that peeled off a section of skin on Weathers’ neck but otherwise would have gone straight through it. A grenade on his chest took a direct hit but, as it is designed to do in such circumstances, did not detonate. Nevertheless, seeing the destroyed grenade’s powder scattered over his chest was unnerving.

His injuries became more apparent on the way to get treatment. Shrapnel missed his left shinbone by a millimeter but “blew a big hole in the muscle tissue” in his leg. Another appeared in his right leg, also near his shin. His right bicep was hit as well as the side of his neck.

Military doctors worked on him in Iraq before he was sent to recover for a week in Germany. From there, he returned to America and completed the final months of his tour while undergoing rehab at Camp Lejeune. He was honorably discharged in June 2005.

Along with Weathers, three others were injured in the attack. The driver of the other Humvee was hit in the leg and fortunate to keep it. Another received a laceration to his forehead. The Marine who had been talking to Weathers was knocked back into the Humvee and relatively unhurt, though the top of the vehicle was completely in flames.

If there was a case of a vehicle carrying too many explosives to achieve its objective, this was it. Little more than a 10-foot crater remained of the SUV, the engine block landing 40 yards away. A smaller explosion would have actually left bigger pieces of shrapnel and caused more damage, likely killing Weathers and others.

Veterans Day, obviously, holds a special place for him. Weathers’ battalion had been training for a major offensive in Fallujah that would become Operation Phantom Fury and be known as the highest point of conflict in the Iraq War. The car bomb early in the day and subsequent call for his squad to provide security changed his participation in it.

“My group went, and I lost quite a few buddies there,” he said. “I felt guilty that I didn’t go with them, but I think of how God may have spared me from going because I would have been killed, too.”

Upon being discharged, Weathers returned to his hometown of Cartersville, Ga., married his girlfriend, Katie, and joined First Baptist Church. His mother had been a single parent to him and his brothers, but made sure they attended church growing up. He did youth group things and enjoyed going on trips, but his relationship with Christ while in the Corps had become distant.

The time recovering from his injuries changed that.

“It made me appreciate what I didn’t have before and become stronger in my faith,” he said. “It wasn’t always smooth, though. I give Katie a lot of credit for getting me back into church, because it was a rough couple of years after I got out of the Corps. I was never diagnosed with PTSD, but I think I had it. I did a lot of drinking. But she was faithful and pulled me through that dark time, getting me involved at First Baptist.

“The experience [in Iraq] ultimately made me a stronger person. I pay attention more now and feel God has a purpose for me.”

The couple, who have a daughter, Ella, served as volunteers in the children’s ministry before becoming a part of the hospitality and welcome teams.

Weathers enlisted in the Marines shortly after graduating from Cass High School in May 2001. One morning that September he was on the rifle range during boot camp on Parris Island when everyone was called together. There had been an attack in New York and those recruits with family in the affected area were allowed to leave and get communication.

“There was no TV around, so it was a long day of us listening to the radio for information when we could,” he said.

Weathers, a member of the 1st Battalion, 8th Marines, was slotted for the 26th MEU (Marine Expeditionary Unit). His first deployment came in March 2002 when his team joined the Shock and Awe campaign as part of the first wave into Iraq from the north. The hectic pace contributed to his not even seeing footage of the 9/11 attacks until the second anniversary in 2003.

He continues to protect and serve, now as an investigator in his 16th year with the Bartow County Sherriff’s Office. A Bible passage familiar to any service member, regardless of faith background, still holds true.

“When I was young and had just gotten into the Marines, I thought I was invincible. Even so, everyone knows Psalm 23,” he said. “You walk through the valley of the shadow of death, but fear no evil.”