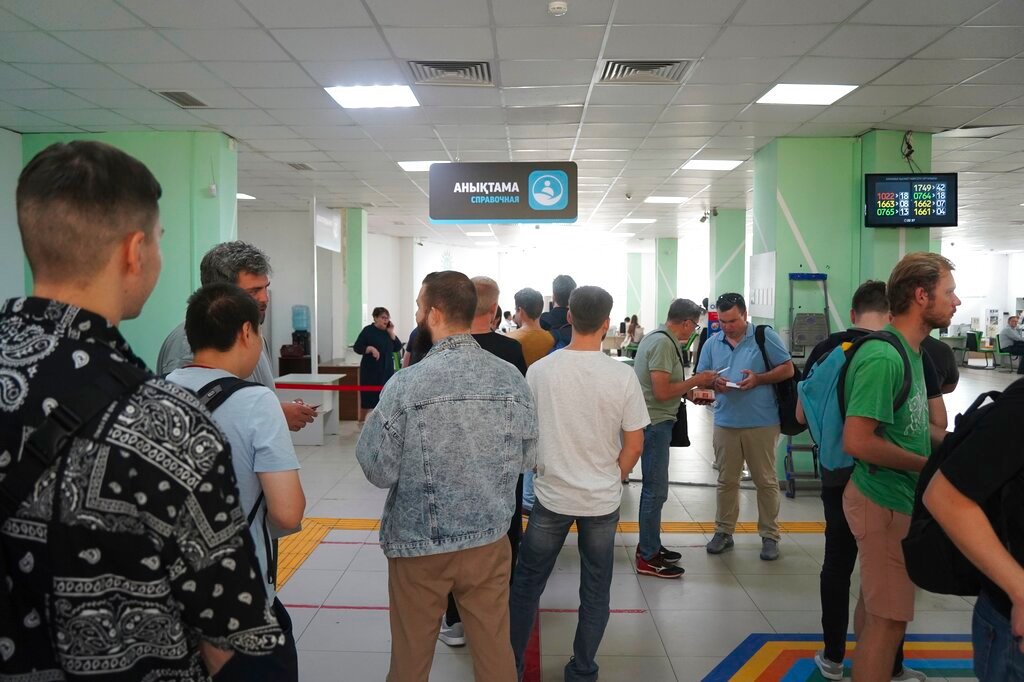 Russian men line up to get a Kazakhstan Personal Identification Number in a public service center in Almaty, Kazakhstan, Tuesday, Sept. 27, 2022. (Vladimir Tretyakov/NUR.KZ via AP) 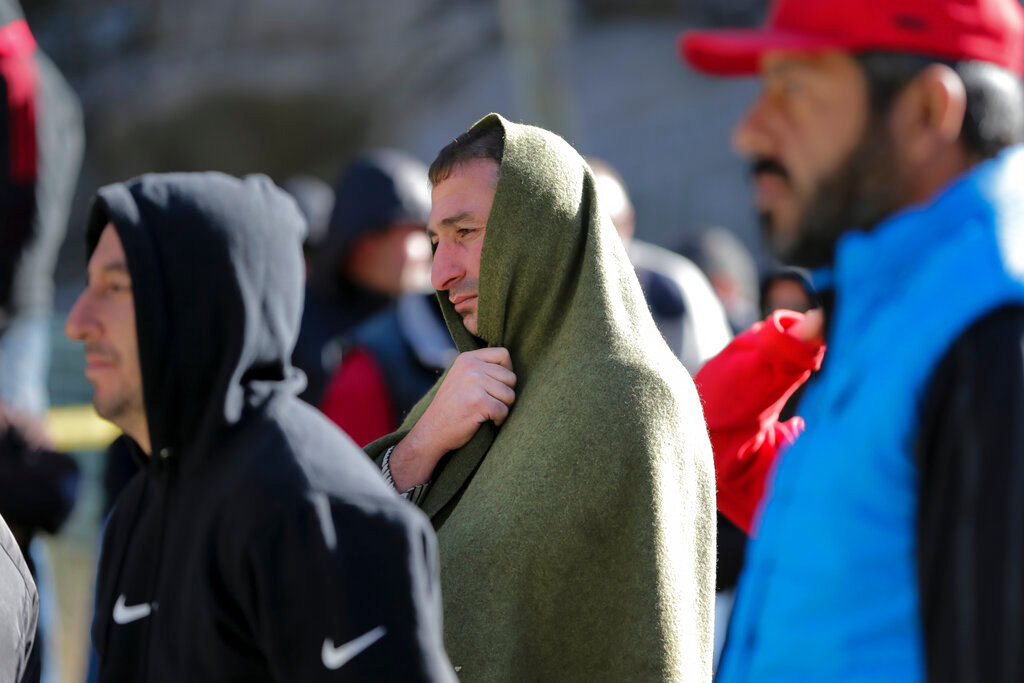 Russian men line up after crossing the border at Verkhny Lars between Georgia and Russia in Georgia, Tuesday, Sept. 27, 2022. (AP Photo/Zurab Tsertsvadze) 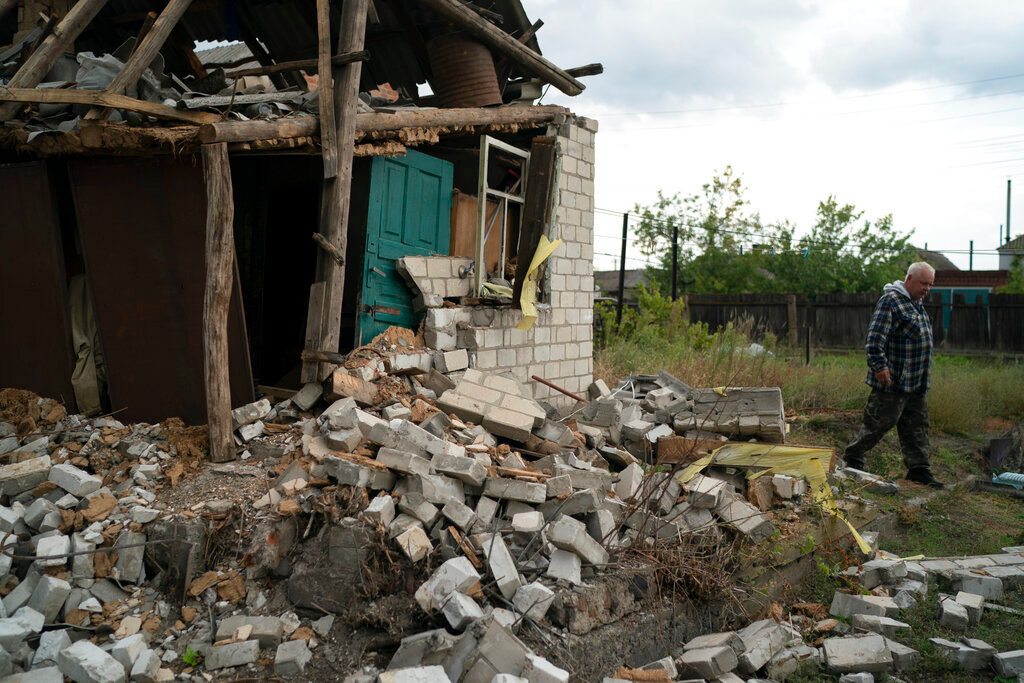 A man walks past his damaged house after a Russian attack days ago in Raihorodok, Ukraine, Monday, Sept. 26, 2022. (AP Photo/Leo Correa)
Previous Next
Posted Tuesday, September 27, 2022 9:35 am
By ADAM SCHRECK and JON GAMBRELL, Associated Press

KYIV, Ukraine (AP) — Referendums that are expected to serve as a pretext for Moscow to annex Russian-held regions of Ukraine reached their final day of voting Tuesday as the preordained outcome of the Kremlin-orchestrated votes heightened tension between Russia and the West.

The annexation of the four occupied regions in southern and eastern Ukraine, which could happen as soon as Friday, sets the stage for a dangerous new phase in the seven-month war in Ukraine.

Russia warned it could resort to deploying nuclear weapons to defend its own territory, including newly acquired lands in Ukraine.

After the balloting, “the situation will radically change from the legal viewpoint, from the point of view of international law, with all the corresponding consequences for the protection of those areas and ensuring their security,” Kremlin spokesman Dmitry Peskov said Tuesday.

Russian President Vladimir Putin has talked up Moscow's nuclear option since last week following a Ukrainian counteroffensive that led to recent battlefield setbacks and has the Kremlin's forces increasingly cornered.

The balloting that started Friday in the Kherson, Zaporizhzhia, Luhansk, and Donetsk regions and a call-up of Russian military reservists ordered by Putin are other strategies aimed at buttressing Moscow’s exposed position.

Dmitry Medvedev, the deputy head of the Russian Security Council chaired by Putin, spelled out the threat in the bluntest terms yet Tuesday.

“Let’s imagine that Russia is forced to use the most powerful weapon against the Ukrainian regime that has committed a large-scale act of aggression, which is dangerous for the very existence of our state,” Medvedev wrote on his messaging app channel. “I believe that NATO will steer clear from direct meddling in the conflict in that case.”

The United States has dismissed the Kremlin's nuclear talk as scare tactics.

Jake Sullivan, the U.S. national security adviser, responded to Putin's nuclear threats from last week. Sullivan told NBC on Sunday that Russia would pay a high, if unspecified, price if Moscow made good on threats to use nuclear weapons in the war in Ukraine.

The referendums ask residents whether they want the areas to become part of Russia. But the voting has been anything but free or fair.

Tens of thousands of residents had already fled the regions amid the war, and images shared by those who remained showed armed Russian troops going door-to-door to pressure Ukrainians into voting.

Mariupol Mayor Vadym Boychenko, who left the port city after the Russians finally seized it following a months-long siege, said only about 20% of the 100,000 estimated remaining residents cast ballots in the Donetsk referendum. Mariupol had a pre-war population of 541,000.

“A man toting an assault rifle comes to your home and asks you to vote, so what can people do?” Boychenko said during a news conference, explaining how people were coerced into voting.

Meanwhile, the mass call-up of Russians to active military duty has to some degree backfired on Putin.

It has triggered a massive exodus of men from the country, fueled protests in many regions across Russia, and sparked occasional acts of violence. On Monday, a gunman opened fire in an enlistment office in a Siberian city and gravely wounded the local chief military recruitment officer. The shooting came after scattered arson attacks on enlistment offices.

With Putin’s back against the wall amid Ukraine’s recent battlefield successes, Russian media speculated he might follow up on last week’s partial mobilization order by declaring martial law and shutting the nation’s borders for all men of fighting age.

Russian officials announced plans to set up a military recruitment office right on the border with Georgia, one of the main routes of the exodus.