Wayne Jenkins has made his mark as pastor, international missionary, artist, author 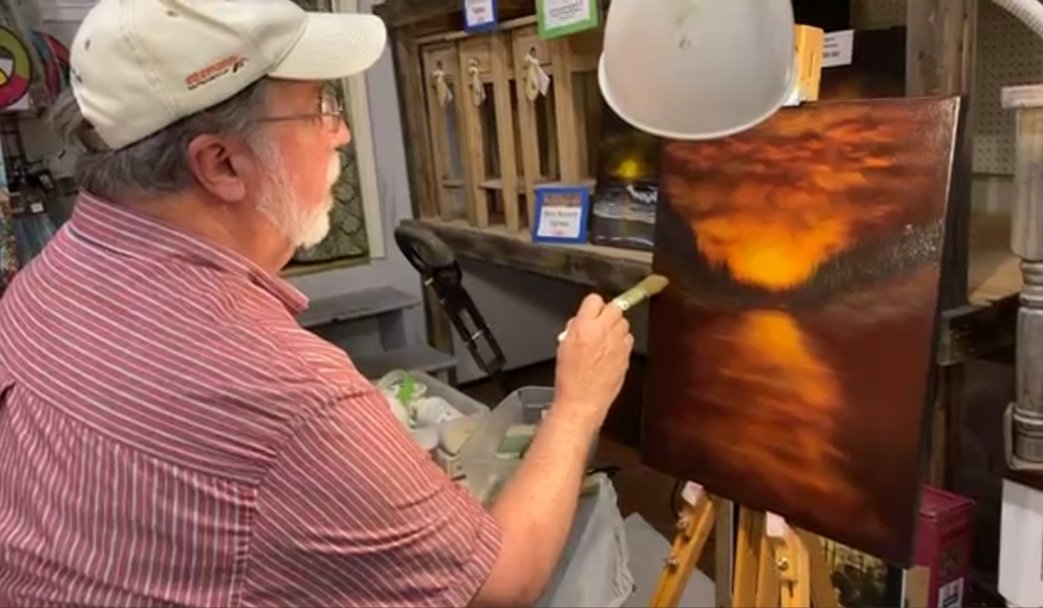 Wayne Jenkins works on a painting, one of many gifts for the associational missionary.

NEWNAN, Ga. – While Wayne Jenkins has spent his life serving the Lord, first in Georgia, then in Germany as a servant of Christ with the International Mission Board, and now as one of Georgia Baptists’ associational missionaries, he is also an extraordinarily gifted artist and author.

Those who have seen his paintings and read his books can attest to the fact that while Jenkins does not have the notoriety of Rembrandt, who painted “The Return of the Prodigal” or the fame of Lewis Carroll, who wrote “Alice in Wonderland”, he is a creative artisan and a talented writer.

After a five-year ministry as pastor of Flat Rock Baptist Church in Villa Rica, Wayne Jenkins, his wife, Pam, and their three children left Georgia to go to Germany as Southern Baptists’ first appointed missionaries in German-language work.

The Jenkins knew that God had called them to serve Him in an international setting, but Wayne often thinks of his appointment to Germany as rather surprising, even inexplicable considering the fact that he “failed” German in college.

However, after a year of studying the language at the Goethe Institute in Luneburg, Germany the family moved to Regensburg where he became the pastor of a 15-member church. The congregation grew steadily necessitating moves to larger facilities on three different occasions. More than 100 Germans were baptized in the twelve-year ministry of the Jenkins in Regensburg – thought by many to be a remarkable achievement in the German culture.

The International Mission Board then assigned the Jenkins the responsibility of establishing churches throughout the upper Palatinate region of Bavaria, a 90 square mile area of 1.1 million people. God continued to bless the ministry of Wayne and Pam Jenkins as they started Bible studies throughout the Bavarian Forest area.

While in Germany Wayne began the hobby of painting very detailed European scenes with an emulsion of acrylic polymer. Those paintings have been appraised as being very valuable. In 1996 the Jenkins were relocated from Regensburg to the county-seat town of Cham near the Czech Republic. The Lord blessed and the church that was started in the Jenkins living room experienced exponential growth. While in Cham the Jenkins established the East Bavarian Team of IMB Missionaries for the Upper Palatinate.

While in Cham, Wayne continued to hone his painting skills and rented and renovated a private art studio in in the center of the city which he called “Schau Mal Hi” or “look once this way” (writers translation). He developed his skill in oil painting and ultimately sold over 60 paintings. Jenkins explained, “All the money went to support our IMB missionary work in Malawi, Africa.

Jenkins continued, “I absolutely loved being able to engage people in this unique setting. The Germans respond to anything that has to do with art. I particularly like to paint landscapes: snow-capped mountains, lakes, waterfalls, seascapes, and rippling-streams, sometimes with a secluded cabin.

After 25 years as IMB missionaries the Jenkins returned to the USA on stateside assignment in April 2007. Wayne explained, “We were set to return after a year to begin new work in the Southern Tyrol area of Northern Italy among the German-speaking people groups there, but after speaking in many SBC churches and seeing the spiritual situation here, we felt God calling us to remain in the USA specifically in associational mission work.”

In February 2008 Jenkins was called to be the Associational Missionary for the Western Baptist Association (WBA) with the Missions Center located in Newnan. In his spare time, he continues to paint beautiful pastoral scenes.

Jenkins exclaimed, “Pam and I have our favorite paintings hanging on the walls in our home or at the Western Baptist Association office in Newnan. Most of the very detailed paintings of places in Europe are special. Usually, I set the price so high for my paintings that I get to keep them, but you never know. I have sold some paintings that I wish I had kept. However, all paintings are for sale.

“Recently, I have begun getting my paintings transferred digitally to canvas, so I can offer some of the more popular ones for sale as signed, limited editions. That way I can offer them at a reasonable price, like when I paint in public at the Newnan Art Walk (every autumn and spring at the Wildwood Trader across from the downtown Post Office) or on the two nights I paint ‘live’ in the Exhibit Hall at the Coweta County Fair.”

Jenkins’ paintings are complemented by his writing of novels for children and youth. His inspiration came from wanting his eleven grandchildren to have wholesome reading material. He explained, “In 2016 on the way home from our WBA Kids Summer Camp Rockridge in Franklin, one of my granddaughters, Katie, wanted me to make up a story. On the spot I concocted a story about a young girl, Katie’s age, who discovered a cave in the bank of a creek that eventually allowed her access into an old, deserted house.

Katie told another granddaughter, Caroline, about the story. One year later, sitting on our back porch, Caroline wanted me to recount the tale I had told Katie. I did my best to reconstruct the story and added some additional components to the fictional account about a young girl I called Ana Stillwell. In spinning the story, I emphasized the importance of making the choice of living one’s life by an incredible, life-changing intentional purpose. At one point Caroline interrupted me and said, ‘You need to write this story into a book.’”

As Jenkins explained the motivation for his first book, I recalled that  it was Charles Dodgson, who wrote under the pseudonym, Lewis Carroll who had a similar beginning for his writing career. He had told the daughters of Henry Liddell a phantastic, imaginary story as they rowed down the Thames River near Oxford, England; and it was 10-year-old Alice Liddell who pressed Carroll into writing the story into the book that became “Alice in Wonderland”.

“My painting and writing are a vital part of my ministry,” declared Jenkins. “The oil paintings generally feature some kind of water scene: an ocean, a lake, a pond, a river, a stream, a waterfall, or a dripping water trough. I sign my paintings with my initials: ‘JWJ’ and ‘Jo 7,38’ a reference to John 7:38: ‘He who believes in me, out of his innermost being will come rivers of living water.’  I use my paintings as an opportunity to give a non-threatening witness to the glorious, free salvation of my Lord Jesus Christ.

Jenkins continued, “After researching the current public book offerings for children and youth (ages 9-14), I was shocked at the almost complete lack of anything wholesome, fun, exciting, challenging, and Christian-oriented!  I began writing these books so that my grandchildren and other youth would have something wholesome and uplifting to read.

“My books are intentionally Christian-oriented, but, as someone has said, not "preachy." Ana Stilwell is a normal, 12-year-old girl. She loves Bible study in Sunday School and attending worship (First Baptist Church of Lewistowne). She prays. She witnesses. She tithes. She has an annoying younger brother. She also must deal with issues that most young people deal with, such as fitting into new situations and bullying in school. I wrote them so that parents can let their children read them with no reservations!

Jenkins concluded, “There are so many parents and grandparents who read them chapter by chapter at night to their kids. Several have said it needs to be made into a movie. I agree! We don't have that many good, fun, clean, exciting Christian movies for kids this age. Another reason I wrote these Ana Stilwell books, is so that pastors, children ministers, churches can have a book they can recommend to the parents of children and youth.”