I have always heard that it is windy at the top of the ladder. The greater one’s position and responsibility the more frequent and the more ferocious are the attacks.

President Donald J. Trump is at the top of the ladder as the leader of the Free World, and the criticisms and attacks are coming his way in rapid succession and in increasing intensity.

The bluster and bravado of his campaign obviously alienated some of the people within his own party and his intention to drain the swamp threatened both Democrats and Republicans. His proclivity for “tweeting” seems a bit sophomoric at times. There is a real sense in which he set himself up for criticism. But what does he deserve at this point in his presidency?

Kathy Griffin was recently photographed holding up what appeared to be President Donald Trump’s head, bloodied and detached from his body. It was a simulated beheading, but the message was clear.

When Griffin’s sponsors and producers responded to her action with terminated engagements and cancelled contracts she apologized, but she is an avowed “militant” atheist and several years ago when she won an Emmy for her reality program, “My Life on the D-List”, she held up her trophy, used an incredibly obscene expression to slur Jesus and declared, “This award is my God now.”

However, did President Trump deserve the targeted hostility of Griffin?

The President has threatened to halt White House press conferences, because of the “fake news” published by the mainstream media. The Los Angeles Times retaliated by running a four-part editorial on Mr. Trump called “Our Dishonest President” and referring to him as “immensely dangerous” and “radically wrongheaded” with a “reckless and heartless agenda”. 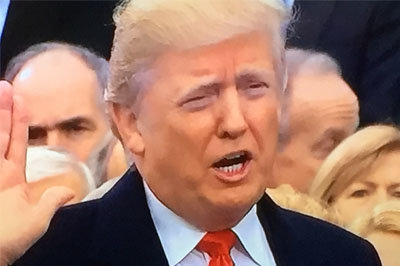 Donald J. Trump takes the oath of office in being sworn in as the 45th president of the United States.

The L. A. Times editorialized, “He is a man so unpredictable, so reckless, so petulant, so full of blind self-regard, so untethered to reality that it is impossible to know where his presidency will lead or how much damage he will do to our nation.”

Is that kind of editorializing fair? Is it what Donald Trump deserves?

Keith Olbermann, who should have remained a sportscaster, has railed on Trump for firing James Comey and stated, “At this hour, one of two things is already and irretrievably underway: either the end of Trump, or the end of the American democracy, because both cannot continue, because simply – you cannot fire the man who is investigating you.”

“Trump or the democracy?” Is that the kind of ultimatum we are facing? Does the President deserve that kind of criticism? What does he deserve?

Rosie O’Donnell has gone far beyond criticism of the president and suggested that he and Melania’s son, Barron, may have autism based on some of his behaviors. Others have attempted to defame the character of the first lady. Is that what the president deserves?

February 20 was President's Day, but thousands of protesters in cities around the country demonstrated against Mr. Trump, declaring, “Not my President's Day.” Is that what the president deserves?

There has hardly been a day since Donald Trump was inaugurated on January 20th that there has not be some riot or protest against his presidency. Furthermore, the cost of Secret Service and law enforcement protection has increased substantially, because of the target he seems to be wearing on his back.

Does President Trump deserve to be living in that kind of potentially threatening environment?

If I were qualified to be president I wouldn’t want the job. I am not sure I have the intestinal fortitude to serve a divided nation bent on anarchy.

The Apostle Paul wrote to Timothy and said, “I exhort therefore, that, first of all supplications, prayers, intercessions and giving of thanks, be made for all men. For kings, and for all that are in authority; that we may lead a quiet and peaceable life in all godliness and honesty.  For this is good and acceptable in the sight of God our Savior” (I Timothy 2: 1-3).