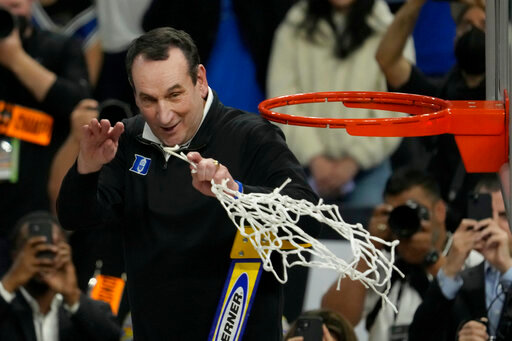 Duke head coach Mike Krzyzewski celebrates while cutting down the net after Duke defeated Arkansas in a college basketball game in the Elite 8 round of the NCAA men's tournament in San Francisco, Saturday, March 26, 2022. (AP Photo/Tony Avelar)
Posted Wednesday, March 30, 2022 8:47 am
By STEVE MEGARGEE

There’s no room for a surprise team at this Final Four.

Duke, North Carolina, Kansas and Villanova have combined for 17 national championships. Each of the schools has won at least three titles, making this the first Final Four in which each of the teams already had won multiple championships.

The closest thing to a Final Four party crasher is North Carolina, which was seeded eighth in the South Region but has won 10 of its last 11 games.

Those aren’t the only impressive numbers involving the four tradition-rich programs remaining in the NCAA Tournament. Here are a few things to know about each of the teams in the Final Four:

ON THE MARK: Mark Williams has blocked 16 shots in Duke’s first games, which matches the most by any Duke player in a single NCAA Tournament. Shane Battier had 16 in 2001 when Duke won the title. Williams also is shooting 80.6% from the floor, which puts him on pace to have the highest field-goal percentage in a single NCAA Tournament of any Duke player with at least 25 attempts. Williams’ accuracy has helped Duke shoot 53.8% in the tournament, the best field-goal percentage of anyone in the original 68-team field.

WATCH OUT FOR GRIFFIN: A.J. Griffin has been the barometer for Duke’s level of success against semifinal opponent North Carolina this season. He scored 27 points in Duke's 87-67 victory at North Carolina on Feb. 5 but had just five points in 34 minutes when the Blue Devils fell 94-81 to the Tar Heels at home a month later.

FAMILIAR FINISH: This is North Carolina’s NCAA-leading 21st appearance in the Final Four. The Tar Heels also lead all schools with 130 victories in NCAA Tournament games.

SELECT COMPANY: North Carolina coach Hubert Davis is one of only two people to play and coach in the Final Four with the same school. Davis was on the 1991 North Carolina team that lost an NCAA semifinal to Kansas. The only other person to make a Final Four as a player and coach at the same school was Dick Harp, who played (1940) and coached (1957) NCAA runner-up teams with Kansas. Davis also was an assistant coach on Roy Williams’ staff when North Carolina reached an NCAA final in 2016 and won the title in 2017.

MANEK VS. DEVILS: Brady Manek scored at least 20 points in each of North Carolina’s previous two meetings with Duke this season. He had 21 points when the Tar Heels lost to Duke at home. He had 20 points and 11 rebounds when North Carolina won at Duke. Manek has scored 86 points in this NCAA Tournament, the most of any player.

GETTING STINGY: The Jayhawks are allowing tournament foes to shoot just 34.1%. That’s the best NCAA Tournament field-goal percentage defense of any team in the original 68-team field.

MORE WINS THAN ANYONE: Kansas’ Midwest Region final triumph over Miami gave the Jayhawks 2,355 all-time victories. That enabled Kansas to take the Division I lead over Kentucky, a first-round loser that ended its season with 2,354 all-time wins.

UNDER 70: Kansas has held eight of its last nine opponents below 70 points. The Jayhawks are 24-0 this season when they allow fewer than 70 points. The only team to crack 70 points against Kansas during this tournament was Creighton, which lost 79-72 to the Jayhawks in the second round. Kansas’ semifinal opponent is Villanova, which has won nine straight but has reached the 70-point mark in just two of its last seven games.

NO MOORE: Justin Moore leads Villanova in minutes per game (34.4), ranks second on the team in scoring (14.8), 3-pointers (80) and assists per game (2.3) and ranks third in rebounds per game (4.8). Villanova will have to play the Final Four without Moore, who tore his right Achilles tendon in a 50-44 South Region final victory over Houston.

COLD BUT POISED: Villanova has shot 27.5% from 3-point range (14 of 51) over its last two games but still reached the Final Four. The Wildcats were 9 of 30 on 3-point attempts against Michigan and 5 of 21 against Houston. They’ve shot 30% or below from 3-point range in 13 games this season but have gone 9-4 in those contests.