When a good man stumbles 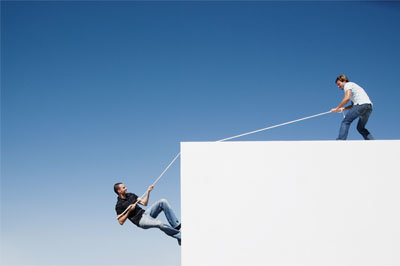 Derek Berry writes on the the imperative by Scripture to help others, especially if you don't want to. OJO/Getty
Posted Tuesday, March 28, 2017 12:00 am
Jeff Struecker

It’s frustrating when you break a tool in your workshop. Most of us have been working away diligently in the backyard only to have a tool break when you needed it most. The frustration is even greater when you never imagined the tools that you were using would break on you.

Deep in the back of our mind we all know that any tool can fail at any time. But often we use the same tool repeatedly and subconsciously start to believe that this tool will never let us down. Imagine that you’re pounding away with a hammer in your workshop. Only to have the handle of the hammer split while it’s still in your hands.

Most people don’t have several spare hammers because most of us don’t think we’re going to need to replace our hammer. You might have a different hammer for a different job but chances are you only have one hammer for one purpose. So, if the handle of that hammer splits, it will probably leave you frustrated, and since you don’t have a spare hammer in the workshop, it will probably also leave your project uncompleted. This is just a small, subtle example of what happens when a “good man” stumbles.

The term “good man” I’m using today doesn’t mean perfect. We all know there is no such thing as a perfect man. The only perfect man who ever lived was Jesus Christ. He, according to Hebrews 4:15, never stumbled in his faith nor ever committed a sin. I’m not trying to compare a good man with Jesus the “God-man.” That’s an unfair comparison.

The term good man that I’m using today refers to a guy who generally always delivers in a specific situation. Maybe it’s a baseball player who never drops the high fly ball. Maybe it’s the guy at work who never shows up late. Maybe it’s your neighbor who always mows his lawn on Saturday mornings – without fail.

If you wake up next Saturday morning and the neighbor isn’t mowing his lawn it’s going to make you wonder, what’s wrong with my neighbor? If your coworker shows up 30 minutes late to work it’s probably going to get your attention. When that ballplayer drops the easy fly ball everybody in the crowd moans. Any ballplayer can miss the fly ball but when this guy misses its highly unusual.

We all need help getting back up

The obvious answer is to go help him up. When your coworker is running 30 minutes late to work stop him at break and ask him if anything is wrong, ask them if there is anything you can do for him? It shows your coworker that you care. Rather than booing the baseball player who dropped the easy flyball, why don’t you shout out, “You’ll get the next one, I believe in you!” When your neighbor didn’t mow his lawn on Saturday morning, why don’t you find out if there’s anything you can do for him? Sunday afternoon, after you get home from church go knock on his door and ask him if you can mow the lawn for him.

When one stumbles it sets us all back

When a good man stumbles just a little bit it hurts us all because we all believe in the good man. We all want to see the good man get back up, brush himself off, and restore what he lost when he stumbled.

There’s a brief example of this in Luke 23:26. Jesus has been sentenced to death. Crucifixion is the method that the Roman government will use to execute Jesus. This was a notoriously painful process. In fact, the word excruciating that we use in the English language barely describes the pain associated with crucifixion. If you were to read between the lines in this verse, Jesus had been brutally beaten. The good man who did nothing wrong was sentenced to die for our mistakes (Isaiah 53:5). We don’t have an accurate record of how long or how bad was the beating that Jesus endured.

After the beating, Jesus was forced to carry his own means of execution up a hill to the outskirts of town. This cross would have been large, heavy, rough-cut wood. Somewhere along this route Jesus stumbled. His physical abilities gave out. He no longer had the strength to carry the wooden cross to the top of Mount Calvary.

The Roman executioners were not about to give him any mercy. They weren’t willing to slow down the pace of Jesus’ execution. They grabbed a man in the crowd by the name of Simon and forced him to carry Jesus’ cross.

Imagine that you’re one of Jesus’ followers. You have believed him to be the Son of God. You have staked your life on the claims that he’s making as God’s anointed. Maybe you and I can get a small glimpse at the shock Jesus’s disciples would have experienced when they watched their Savior stumble under the weight of that cross. When they saw this good man stumble it must have been devastating!

Notice, none of his disciples ran over to help Jesus carry that cross. Those guys are terrified for their own life. Those guys ran away instead of running to help their Savior. That’s why the Roman guards had to force an unknown man to carry Jesus’s cross.

When you see a good man stumble rush over to help him up. When you stumble be willing to lean on somebody to help you get back up and get on your feet. It’s part of the common human condition – we all have stumbled in the past, and will stumble again in the future. We all need somebody like Simon to be there when we can’t bear the weight anymore.