'Who's watching you?' asks Braves legend

CARTERSVILLE — For the attention he draws and his place in Atlanta Braves history, it's hard to believe Sid Bream was with the team only three years out of a twelve-year career. His best came in 1992, a season highlighted by the most beloved 180-foot scramble in franchise history.

It happened 24 Octobers ago, but a video of Sid's Slide was still able to garner cheers at Cartersville First Baptist Church's Sportsmen's Dinner April 16 and numerous "where-I-was-when-I-saw-it" stories. It was a brief moment from a player who really wasn't in Atlanta all that long, yet lives on.

Bream's message focused on what can be accomplished in a short amount of time, namely, the influence men can have on their families. "I can't thank my dad enough for getting me out in the woods," he said, adding the importance of that time together as a young boy and watching his own father show integrity and responsibility when it came not only to hunting, but every aspect of life.

"Have you been teaching your son or daughter what's right and what's wrong?" he asked. He went on to tell a story he'd heard about a dog horribly injured in a lawnmower accident, resulting in the removal of the lower part of her back legs. She was pregnant at the time and had her puppies. The mother dog had to learn to get along by dragging herself around, a practice picked up by her puppies although they had perfectly-formed and functional legs.

"What your kids see you do," he emphasized, "they'll do."

A place to speak

Prior to Bream's message attendees of the event sponsored by the church's men's ministry – including men of all ages as well as sons and daughters – had access to competitions for casting as well as shooting bows and BB guns. A substantial crowd gathered around the barbecue demonstration table, which included a pot of turtle stew, before going inside for their own catered barbecue meal and to see hunting trophies on display.

Bream was a novice as a motivational speaker before his play in the NLCS Game 7 against his former team, the Pittsburg Pirates (he and his family still live in Pittsburg), but his notoriety increased substantially afterwards. It elevated him in baseball, sure, but more importantly in another area. 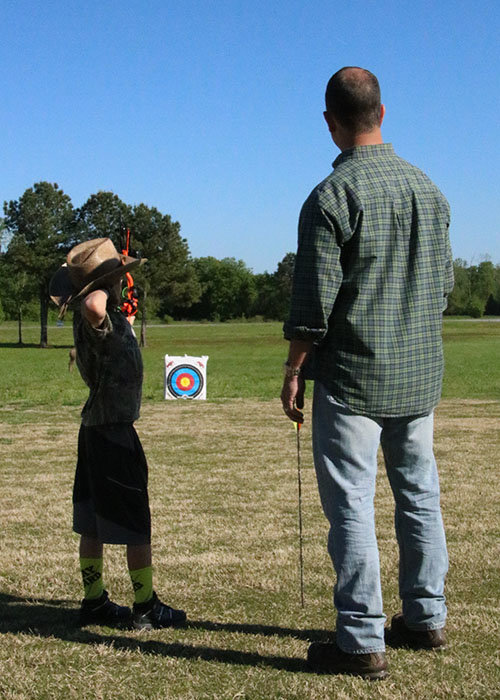 Seven-year-old Zeke Helton aims his bow under the eye of his dad, Shep. SCOTT BARKLEY/Index

"The '92 play gave me a platform to go out and speak," he said. "It wasn't really my desire to do that, but God kept putting the opportunities in front of me. That play continues to hold in people's minds and gives me the chance to tell people about Christ."

In introducing Bream, CFBC member Adam McCown told about going to a Braves game on Sid Bream Bobblehead Night. Afterwards, McCown and his group went to The Varsity.

"We get there and Sid is there as well," he said. "Of course, there's this really long line of people wanting him to sign their bobbleheads of him. We sat over to the side and I just watched him sign for 30 minutes, 45 minutes, the whole time talking to people, engaging them, asking about them. All the time his food is getting cold and he keeps signing and talking.

"I could tell he was tired but he didn't stop, said McCown, a fellow Liberty University alum with Bream and two of his children (two others are currently students there). "That told me a lot about his integrity."

Bream spoke about being a kid obsessed with hunting, but also baseball. Those two didn't overtake another family priority, though. It was something he had to grow to understand.

"I was in church on Sunday mornings, Sunday evenings, and Wednesday nights and there would be times I was so ticked off about being in church all the time," he said before turning his attention to the younger part of the crowd. "But let me tell you something: Be glad you have a mom and a dad who love you enough to bring you to church. Be thankful they care enough for you to do that. That's where I learned about a Savior who loved me enough to come and die for me.

"I don't know where you're at. I love playing baseball. I love hunting. I love my wife. I love my family. But I can say this with all truth: there's nothing I love more than my Savior Jesus Christ."

"One of these days we're going to stand before Jesus and give an account," he told attendees. "I hear people say 'I'm a good person. I put money in the offering plate. I teach Sunday School. ... I do a lot of good stuff.' 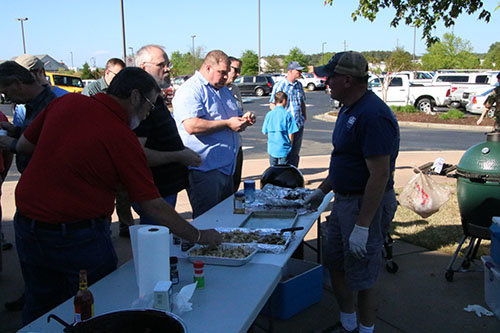 Attendees at the sportsmen's dinner hosted by the men's ministry of Cartersville First Baptist Church try out some barbecue prepared by member Scott Lowery, right, as well as a pot of turtle stew, bottom left, made by member Galen McDaniel. SCOTT BARKLEY/Index

"That's not the point," he stressed in quoting Ephesians 2:8, "'For it is by grace through faith you have been saved, lest any man should boast.' There's nothing any man can do on his own to get to heaven."

Bream acknowledged rough spots in his own testimony that, early on, threatened his 33-year marriage. At one point he even flatly told his wife, Michele, "I wish I'd never married you.

"I've done things made her walk out on me so quick," he added, "but we've made Christ the center of our relationship. Knowing Jesus is in my heart, and in the hearts of my family, that's the greatest peace I could ever have. I pray you have the same thing tonight and, if you don't, I pray you get that right."

Sports are a big draw for families today, he acknowledged in a conversation before going onstage, and are good when kept in the proper context. "I don't believe in paying $6,000 for your kids to play baseball, but I do believe in getting them good instruction and learning good mechanics," he said. "It's important to let your child determine how far they want to take it; don't force it on them.

"When it comes down to it, though, it doesn't matter if he's a professional baseball player, doctor, or lawyer. The biggest priority is for them to have a growing relationship with Jesus. If you stick with that, God will take care of everything else."

Later on, Bream sounded like someone personally familiar with how a moment drawn from a short amount of time can echo with people ten or 20 years later.

"You have a tremendous responsibility," Bream said to the fathers in the audience. "I ask you once again, what are you going to do about it?"