Why Delmar is a more famous name than Epstein 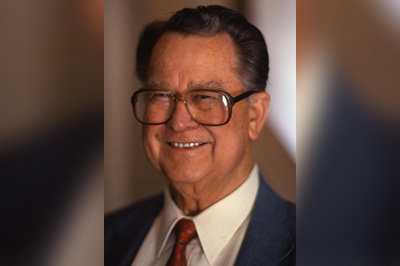 I was in an urgent care facility on Saturday getting my son checked for strep when my phone dinged. Jeffrey Epstein had committed suicide in a New York jail. I wasn’t surprised.

Before this year I wasn’t very familiar with Epstein, a billionaire financier under arrest for basically being one of the world’s largest sex traffickers. I won’t go into details on his case that stretches back to at least 2005, but here’s some background. In a very polarized era, people had lined up as to Epstein's guilt and subsequent longing for his victims to see justice. Today, that's saying something.

Christians know Epstein didn't escape justice with his final earthly act. But that's not how an apoplectic world sees it. Furthermore, the hopes to prosecute those complicit in, or at least knowledgeable of, his activities may have died with him. Questions remain and other lawsuits will follow, but many dark secrets may never see the light.

This morning, my son and I were reading through Psalm 1. In it, there are two types of people. One avoids influence by the wicked. He or she does not mingle with "scoffers" (ESV) but instead "delights in the law of the Lord, and on his law he meditates day and night."

The unrighteous, it continues in verse 4, are described as "chaff that the wind drives away." There's an appearance of success to their lives. For all their accomplishments in this life, though, it means nothing in the next one.

Jeffrey Epstein enjoyed relationships with many famous people. He traveled around the world. He had a private island. By every worldly standard he was successful. And yet, he was a sex trafficker who ended up dead in a jail cell.

While many enjoy a higher profile or name recognition, I'm convinced the most crucial people to a group, community, or organization toil in relative obscurity. They do the jobs that need to be carried out. Their place is often in the background. As far as the world is concerned, they barely existed.

And more often than not, those saints are unaware in this life of the impact they bring.

Before moving to Georgia, I served as a NAMB US-2 missionary in Cheyenne, Wyoming. It was a great experience living in the Cowboy State. While there, I learned about Benny Delmar.

Mr. Delmar was a legend among Wyoming Southern Baptists and basically throughout that part of the country. He established Southern Baptist work in Wyoming, Montana, and North Dakota in the early 1950s, helped by a $200 monthly paycheck from NAMB. Delmar would travel as much as 70,000 miles a year and preach in as many as five locations on a Sunday.

After he died in 2007, Baptist Press noted his contributions. The number of people who came to a relationship with Christ through his work is literally impossible to know this side of Heaven.

“He would drive night and day to get where he needed to go,” retired Wyoming Southern Baptist Executive Director John Thomason said in that article. “I remember his telling me about a town where he went to start a church. A pastor there of another denomination was violently opposed to a Southern Baptist church starting, and told Benny so.... Benny told him, ‘When the Holy Spirit tells me to stop starting churches, that’s when I’ll stop.’”

Former Index Managing Editor Joe Westbury recounted his own observations in meeting Delmar. The circumstances were far from glamorous. They consisted of a hard-freeze Wyoming morning with only a handful of people in a small church. By the standards of many – including those in church circles – it hardly screamed “success.”

Even though, Westbury wrote, “I was sitting in the midst of greatness that I still didn’t understand. Here was a man who defied all the stereotypes of greatness I had come to accept. He was not bigger than life, an eloquent preacher, or a great statesman. He didn’t even have a television ministry. But he loved Jesus, and he loved telling girls and boys, as well as hardened ranchers and oil field workers, about Him.”

The ‘last of the suitcase missionaries,” as Westbury described him, was credited with starting more than 140 churches throughout the upper Midwest. Yes, 140.

Life brings choices, and in those choices we see who (or what) is important to us. I know there are other Benny Delmars around the world, because that’s how the Church grows. They do the work to which Christ has called them. And the fact they answered the call is the only definition of success that matters.