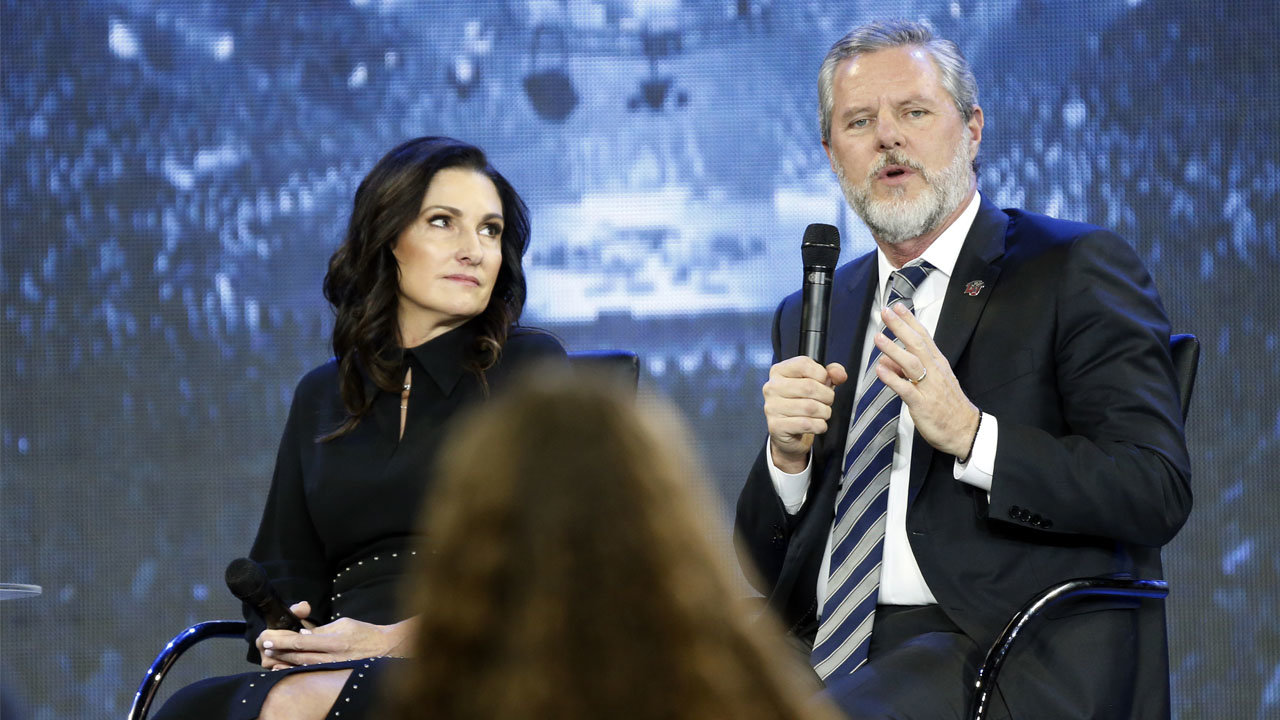 Jerry Falwell Jr., right, answers a student’s question, along with his wife, Becky, during a town hall on the opioid crisis at a convocation at Liberty University in Lynchburg, Va., on Nov. 28, 2018. STEVE HELBER/AP
Posted Monday, August 17, 2020 3:36 pm
The Christian Index

Jerry Falwell Jr., right, answers a student’s question, along with his wife, Becky, during a town hall on the opioid crisis at a convocation at Liberty University in Lynchburg, Va., on Nov. 28, 2018. STEVE HELBER/AP

(RNS) — It may not be unusual for the head of one of the country's largest evangelical universities to follow students or student groups on social media.

Or to follow or share content by conservative political pundits. Especially if the school's leader has been as outspoken about politics as Liberty University President Jerry Falwell Jr. has been.

But tweeting an image of a face mask featuring a politician in blackface proved problematic for Falwell.

And an Instagram photo of Falwell with his arm around a woman who is not his wife – their pants unzipped and midriffs bared – led to Falwell taking an indefinite leave of absence from his roles as president and chancellor of Liberty.

For leaders of religious institutions, social media can be another way to share their public messages and a peek into their private lives. But it can also backfire.

"There's a certain kind of integrity that the president of an evangelical university has to have, and he's crossed that line of integrity multiple times," Messiah College history professor John Fea said of Falwell.

Now, some of the images Falwell has "liked" on Instagram are raising eyebrows.

Religion News Service has verified that Falwell has liked a handful of images posted on the social media platform that show young women in swimsuits in the past month.

One is a photo of model Stefanie Gurzanski, who has appeared on the covers of Cosmopolitan Mexico and Maxim Mexico, posed across the back of a couch in a black one-piece suit and leopard-print high-heeled boots.

Another is an ambassador for conservative student movement Turning Point USA who pairs photos of herself in swimsuits with political memes and patriotic or inspirational Christian captions.

While young women posting swimsuit selfies is an innocent Instagram activity, liking them is "certainly unbecoming for the president of, as he calls it, the largest Christian college in the United States," Fea said.

That's particularly true at a place like Liberty, whose founder, Jerry Falwell Sr., was head of the Moral Majority and whose rules stress values like sexual purity and abstaining from alcohol.

"Any kind of evangelical Christian would, I think, have an issue with that. It would raise eyebrows," Fea said.

The historian, who had not viewed the Instagram photos in question, said he can't imagine another evangelical leader liking photos of women in swimsuits on social media. He pointed to the so-called Billy Graham rule, named for the famed evangelist who wouldn't even be alone in a room with a woman who was not his wife.

Falwell, who did not respond to a request for comment, has been no stranger to controversy over the past few years.

He suggested students carry guns in the aftermath of the San Bernardino shootings and defended President Trump's comments about assaulting women in the infamous Access Hollywood tape. 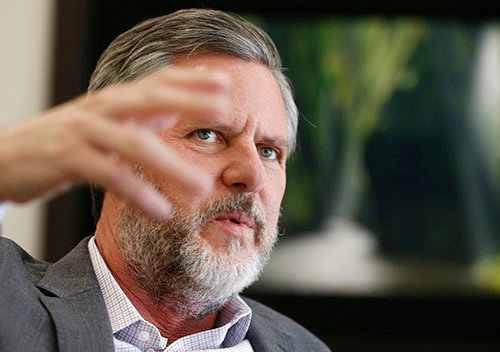 Liberty University president Jerry Falwell Jr., gestures during an interview in his offices at the school in Lynchburg, Va., on Nov. 16, 2016. STEVE HELBER/AP

Falwell also faced questions about his investment in a Miami youth hostel. Photos emerged of Falwell and his family at a Florida nightclub. Former Trump attorney Michael Cohen claimed he helped prevent the release of some "personal photos" belonging to Falwell – described as "photos between husband and wife."

But, Fea noted in a recent blog post, it's Falwell's more recent behavior on social media that has come with consequences.

For a certain generation, the historian said, "a mark of a Christian in public life was that you didn't drink and you didn't act inappropriately with women in public."

"It all kind of comes down to sex and alcohol," he said.

It's not unusual to hold leaders of Christian or other religious institutions to a higher standard, according to Heidi Campbell, a communications professor at Texas A&M who focuses on the intersection of religion and the internet. And Falwell isn't the first to fall short of that.

Campbell pointed to the examples of pastors Jim Bakker and Jimmy Swaggart, who were undone by scandal in the '80s and '90s.

As Campbell put it, "there's nothing private in a digital world."

What happens on social media isn't disconnected from the rest of one's life, and Christian leaders need to be mindful of their activity online as well as off, said Dan Darling, senior vice president for communications at National Religious Broadcasters.

"I think sometimes leaders forget that when they're on social media, they are in public," said Darling, author of "A Way with Words: Using Our Online Conversations for Good."

Social media can be a great tool for leaders to share a glimpse into their lives and work – things that "humanize" them, he said.

Falwell does this, too, sharing photos and videos of family vacations, gushing over meeting musician Jerry Lee Lewis, attempting TikTok dances during quarantine, and asking followers what his wife should name her new puppy.

But Christian leaders should think through what they post, knowing what they do "in moderation, they give permission to their followers to do in excess," said Darling, who did not speak about Falwell specifically.

They should be careful not to join a "digital mob" or share misinformation or create an echo chamber, where they hear only from other people on social media who agree with them.

And, yes, they should think about what they "like" on social media, too.

"I do think the thought needs to go through our minds, 'If I tweet this, if I like this, if I retweet this, you know, what are people going to understand from me doing this?'" Darling said.