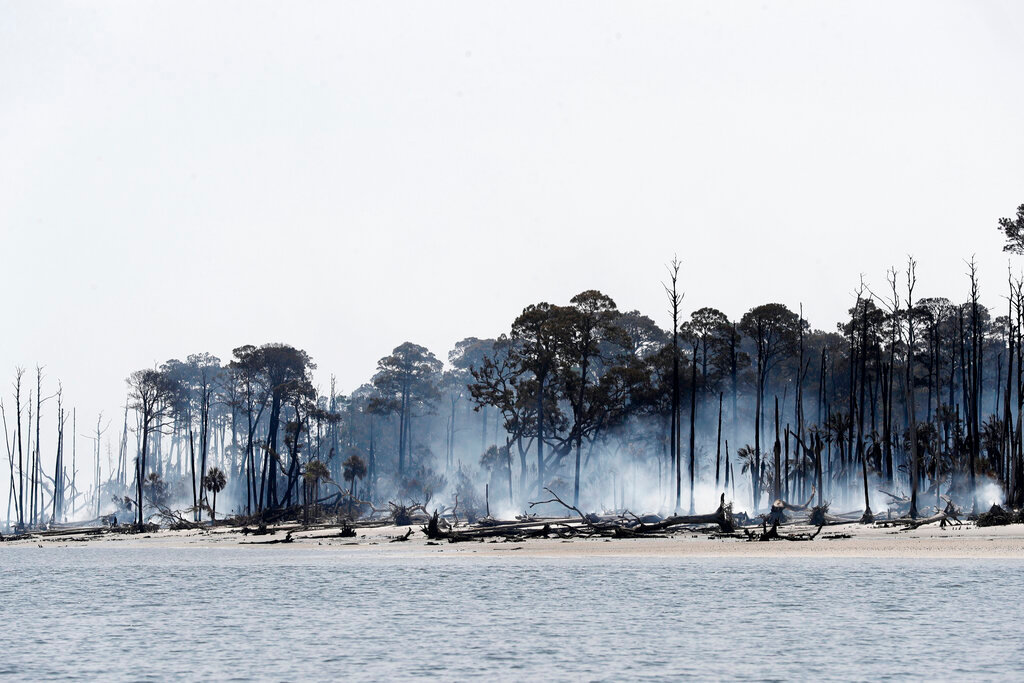 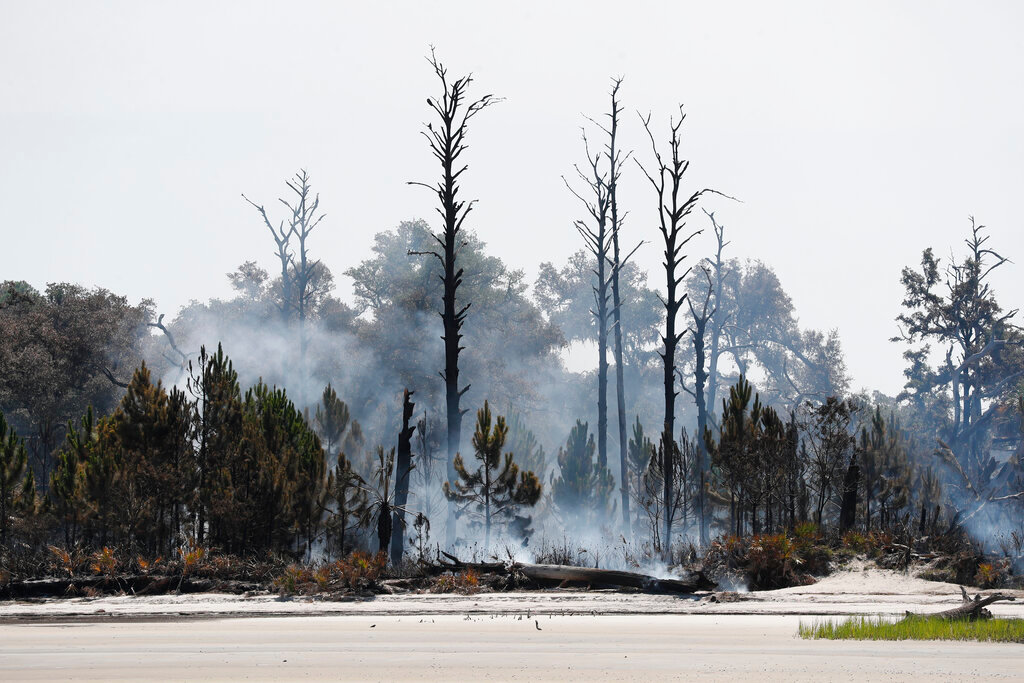 Smoke rises from the burned landscape at the north end of St. Catherine's Island on Wednesday, June 22, 2022. (Richard Burkhart/Savannah Morning News via AP) 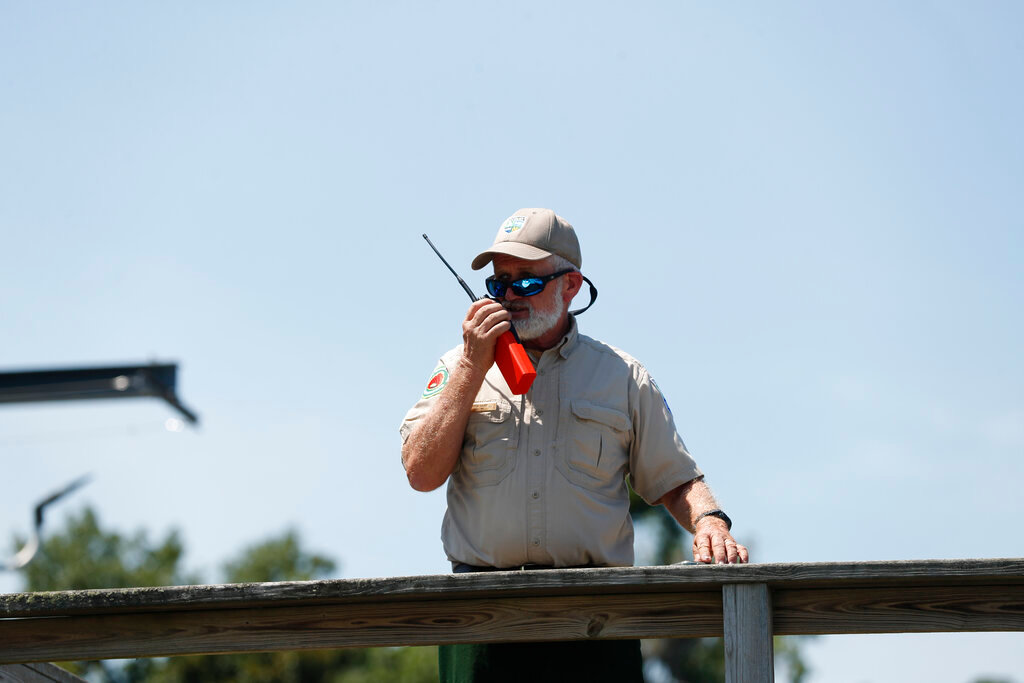 ST. CATHERINES ISLAND, Ga. (AP) — Wildfires sparked by lightning have scorched hundreds of acres on this unspoiled island off the Georgia coast, where crews are battling to protect plantation ruins, the remnants of a 16th century Spanish mission and archaeological sites that have yielded human artifacts thousands of years old.

St. Catherines Island has long been prized as an ecological and historic coastal treasure. Giant sea turtles nest on its beaches and ring-tailed lemurs, brought to the island decades ago, live in its dense forest. Slave quarters made from oyster-shell tabby survive on the island, about 40 miles south of Savannah, as does the home of a signer of the Declaration of Independence.

Protected for decades under ownership of a private foundation, St. Catherines Island has seen roughly 15% of its land area burn since a lightning storm sparked fires June 11. Severe drought left the island tinder-dry, allowing flames to rapidly spread. Columns of black smoke have been visible from the mainland, and raging flames reaching the treetops have at times burned near the beach.

“We have an untouched history, so we go above and beyond to try to protect that," Michael Halderson, the island's manager and only fulltime resident, told reporters Wednesday during a boat tour of the island's perimeter, where smoldering fire formed thick smoke among blackened trees.

The island fires are among more than 30,000 that have burned roughly 4,600 square miles nationwide during one of the worst starts the U.S. has seen to its wildfire season.

Halderson and his small staff of seven worked nonstop for days trying to contain the flames until they realized four separate fires were burning across the island's 6,700 acres.

Help arrived last week from the Georgia Forestry Commission, which mobilized about 15 wildland firefighters with bulldozers for plowing fire breaks as well as planes and a helicopter equipped to dump water on the flames. Another 25 fire team members were expected to arrive Thursday.

Crews haven't attacked the fires with trench-digging plows as aggressively as they normally would, given the island's history as a trove of historical treasures.

Over the decades, archaeologists have located the site where Catholic missionaries from Spain established a church and settlement on the island in the 1570s. Others have found evidence of humans living here 4,500 years ago. In total, the island has yielded well over 1 million artifacts.

Concerned that heavy plows could destroy undiscovered buried treasures, firefighters in some areas have taken a slower approach using bulldozers to scrape just a few inches from the ground — enough to clear grasses and vegetation so they won't fuel the spread of approaching fire.

Areas of the island considered more sensitive are being doused with water from the air, said Byron Haire, a spokesman for the forestry commission team.

“We want to get this fire stopped, but we just have to slow down," Haire said, adding that crews are trying “to keep a light hand on the land vs. the heavy hand of a machine that digs up a lot of dirt.”

Haire estimated the fires so far have burned up to 1,000 acres. Low humidity and unpredictable winds have made fighting the blazes more difficult.

Still, crews have managed to keep the flames out of the island's compound that includes lodging for visiting researchers and a radio tower that's vital for communications. Also protected in that area is the former home of Button Gwinnett, a signer of the Declaration of Independence who bought the island in 1766 and lived there until he died in 1777 after being mortally wounded in a duel.

Flames crept close to the tabby plantation ruins on the island's south end until a helicopter snuffed them with water dumped from a giant bucket, Halderson said. He said fire burned through the Spanish mission site, where planted palm trees outline the footprint of the church that stood there centuries ago, but appeared to do little damage.

As for the island's wildlife, both Halderson and Haire noted that animals typically are adept at avoiding fire. In some areas scorched when the fire first started, new plants have already begun to sprout.

Still, Halderson said doesn't expect the fires to be extinguished any time soon.

“This will continue until we get significant rain,” Halderson said. “It could take weeks. It could be months.”