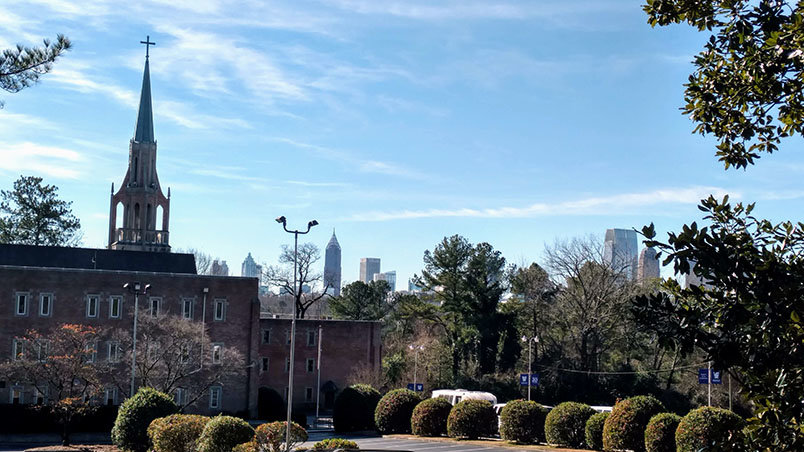 The Atlanta skyline serves as the backdrop for the architectural gem – Morningside Baptist Church. MORNINGSIDE/Special

ATLANTA — Morningside Baptist Church, like thousands of others in America, has been in decline for decades. The church has a rich history and reached its zenith in the 1950s during the pastorate of James P. Wesberry. Early in the decade the church moved into a new worship center – an architectural gem – with a seating capacity of 1,000.

In the 1960s, the construction of I-75 and I-85 created a dramatic change in the demographics of the Morningside community. Many families living inside the perimeter of Atlanta began to move to the suburbs. Consequently, the growth of the church not only ended, but a spiraling decline ensued. In recent years the future of the church has even been in question.

The leadership of the church could have chosen to disband, guide the church through the stages of grief, sell the property to a developer, and donate the proceeds to missions. But there were a faithful few that held out hope that the church could flourish once again.

Today, writer Gina Hannah describes the Morningside community as having “beautiful, tree-lined streets with restored Craftsman, Four-Squared and Tudor-styles homes.” Nearby, there are excellent public schools, popular restaurants, acres of natural green space, a walking trail and even a suspension bridge over South Fork Peachtree Creek. 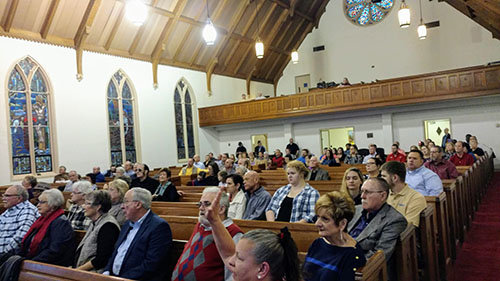 Hundreds of people came to Morningside Baptist Church for the concert by the choir of First Baptist Villa Rica and the message by FBVR Pastor Kevin Williams on a Sunday evening. MORNINGSIDE/Special

After filling the Morningside pulpit as a supply preacher in the spring of 2018, Rev. Joe Sims, 58, was called to be the interim pastor of the Atlanta church on August 5, 2018. Sims’ vocational experience has included success in the business world and in poultry and cattle farming. After responding to God’s call to preach the Gospel in 2012, Sims sold his large poultry operation to pursue an education at New Orleans Baptist Theological Seminary.

Sims is a winsome and affable Christian gentleman, who has been involved in the ministry of First Baptist Church of Bremen for years and served as Pastor Herman Parker’s intern since 2015. His heart’s desire is to “bring glory to God by leading believers to love God with all their hearts, love their neighbors unconditionally, and make disciples through sharing the Gospel.”

On Sim’s first Sunday as interim pastor at Morningside, the church had 11 people present for the service. He recalled, “The mood was somber. The services lacked enthusiasm. There was no sense of urgency among those who were there. The church has lacked leadership and vision for some time. Through the years there have been those who wanted to sign Morningside Baptist Church’s death certificate.” 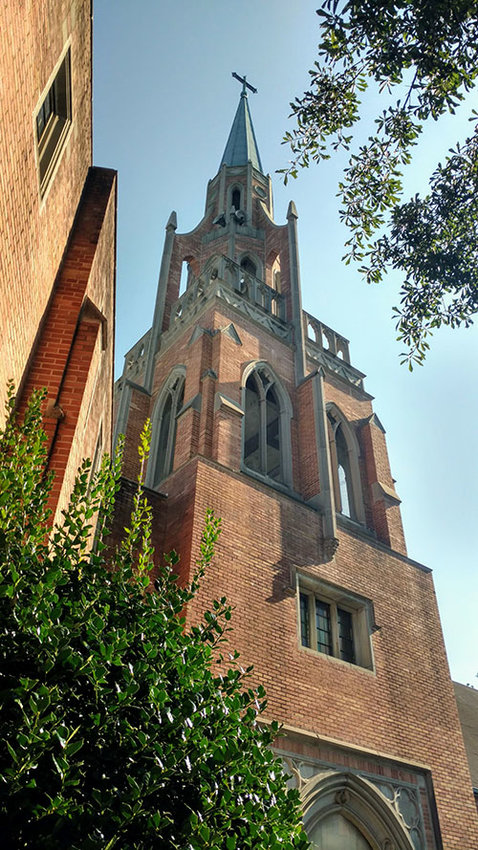 The towering spire of Morningside Baptist Church in Atlanta stretches into the sky. MORNINGSIDE/Special

Nurturing a hope for the future

Heritage Preparatory School, the only covenant, classical, and Christian Pre-K through 8th grade school inside the perimeter of Atlanta, leases the church’s facilities and the income derived from the school has kept the church solvent in recent years. Sims contends that while the funds from the school have permitted the church to operate in the black and make renovations, that it has created a false kind of security or a comfort zone that may have diminished the sense of urgency.

“Having a positive cash flow has created an environment whereby the church is operated more like a business than a church – doing church rather than being the church,” he explained.

Churches that have experienced significant decline tend to focus more on a love for the past than nurturing a hope for the future. They spend too much time looking in the mirror than out the window. An inward focus, a fear of taking risks, measuring numerical growth rather than spiritual growth as the greatest sign of success, and conflict can keep churches submerged in the abyss of despair and decline.

However, it may be that a new day is dawning at Morningside. In the last six months there has been a steady flow of visitors. The pastor is planning to baptize two new believers on Easter Sunday. God’s Word is beginning to grip the hearts of those who come to worship. A few of the people are becoming more aware of the need to identify those who are without Christ and share the Gospel. The attendance has grown, and progress is becoming obvious.

Sims stated, “The pastor of First Baptist Church Villa Rica, Kevin Williams, offered to bring his church’s choir to Morningside for a Sunday evening concert and to preach for us. Everyone was excited at first, but then we began to realize how much work would be required to make the event a success. 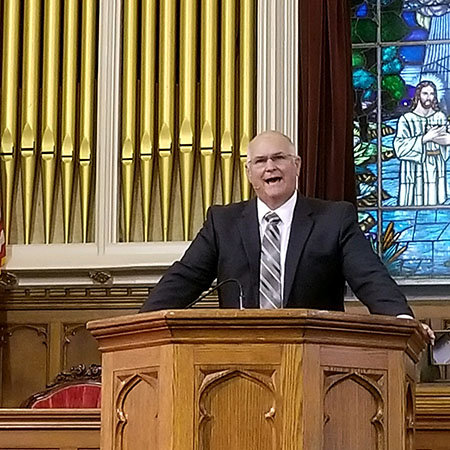 “We mailed out 5,000 invitations to the community. I urged the congregation to meet me at the church at nine o’clock on the Saturday morning before the event to pass out flyers in our neighborhood, but only one person showed up for the outreach effort.

“However, the deacons agreed to pay for a meal for the choir prior to the service on Sunday evening. Someone wanted to go all out and decorate the fellowship hall with table cloths and flowers on every table.”

“The estimated attendance for the service that evening was 400 people. One lady trusted Christ as her Savior that night. Some who complained about the event taking too much work truly had a worship experience that night and other MBC members were truly transformed.

“That night the chairman of the deacons came to me and said, “Pastor, that was pretty amazing and whatever you do here at Morningside from now on has my approval. I have never seen that many people here before. The music was awesome, and the preaching was great.”

Craig Bohiken, who gives Pastor Sims high marks for his leadership, stated, “Joe Sims is the most loving pastor and Morningside is the most loving church that I have ever been part of in my life. Pastor Sims is a man of great love, integrity, and character. Since he has become our shepherd the church is more energized, loving and caring.”

The music at Morningside is particularly meaningful. Charity Hitchcock, one of the church’s vocalists, commented, “Singing with the worship team Sunday mornings feels like singing in heaven – like a precursor of things to come.” 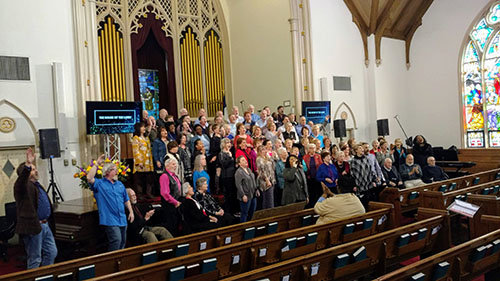 Dr. Berkie Gordon, an emergency room physician, addressed what he called the “unfolding replant and rebirth at Morningside Baptist Church.”

“My family and I have been members at MBC since 1994,” he said. “A consistent characteristic of the church fellowship has been Christian warmth and a deep love for all our neighbors. As we lean on Christ to revive us again at MBC, we pray, fast, and have begun to implement His Great Commission as stated in Matthew 28: 19-20.”

The church has already voted to provide a salaried position for a children’s director, which will hopefully attract more young families to the church. Morningside could surely profit from churches in the Atlanta area that would be willing to send some of its members for six months to help with the revitalization of the church so they could attain the stability that would ensure the church’s future.

The pastor concluded, “I believe Morningside’s best years are ahead of it. Everywhere you go in the surrounding communities, houses are being torn down and new ones are being built. Many houses are being renovated. Big, huge apartment complexes are being erected all over the Morningside and Midtown area. Atlanta has become the place to be and to live for many young adults. Surely, within a five-mile circumference there are close to 500,000 residents. We must fulfill the Great Commission and we need to start here.”

Will Morningside become a comeback church? Pastor Joe Sims thinks so and I want to agree with him.