Will Saturday, September 23, be the last day for this world? 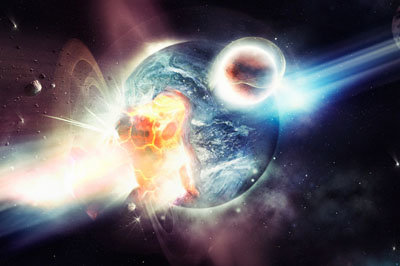 David Meade, a Christian numerologist, has retreated to his libraries, his supposed knowledge of the Bible, his powerful telescopes, his knowledge of meteorology, astronomy, and who knows what else, and concluded that this coming Saturday we can bid farewell to “The Late Great Planet Earth.”

Meade is predicting one final cataclysmic event that will blow the world to smithereens. He has reasoned that the recent solar eclipse, the devastation of Hurricanes Harvey and Irma, and the subsequent flooding are a fulfillment of the Lord’s prophecy in Luke 21:25-26 where He speaks of “signs in the sun, and in the moon,” and “the distress of nations, with perplexity; the sea and the waves roaring.”

The grand finale, according to conspiracy theorist Meade, will be the collision of Earth with the mysterious planet Nibiru, also called Planet X, on Saturday, Sept. 23. The collision will result in explosions, earthquakes, tsunamis, and volcanic eruptions ushering in the conclusion of life on this planet.

A documentary was shown on television Sept. 13 about an unprecedented planetary alignment. It referred to a great cosmological drama that the producers believed to be a fulfillment of Revelation 12. A spokesman for the documentary trailer stated, “This is not Hollywood anymore; this is reality. This is where astronomy and the Bible meet.”

These prognosticators of doom and destruction are attempting to tie all these meteorological and cosmological events to the return of Christ. They cite Luke 21:27-28, indicating that “when these things come to pass, then look up, and lift up your heads: for your redemption draweth nigh.”

Although I know Wikipedia is not always completely reliable and their category of apocalyptic films is very broad-based, their website lists over 270 feature-length movies since 1950 that have to do with “the end of the world, a prelude to such an end, a post-apocalyptic wasteland setting, or a world taken over by a viral infection.”

I have three observations to make about the return of Christ and the end of time:

First of all, no one can predict the exact date of Christ’s return. According to Matthew 24:33-36 we may know when He is near, even at the door, but Jesus said, “of that day and hour knoweth no man, no, not the angels of heaven, but my Father only.”

In I Thessalonians 5:2 we are told that Jesus will return as a “thief in the night.” Matthew 24:44 says that Christ will come "in such an hour as ye think not. The thief comes not only when no one is watching, but when no one is expecting.” So, it was unwise for Meade or anyone else to set Sept. 23 as the date for the end of the world and the return of Christ.

Second, to think anyone could adequately prepare for the return of Christ by purchasing a survival kit or stocking a disaster pantry is ludicrous. When we heard that Irma was headed to the Atlanta area we bought some extra groceries and stocked up on water. I even bought some sand bags to protect our basement that has taken on water in the past. But stocking up on food and water and sandbags is not he proper way to prepare for the end of time or the return of Christ.

Third, the only way to prepare for the end of time and the return of Christ is to set your heart’s affection upon the Lord. Trust Jesus, the Son of God, alone as your Savior and as Titus 2: 12 says, while we eagerly await His return we must “deny ungodliness, worldly lusts; and live soberly, righteousness and godly in this present world” realizing that He could come at any moment.

Finally, a word to pastors – how long has it been since you preached a message on the return of Christ, the judgment, heaven or hell?

Those of us who preach do well to keep those eternal issues before our people on a regular basis. For every prophecy on the first coming of Jesus there are eight prophecies on His second coming. Our people need to know what the Bible says about the last days.