Note: This story has been updated to include a report on adopted resolutions.

Georgia Baptist Convention President Mike Stone led in focusing on reaching young people throughout the meeting. With the theme “Mission Possible: Reaching Generation Yet” and background of Psalm 78:1-8, Stone called on churches to re-evaluate their current methods of evangelizing and discipling children and students.

One of those tools rolled out during the first sessions was “This is My Story.” Acknowledging Fannie Crosby’s influence over the title, Stone spoke about the four-week discipling tool that could help students in becoming more comfortable sharing their testimony.

But that’s not the only things churches could see Stone, pastor of Emmanuel Baptist Church in Blackshear, pointed out to messengers.

“The amazing thing is, you’ll see a number of your student group come to know Christ as their Lord and Savior just in the process of teaching and preparing your saved students to share the gospel,” he explained.

A panel discussion the next day also dove into what churches need to do to win the younger generation for Christ.

"It was foundational that there is no evangelism that doesn’t begin and end with the next generation,” said Pastor Jason Britt of Bethlehem Church. “That was a top priority championed by me from the platform.”

Churches need to re-think their dependence on programming, a tried-and-true-method in the past, First Baptist, Buford Next Generation Pastor Jarrod Thompson noted. Reaching young people today requires more venturing outside of the church walls.

“We need to encourage our students and leaders … one-on-one discipleship is really important, Saturday morning breakfast with students, Thursday night after football … different things like that I really think are important,” he said. 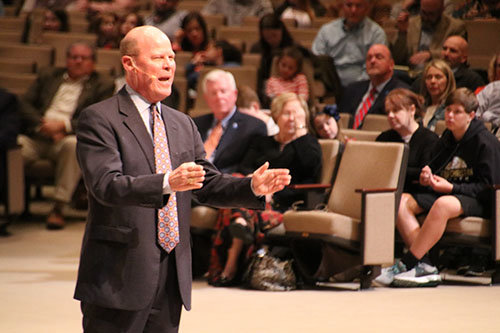 “Don’t Ever Stop!” cried Coram, using Mark 14:3-9 as his text. He stated, “Mary, the sister of Lazarus, poured expensive oil on Jesus over 2,000 years ago and we remember it tonight. God never forgets our faithfulness or our service.”

Coram urged the crowd to never stop in leaving their offering, living in obedience, or doing whatever they can to point people to Jesus. 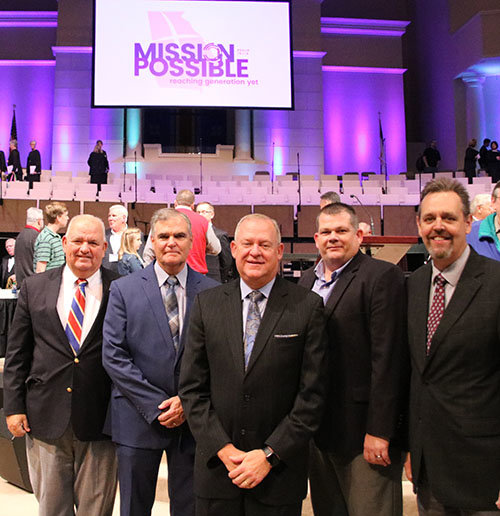 While GBC presidents are historically given a second unopposed term, Stone chose to not allow himself to be nominated in order to focus on his family, ministry at Emmanuel, and role as chairman of the SBC Executive Committee.

In addition to serving in their elected offices, these men will also become members of the Executive Committee of the Georgia Baptist Convention. 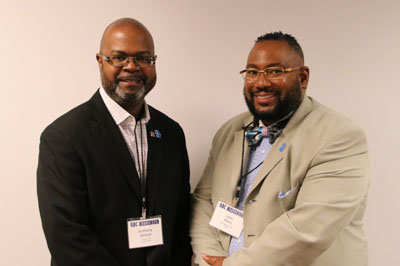 Baptists close in on 40,000 backpack goal

Last year’s goal of 35,000 was surpassed with a final tally of 38,641, reported state missionary Bill Barker. This year’s total is set at 40,000 but it will be several weeks before the final number is known.

Georgia collects half of the 80,000 backpacks for distribution throughout Appalachia as well as two impoverished associations in south Georgia. Appalachian Mountain Ministry, the outreach of the Georgia Baptist Mission Board, partners with 10 states to provide school supplies, warm winter coats, and Christmas gifts for children living below the poverty level.

Tony Branham, campus minster at the Armstrong campus of Georgia Southern University, loads another box of backpacks into one of two semi trailers at Second Baptist Church in Warner Robins. JOE WESTBURY/INdex

Ebenezer Baptist Church in Douglasville is one church that represents the vast majority of smaller churches that are energized by the annual event. Pastor Terry Braswell Jr. said his congregation, “which averages about 30 on a good Sunday,” collected 46 last year and surpassed that with 50 this year.

Their contribution found its way to Kentucky with 500 others from West Metro Baptist Association which took them directly to a ministry center.

Newman was saved and called into ministry when she was 13 years old. Several months later, she and Ray met. They dated throughout high school. In 1965, they married and he pastored churches throughout Georgia and Alabama as well as in Fort Worth, Texas while in seminary at Southwestern Baptist Theological Seminary. While there, Gwen worked as a secretary for the seminary.

Throughout their ministry, Gwen not only served alongside her husband in the many ways a pastor’s wife does, but as interim weekday director with her association, coordinating various ministries. In addition, she taught Sunday School, led missions organizations, and was a VBS director, organist, and music leader.

In a video interview made exclusively for the luncheon, Newman was interviewed by her son, Rusty Newman.

He asked for her advice to ministers’ wives. She said two main things: 1) Be in a right relationship with God and 2) Be submissive … to God, her husband, and her church.

“If she has that relationship with God together, all those other things will fall into place,” she said. 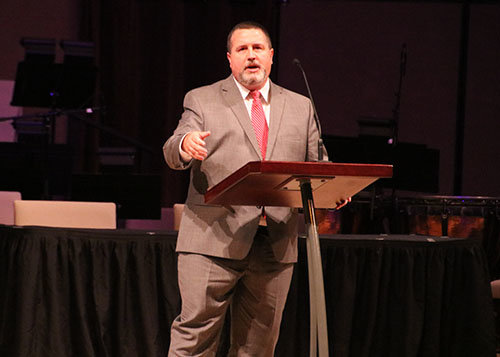 Rockmart pastor Barry Snapp, president of the GBC preaching conference, welcomed a large number of worshippers to rain-soaked Warner Robins on Monday afternoon and acknowledged that the men he invited to be a part of the conference were men he liked to hear preach.

The conference was blessed with the Christian music artistry of Rhon Carter, worship pastor at First Baptist Church in Statesboro, and his vocal team. The preaching conference, sponsored by New Orleans Baptist Theological Seminary, was accented by showers of blessings both literally and figuratively.

In addition to presenting the President's Address, Stone also filled in for evangelist David Miller Monday evening and hit a grand slam with his message.

Blackshear’s Emmanuel Baptist Church pastor made a passionate appeal for Georgia Baptists to reach our children and youth, and even those generations yet to come.

Stone exclaimed, “One pressing duty that we have is reaching the next generation. This duty cannot be delegated to the church, to the convention, nor to the clergy. We have tens of thousands of middle and high school students that should be trained and unleashed to reach their peers. It is a duty that cannot be delegated.

First Baptist Church, Pelham Pastor Matt Peek delivered the Doctrinal Sermon Tuesday morning, pointing to how Hurricane Michael impacted the area where he ministered. A similar devastation, he pointed out, happens to the Christian who stops looking to Jesus.

“People were in a panic, because they had lost their power; and they bought $700 generators to try to get some kind of power. I discovered that if you lose your connection, you lose your power; and I am afraid that we have lost our power. It appears to me that our baptisms, our Cooperative Program giving, our attendance, perhaps even our holiness is in decline.

"I would argue that we are in decline because we have lost our connection. In verse 5 of our text Jesus said, ‘apart from me you can do nothing.’ We need to return to an utter state of dependence upon God.”

Hulett began his sermon by talking about the mother who asked her young son to take out the trash and he responded by saying, “I ain’t going to do it.” 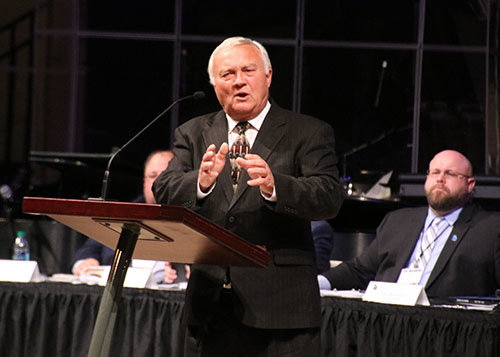 The lad responded. “Yeah, I get it. It sounds like there ain’t nobody going.”

Hulett indicated that Georgia Baptists are “not on the go with the gospel.” His sermon beautifully reinforced the theme that seemed to permeate the annual session of the GBC meeting.

Floyd pointed out a way Christians and pastors may misread Scripture as a way of not doing evangelism in their own lives.

Resolutions of appreciation as well as regarding hate crimes legislation

Georgia Baptists adopted three resolutions. While addressed appreciation to host church Second Baptist in Warner Robins and another to the ministry of retiring Executive Director J. Robert White, another spoke to hate crimes legislation in the state.

"There is an attempt on the part of some – and several bills have come up before the legislature in years past – that would curtail religious liberty of our churches, freedom of speech as well, give special consideration to groups and ... show partiality in judgement and jurisprudence," said Resolutions Committee Chairman David Mills, pastor of Beech Haven Baptist Church in Athens. "Even the U.S. Commission on Civil Rights has gone so far as to let it slip that they consider evangelicals a hate group."

The resolution, Mills explained, called for an opposition to any legislation that contained hate crimes language.

All three resolutions were adopted unanimously. To read them in their entirety click here. 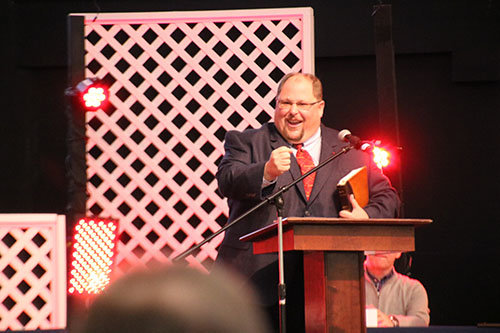 On a more serious tone, Williams recounted how he and his wife along with their children, ages 1 and 3, rode out the storm. “The last thing my wife and two boys heard before the power went off was the hurricane is making landfall and getting stronger. aren’t supposed to do that.”

Executive Director J. Robert White reported that from October 2017 through September 2018 Georgia Baptists collected $62,213,262.68 in mission dollars. Of that, 55.77 percent was sent on to the Southern Baptist Convention Executive Committee in Nashville. And while Cooperative Program giving year-to-date lagged behind by .1 percent, giving for October 2018 outpaced October 2017 significantly by 21.8 percent.

Gerald Harris, senior editor of The Christian Index, reported on The Index’s 73 percent growth in readership since 2016 as well as key stories driving online traffic. Among them were White’s announcement that he would be retiring at the end of the year and the announcement of Thomas Hammond as the choice to be White’s successor. 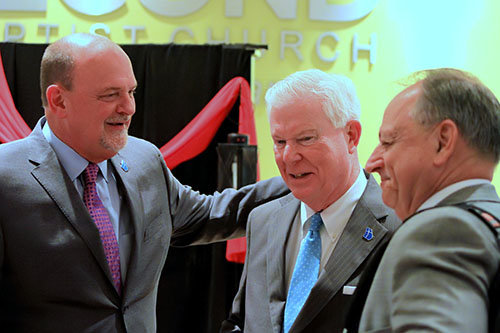 A reception was held at the end of Monday evening’s session in honor of Georgia Baptist Executive Director-elect Thomas Hammond and his wife, Kerri. Another reception was held the following night at the conclusion of the final session in honor of outgoing Executive Director J. Robert White, who will conclude 26 years in his position with Georgia Baptists at the end of the year. White will begin a new era of ministry Jan. 1 as president and CEO of the Georgia Baptist Health Care Ministry Foundation.