You may be asking 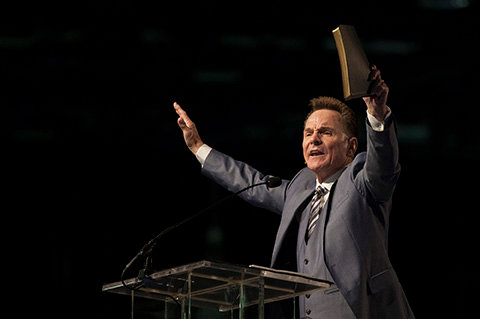 You may be asking: What is the Southern Baptist Convention's Executive Committee responsible for doing?

As the newly elected president and CEO, I will provide leadership as designated and authorized by the SBC's governing documents for the Executive Committee's work in handling the executive, financial, and fiduciary matters of the Southern Baptist Convention.

– Promoting the Cooperative Program across all churches, Baptist associations, and state conventions, which funds and fuels our Baptist Gospel work across every state, our nation and the entire globe – championing our vision of reaching the world for Christ.

– Assisting churches in stewardship education, calling everyone to use the resources God has entrusted to them for Gospel advancement.

– Providing a convention relations service, which involves interpreting who we are both to our people and to the general public.

– Providing a news service, known as Baptist Press, the largest of its kind in the United States.

The Executive Committee touches every realm of the Southern Baptist Convention as the largest non-Catholic, Protestant organization in the United States.

The most recent statistics indicate that the convention works with and supports:

– 47,544 churches
– 41 state conventions
– 1,131 local and regional associations of churches
– 3,671 international missionaries
– 5,262 domestic missionaries
– 22,028 seminary students in our six seminaries
–More than 30 ethnic minority and language fellowships representing nearly 11,000 churches
– The largest set of collegiate ministries in the U.S., both in terms of campuses reached and students impacted
– One of the three largest disaster relief ministries in the United States, working closely with FEMA, alongside the Red Cross and Salvation Army.

These 47,544 churches received more than $9.5 billion through their offering plates and online giving last year; they forwarded outside of their local churches at least three-quarters of a billion dollars last year for missions and Gospel advance through the Southern Baptist Great Commission ministries, including:

Southern Baptists continue to be about one thing: Reaching the world for Christ. There can be no doubt that presenting the Gospel to every person in the world and making disciples of all the nations is the convention's hallmark and mission.

I have been a pastor of a local church for 42 years, now in my 33rd year at Cross Church in northwest Arkansas.

I live to see the day when the Southern Baptist Convention becomes known not only for being a great evangelistic force and not only for getting the Gospel across the world, but that we also will become known as the greatest multi-generational, multiethnic, and multilingual denomination in the United States of America. We need to do everything we can to look in today's world like heaven is going to look one day.

So I will go from coast to coast, around the world, from north to south and use every element of technology to call us to stay true to who we are, our hallmark, the one thing that sets us apart in our commitment to take the Gospel of Christ around the world.

To that end, I will give my life in this next season 100 percent from before daylight until exhaustion until Jesus comes or until He calls me home.

Ronnie Floyd, senior pastor of Cross Church in northwest Arkansas, was elected by the SBC Executive Committee April 2 as its new president and CEO.