A long way from Chicken Road

JONESBORO — Jamie Dew's view from his current seat as a seminary president comes from a different perspective than most. His road there doesn't mirror others. It included a few more hiccups, a few more moments of doubt.

And, it included a dropped case of beer and busted taillight – two instances Dew credits as God working a miracle in his life. Those events, he told GO Georgia attendees Aug. 17, were part of dark days that led to brighter ones.

"Whatever your story has been, it's unique to Christ and what Christ has done in you," he said to those in the sanctuary at First Baptist Jonesboro.

Dew's path brought him to being named Chuck Kelley's successor at NOBTS earlier this year. "Seminary president" is just one title associated with the 42-year-old Dew, including philosopher, semianry dean, and apologist.

Dew grew up around a large, friendly family in rural North Carolina. His house was located on Chicken Road, he remembered. Dew's family were into tobacco farming.

He's proud of his humble beginnings, but his childhood was one shaped by his parents' divorce when Dew was in the second grade. That event haunted him for years.

"I can still remember it, like a video replaying every detail of that day [I learned] in my mind. My entire world was broken at that point," he said.

At school, he added, focus was simply beyond his grasp. "For the life of me, I couldn't get my mind to engage. I couldn't read, so I failed second grade. 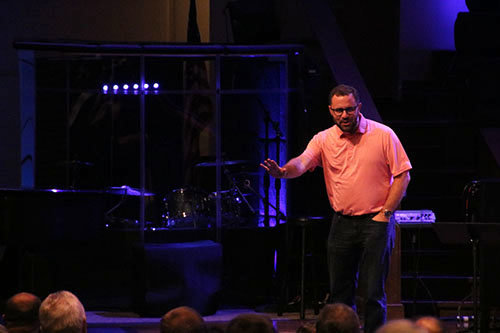 "My story was hopelessness and shame and brokenness," NOBTS President Jamie Dew said. "The solution for those were found in Christ." MYRIAH SNYDER/Index

"I was the 'dumb' kid. Classmates made fun of me. Teachers looked at me like I was stupid (one said so to his face). I went to summer school and did well enough to get moved up to third grade."

That, he stressed, "was a catastrophic mistake." He ended up failing third grade too.

Dew holds a Master's Degree in Pastoral Ministry from Southeastern Baptist Theological Seminary, where he was vice president for undergraduate studies and distance learning. He has two Ph.D. degrees – one in Theological Studies from SEBTS and another in Philosophy from the University of Birmingham, earned this year. He's served as a senior pastor and minister to adults and taught philosophy at SEBTS. An author as well, he wrote "Science and Theology: An Assessment of Alister McGrath's Critical Realist Perspective" and co-wrote books such as "Understanding Postmodernism: A Christian Perspective" and "How Do We Know?: An Introduction to Epistemology."

All that considered, to this day his two sets of twins – 9 and 11 years old – read faster than him.

As a young man, Dew said he knew what it was like to be pushed aside. "It gets absorbed into your personality," he pointed out. So, in fifth grade he became one of the kids who got involved in stuff he shouldn't. That escalated in middle school, then even more in high school, a time Dew remember being drunk more days than he wasn't.

"You can only smoke so much pot ... drink much beer ... party so hard that it continues to satisfy you. At some point covering the brokenness or trying to quench the thirst is like the person who is parched and famished."

That person drinks the ocean water to satisfy the craving, he explained.

But it's important to note how those sins are satisfying only for a moment, he stressed. That satisfaction doesn't last. "All of a sudden, the thirst is back," he said, "and it's greater than when it started."

Two events led Dew into finding something else to satisfy that thirst. Around this time, he said, he was beginning to realize some things.

"This life was exhausting," he admitted. "It only amplified the brokenness and fractured me more deeply."

He and his friends, he shared, had developed a routine of stealing beer from a grocery store where a friend working there would leave the back door open. Dew and others would simply walk in from the back, take a six-pack, and leave.

They became more brazen in the amount, though. One night they decided each of them would take two cases. One of his friends dropped his case of beer. The noise alerted someone, who called the police.

"Within 20 minutes the police had cornered us and came at us with their guns drawn," he testified.

"One of the best things to ever happen to me was one of those officers yanking me out of my jeep, slamming me on the car, and bouncing my head off the hood," Dew told the crowd. "It was one of those moments that will wake you up."

The future seminary president was bailed out of jail by his mom.

"I went to court and promised the judge I'd never do it again. The judge let me go and soon I was smoking pot while driving. I was pulled over for a broken taillight and arrested again."

He refers to these events in another truth he's learned: "Life's hard. It's even harder when you're stupid."

Those events made Dew realize something. "My life wasn't going the way it was supposed to go," he admitted.

He moved to Raleigh, North Carolina that night to live with his father. "Over the next eight months God began a process of breaking me. I'd been one of the 'cool kids' at my school, and now God was doing a work in my life to humble me."

He resisted. Students would say they were praying for him and Jesus loved him. They'd invite him to youth group and church. Yet, "I wanted nothing to do with Christianity," he said, Addressing those in attendance, he added, "I thought you people were dorks."

Dew eventually accepted an invitation to church. That turned into one friend in a youth group becoming 50 or 60. At a Centrifuge camp, he heard someone share a story mirroring his own.

"He began to talk about how he came to faith in Christ. He found hope, redemption, and life. As he spoke about what Christ had done in him, I began to see that ... was what I had been searching for my whole life." 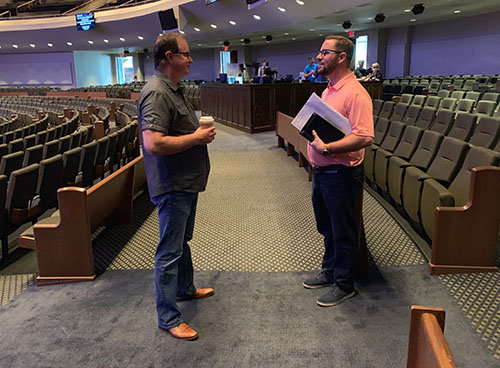 His whole story, he realized, wasn't about alcohol and drugs. "My story was hopelessness and shame and brokenness. The solution for those were found in Christ."

"What could God do with a kid like me from Chicken Road? Never in a million years would I have thought God could make me a pastor, a professor to train pastors, and a seminary president.

"God took that kid who couldn't read, who graduated from high school with a 1.6 GPA, and got me through college and where I am now. It's all Him."