A tour unholy in name, unpleasant by design 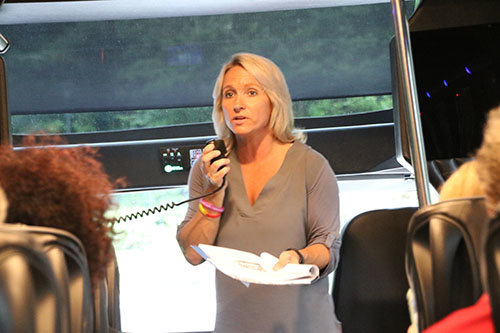 Kasey McClure shared her testimony that brought about 4Sarah, an organization dedicated to helping women leave the sex industry, on the Unholy Tour May 17. Several other speakers joined McClure in educating attendees to the scope of sex trafficking in the metro Atlanta area. SCOTT BARKLEY/Index

ATLANTA — It’s Thursday evening, and a group leaves the Georgia Baptist building for the strip club.

Actually, clubs. And, they’re going to swing by a few hotels and one apartment complex where human trafficking has been reported.

It should be noted that the purpose isn’t to participate, but observe. The Unholy Tour, jointly sponsored by Georgia state Commissioner Tim Echols and Georgia Baptist Public Affairs, ends up stretching nearly three hours instead of the scheduled two. Still, it doesn’t feel like enough time for the speakers standing at the front of the unmarked bus to tell their stories.

The dominant voice of the evening belongs to Kasey McClure. A former Atlanta stripper accustomed to making at least $1,000 most nights, McClure left that world after giving her life to Christ and the birth of her daughter. In 2004 McClure established 4Sarah, honoring her little girl while providing a platform to build relationships with women in the sex industry and, ultimately, a way out.

In the 15 years since she left the industry, McClure told The Index, the proliferation of sex trafficking has gotten worse.

“There are three main areas now where girls go – the strip clubs, on the street, and online,” she said. “Technology has made it tougher. Even though sites like Back Page have been shut down, others are doing the same thing.”

In addition, girls entering the sex industry are getting younger.

“It’s become something where these girls are promised great lives, but that’s not what they get,” she adds.

McClure recalled the impact of former Georgia Baptist public policy spokesman Ray Newman, who died in 2013 from a brain tumor.

“He came onto the board of 4Sarah in 2007 and encouraged me to start a scholarship for the girls we were helping,” she said. “He made a difference in my life.

McClure recalled a story shared with her by Newman’s widow, Gwen, in a letter. In the 1970s Ray told his wife about a young lady who he’d see walking to the club. He prayed for her to go to church one day.

One day she did. Speaking with Newman afterwards, the young lady said she didn’t feel she belonged at church. Of course, Newman urged her to consider that, yes, she belonged.

“So many times these women don’t feel like they belong. But, we all belong. We belong in the body of Christ,” McClure emphasized.

McClure’s voice was far from the only one for the evening, as eight other women plus Echols spoke with the group. Speakers included those fighting sex trafficking through law enforcement and legal means as well as some formerly in the industry now helping via non-profit groups.

Echols began the evening referring to William Wilberforce. The English politician became known for his fight against the slave trade, but knew he couldn’t accomplish his goal of abolishing it alone.

Wilberforce knew it would take a personal experience for his peers to join in the struggle, Echols explained. The commissioner told how Wilberforce would plan scenic tours of the Themes River, only for the tour to conclude at a slave ship. Its cargo may have since been discarded, but the stench of death and misery remained.

“Wilberforce wanted people to face the reality of the slave trade,” he explained. “My goal is to bring people in front of those like Kasey, who are trying to help women get out of this and put the bad guys away.”

Echols brought up when peers ask why he focuses on human trafficking, something that doesn't directly associate with his office.

McClure echoed the commissioner's urging of people being educated about the problem. Even though the tour wound its way through Norcross, the edge of Lilburn, Chamblee, Brookhaven, and into north Atlanta, anyone thinking this is a “big city” issue is mistaken.

Seedy hotels exist in small towns, too. And it’s not just hotels. At one point the bus stopped near an apartment building. McClure explained how a madam (Yes, it’s not unusual for women to enslave other women in the sex industry.) had operated from one of the residences. Looking at the complex, bus riders didn't see neon signs, but grills and children’s bicycles on the porches. There were no obvious signs of a prostitution ring.

Later on, the bus pulled near what’s become one of Atlanta’s most popular strip clubs. McClure says the place had become known for prostitution, explaining the packed parking lot that includes at least one minivan.

“Sex trafficking has become the second-biggest moneymaker in the country, behind drugs,” pointed out Lt. Sara Koth of the Forest Park Police department.

A mother of two, Koth said people are shocked when she explains how prevalent sex trafficking has become and Atlanta’s prominence in it. It’s become a societal problem, she added, when the knee-jerk reaction is to go after the victims.

“To arrest and throw them in jail, you’re feeding into the perception that they can’t go to the police for help. They’ll just get arrested,” she said.

Koth spoke to a common theme addressed by others on the bus. Those victimized by human trafficking experience a tough process trying to pull out of it. Often, they’re drawn to re-enter a lifestyle that – even if only for brief moments, at least – gave them some kind of value, as hard as that is to believe.

“The victims don’t always act like victims,” she admitted. “It can be hard when you work to get someone out of it, you even think they made it, and then they go back to it.

“You can’t take that personal. You go to the next person and try to help them.”

“Atlanta has become known to being among the worst, if not the worst, city in America when it comes to human trafficking,” he told The Index. “It’s important for churches to be knowledgeable. They should be able to educate their congregation on warning signs and dangers involved. Churches need to be able to minister to these victims.

“Overall, the tour helps show the need for better public policy regarding human trafficking and support for better law enforcement. Because of the internet and social media, it’s become a problem that really knows no boundaries.”

Speakers for the evening included:

Attendees heard about the difficulties and triumphs of helping sex trafficking victims as well as prosecution of perpetrators. Several oversee programs preparing kids to stay away from the industry. Others focus on helping young women get out of it. 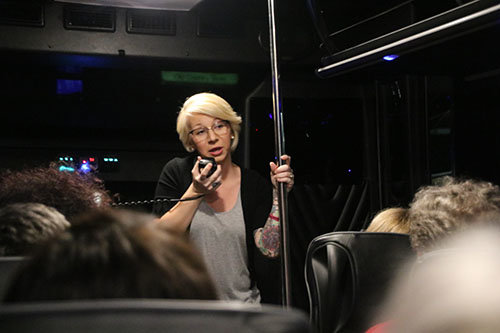 “We see women who get branded [by their pimp or madam]. Girls have come to us with ‘Pay me’ tattooed on their hand or ‘Snitch’ on their gum line. Bar codes, a crown, anything that symbolizes – it’s a form of ownership,” said Beasley, who worked in the sex industry prior to joining ARI.

McClure’s faith in God’s power to lead anyone out of the sex industry rests in her own testimony.

“My relationship with God changed me. When I took that final step out of the club, I had all the material things I thought would better my life. But they didn’t, so I thought ‘Why not try God?’

“Now when I talk to girls I ask them what they have to show for themselves. They may be staying with men in an extended stay hotel and unable to buy their own food. I was making $1,000-$2,000 a night and still wasn’t happy. The only thing that made me happy was stepping out on faith and depending on God.”

That step she took a long time ago, she said, has brought several more.

“I have a tenth-grade education, but now speak to teachers, doctors, lawyers, anyone who wants to hear me. God has opened up those doors for me because I decided to follow Him.

“He’s using my past to help others.”