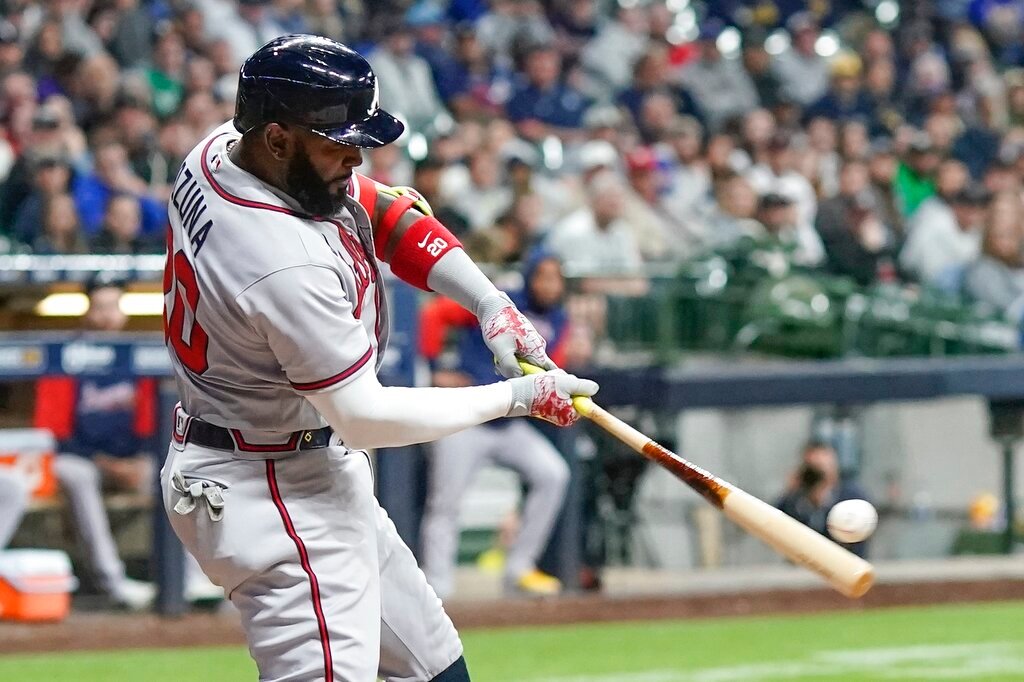 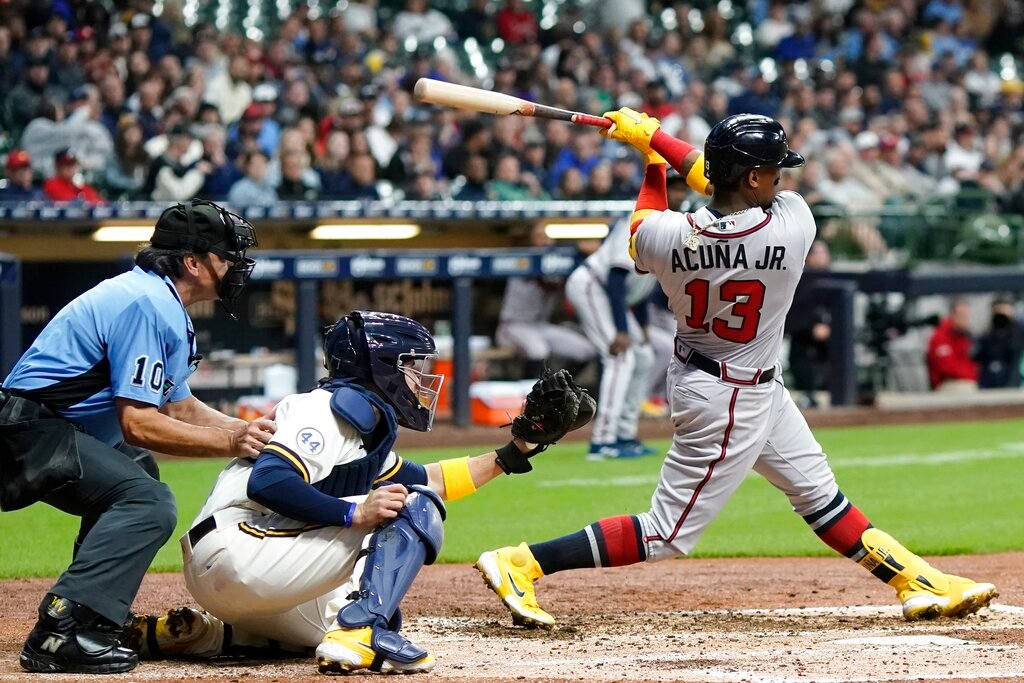 Atlanta Braves' Ronald Acuña Jr. hits the ball towards third base during the fifth inning against the Milwaukee Brewers, Tuesday, May 17, 2022, in Milwaukee. The ball that went off the glove of Brewers third baseman Mike Brosseau and headed into left field, allowing Adam Duvall to score an unearned run. (AP Photo/Morry Gash) 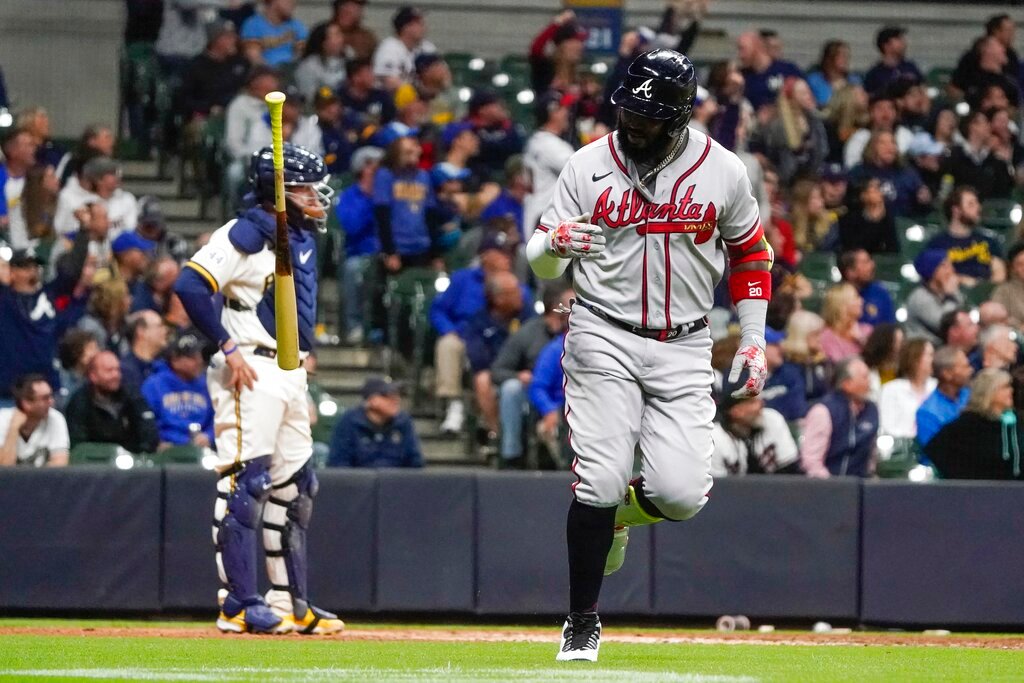 Atlanta Braves' Marcell Ozuna starts to round the bases after hitting a two-run home run during the eighth inning against the Milwaukee Brewers, Tuesday, May 17, 2022, in Milwaukee. (AP Photo/Morry Gash) 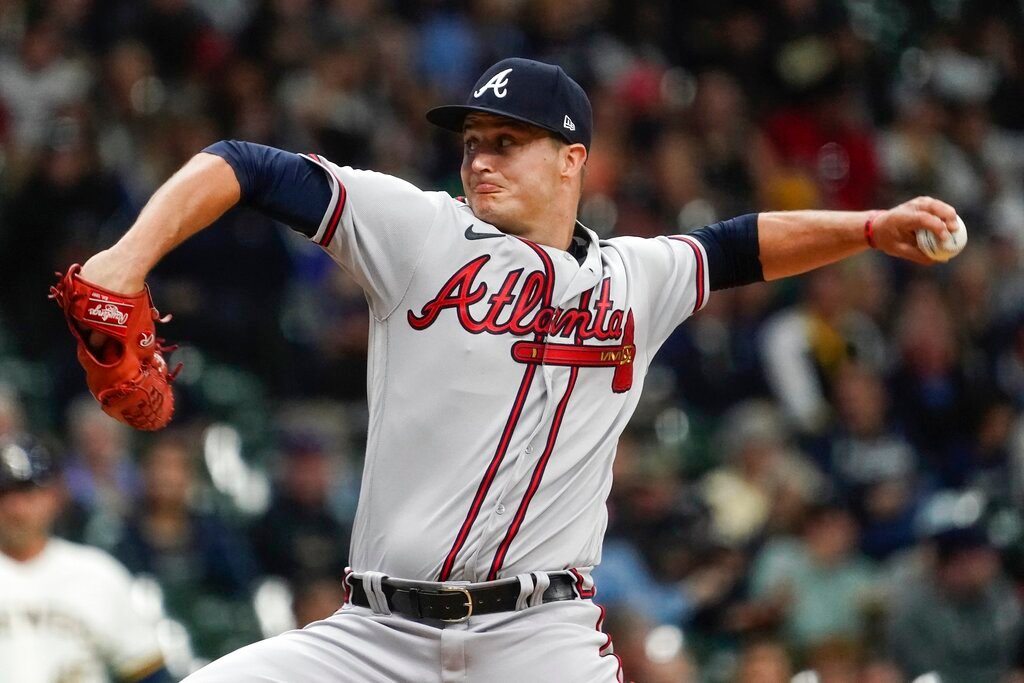 Atlanta Braves starter Tucker Davidson throws during the first inning against the Milwaukee Brewers, Tuesday, May 17, 2022, in Milwaukee. (AP Photo/Morry Gash)
Previous Next
Posted Wednesday, May 18, 2022 10:38 am
By STEVE MEGARGEE, Associated Press

Back atop the Atlanta lineup as the designated hitter Tuesday night after missing five games with a sore groin, Acuña opened the game by beating out an infield hit and later stole a base in the Braves' 3-0 victory over the Milwaukee Brewers.

“I do really feel good,” Acuña said through a translator. “I do feel healthy.”

The Braves have been cautious with Acuña as he comes back from a torn anterior cruciate ligament that caused him to miss the second half of the 2021 season. His performance Tuesday suggested he's ready to do more.

“He had some really good at-bats,” manager Brian Snitker said. “That was good to see with a little layoff. Everything checked out really well.”

Acuña went 1 for 3 with two walks and a run scored. In the eighth inning, he stole a base for the sixth time in 11 games and advanced from second to third on a relatively shallow fly to center.

Acuña was at the plate when the Braves ended a string of 20 straight scoreless innings. After Adam Duvall and Dansby Swanson started a fifth-inning rally with consecutive one-out singles, Acuña hit a ball that went off the glove of Brewers third baseman Mike Brosseau and headed into left field.

Ozuna extended the lead to 3-0 in the eighth with his sixth homer of the season, a 421-foot shot to left off Brad Boxberger.

That was more than enough for Davidson, who shut down the Brewers in his five-inning stint after getting called up from Triple-A Gwinnett earlier in the day. He arrived in Milwaukee about 11 a.m. and struck out three while allowing three hits and three walks.

“I was supposed to start in Gwinnett today,” Davidson said. “So I just kind of (thought), ‘Hey, it’s your day. Just go and continue to be on your routine.'"

The Brewers loaded the bases in the eighth on three walks before Lorenzo Cain hit a two-out grounder to the left side of the infield. Braves third baseman Austin Riley made a nice play going to his left to field the ball before throwing to first baseman Matt Olson, who caught it on a bounce.

Kenley Jansen retired the side in order in the ninth for his ninth save in as many opportunities.

Brewers starter Adrian Houser (3-4) allowed just one unearned run in six innings while striking out six and walking two, but he didn't get any run support. The Brewers left 10 men on base and went 0 for 5 with runners in scoring position.

“We had chances,” manager Craig Counsell said. “We didn’t cash in on those chances.”