All-around thanks: White's 25 years celebrated, honored by many

Georgia Baptist Executive Director J. Robert White expresses thanks alongside his wife, Janice, to those gathered at the annual meeting following a string of congratulatory videos and testimonies on White's 25 years in his position. SCOTT BARKLEY/Index
Posted Thursday, November 16, 2017 5:22 pm
Scott Barkley

Georgia Baptist Executive Director J. Robert White expresses thanks alongside his wife, Janice, to those gathered at the annual meeting following a string of congratulatory videos and testimonies on White's 25 years in his position. SCOTT BARKLEY/Index

LAWRENCEVILLE — In person and on video, friends and colleagues congratulated J. Robert White on 25 years as executive director for Georgia Baptists Nov. 14 toward the conclusion of the GBC annual meeting.

"It was 25 years ago met in our annual meeting that your Executive Committee unanimously elected Dr. J Robert White as our executive director," noted Mike Stone, pastor of Emmanuel Baptist Church in Blackshear, in kicking off the portion of the Tuesday afternoon program dedicated to the commemoration.

Stone referenced the environment in Georgia Baptist life circa 1992. It was, he said, a time of tumult. During the Conservative Resurgence it required "an act of God" for complete agreement among Baptists such as the one bringing White to Georgia.

"You're one of my best friends and somebody I have such regard for," commented Anthony Jordan of the Baptist General Convention of Oklahoma. "You're a visionary leader and done a remarkable job ... for Georgia Baptists."

Rick Lance of the Alabama Baptist State Board of Missions talked on White being a resource. "I don't know how many times I've thought to myself 'I need to talk to Bob White about that' when I have a challenge or problem," he remarked .

Pointing out the Georgia executive director's roots in his home state, Lance continued, "You've meant a lot to Alabama Baptists. ... I appreciate you walking the path – the journey – with me and with others. You are a Barnabas, an encourager."

Other video messages brought compliments from Milton Hollifield, executive director-treasurer of the Baptist State Convention of North Carolina, and Jim Futral, executive director-treasurer of the Mississippi Baptist Convention Board. Southern Baptist Convention Executive Committee President Frank Page couldn't attend in person but extended his thanks and congratulations on video as did First Baptist Woodstock Pastor Johnny Hunt, who was en route to help facilitate a pastors conference in Southeast Asia. 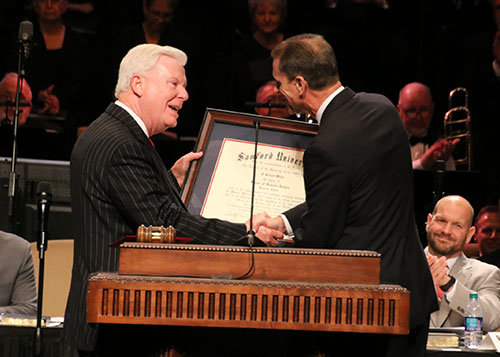 Sing Oldham, vice president for SBC Communications and Relations, delivered a resolution of appreciation to White's leadership and championing the Cooperative Program. 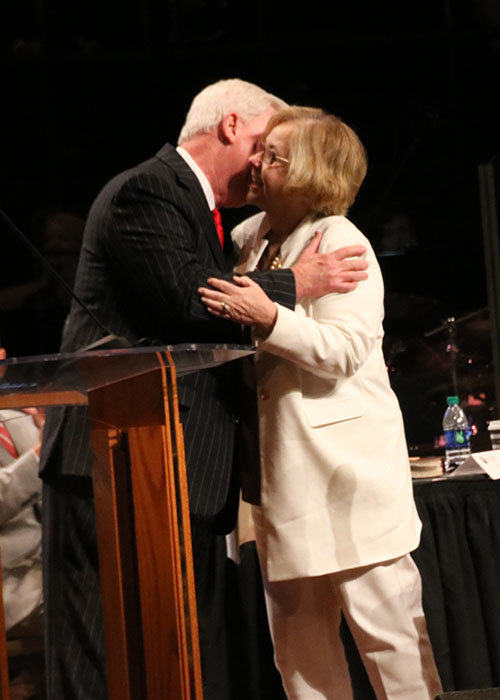 Georgia Baptist Convention Executive Director J. Robert White embraces his wife, Janice, upon recognition for her role in his ministry to Georgia Baptists in his position for the last 25 years. SCOTT BARKLEY/Index

Perhaps the biggest round of applause came for White's wife, Janice. "Behind every successful man is a better woman," expressed Jimmy Blanton, director for Columbus Baptist Association.

After calling her forward, Blanton continued. "We could never show to her our deepest appreciation for ... her sacrifice. Time away from her husband ... a lot of nights when he was restless. She has given beyond the call of duty."

"Janice and I talk continuously about how miraculous the reality that God would call us to serve among Georgia Baptists. We feel so deeply blessed," said J. Robert White. "This is, I believe, a uniques Baptist state convention. Love truly dwells here, and there's a wonderful spirit in this place. I find this spirit all over the state of Georgia. The key to that is you."

White went on to express his thanks to Stone and all who played a part in putting together the celebration.

At the conclusion of the program, Stone announced that a special commissioning of "Great is Thy Faithfulness" – one of White's favorites – had been presented for the occasion. Then, the Jubal Chorus performed the special-commissioned hymn for the first time.

After the final gavel of the GBC meeting, a final Anniversary Celebration of White's 25 years was held in the North Metro Fellowship Hall.

Thanks from a young pastor

Before giving a prayer of thanksgiving, though, First Baptist Buford Pastor Stephen Fountain, a member of the Administration Committee, recalled another White anecdote. 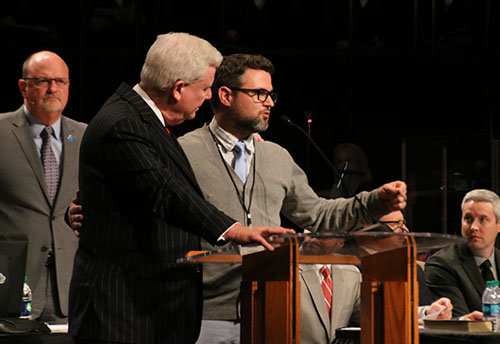 Stephen Fountain, pastor of First Baptist Church in Buford, prepares to lead the prayer of thanksgiving concluding the commemoration of J. Robert White's 25 years as executive director. Although first meeting White when he was an eight-year-old boy, Fountain, a member of the Administration Committee, spoke on White's willingness to listen to and encourage a young pastor's perspective. SCOTT BARKLEY/Index

"I've been a Georgia Baptist my whole life," said Fountain, 33, before turning to White, "and you're the only executive director I've ever known."

"I asked him how old he was when I became executive director," White told the crowd. "He had the nerve to say, 'Eight'!"

Moving on, Fountain recalled moments that could've seemed fleeting to some. To the young pastor, it meant a lot.

At Administration Committee meetings, Fountain admitted to often watching the "much wiser, older, smarter" instead of speaking. Sensing the need for a younger perspective, White would often then turn to Fountain and ask, "Stephen, what do you think?"

"It can be intimidating when those bright, blue eyes look at you and ask that question," Fountain stated. "But it is honoring to know that you care and value the thoughts of a young guy."