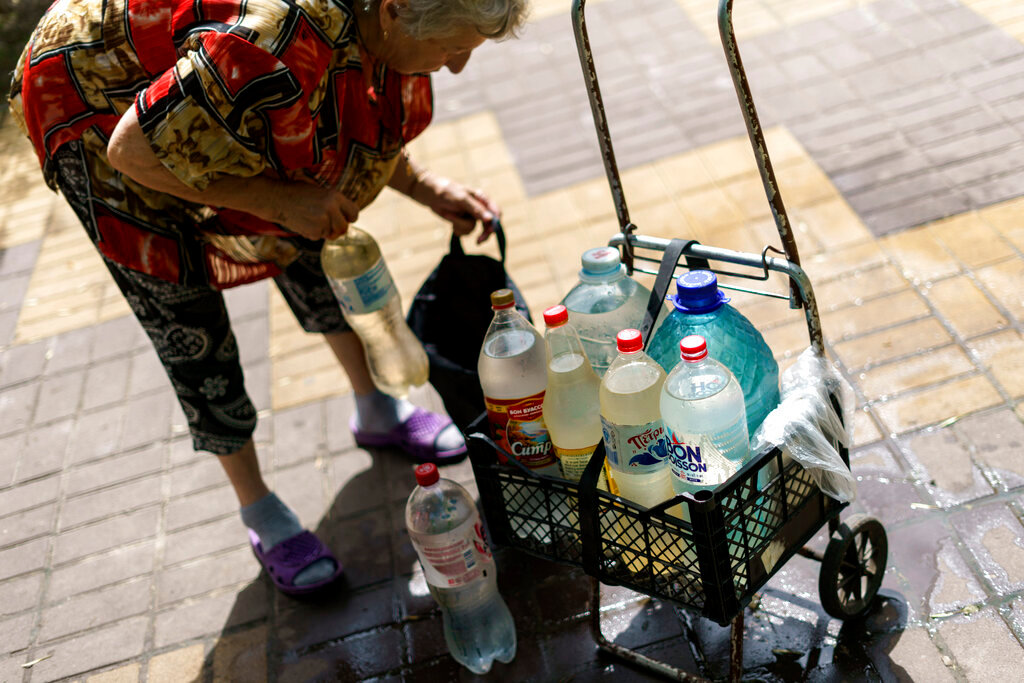 Lyubov Mahlii, 76, packs a crate with water bottles she filled up at a public tank to take back to her apartment in Sloviansk, Donetsk region, eastern Ukraine, Saturday, Aug. 6, 2022. (AP Photo/David Goldman) 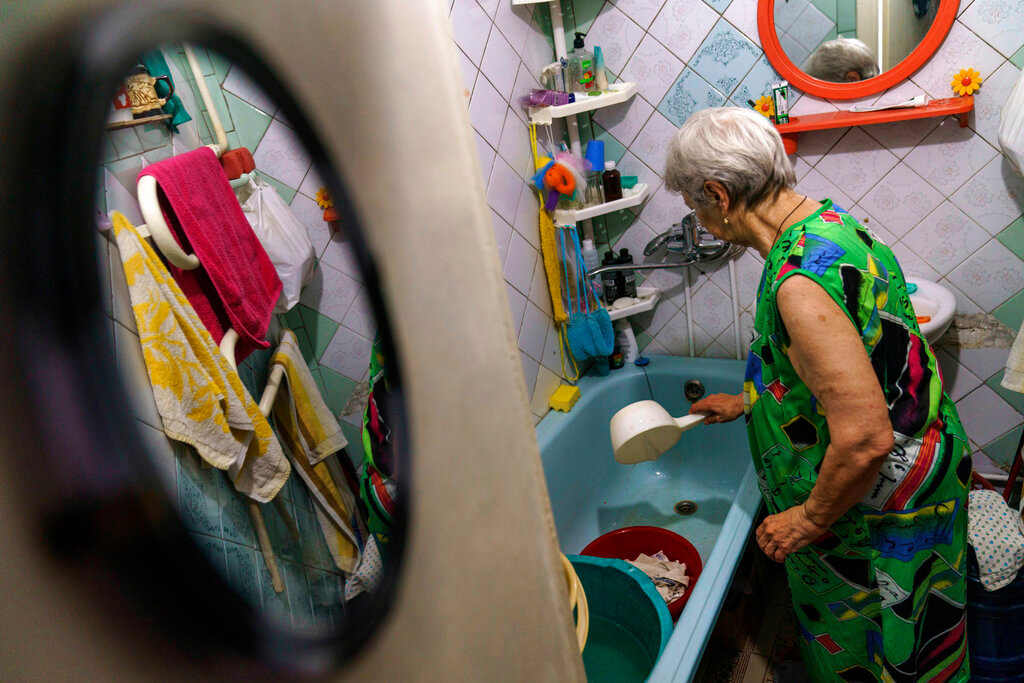 Lyubov Mahlii, 76, washes towels in her bathtub with water dragged up four flights of stairs from a public well nearby at her apartment in Sloviansk, Donetsk region, eastern Ukraine, Sunday, Aug. 7, 2022. (AP Photo/David Goldman) 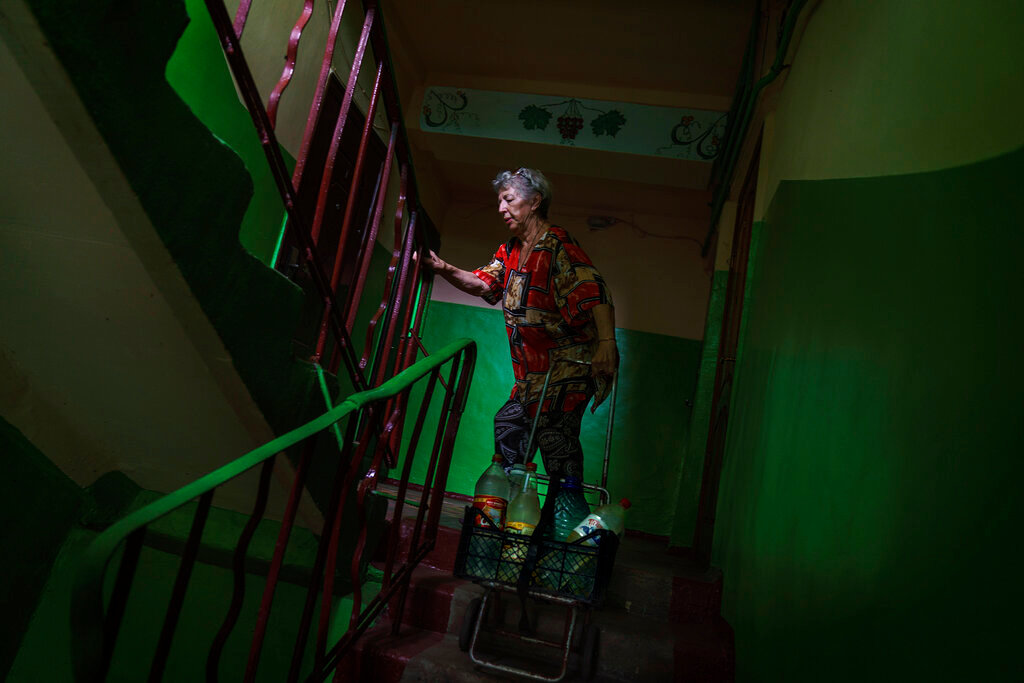 Lyubov Mahlii, 76, pulls a crate of water bottles up the stairs to her fifth-floor apartment after filling them up at a nearby park in Sloviansk, Donetsk region, eastern Ukraine, Saturday, Aug. 6, 2022. (AP Photo/David Goldman)
Previous Next
Posted Monday, August 8, 2022 9:18 am
By JUSTIN SPIKE, Associated Press

SLOVIANSK, Ukraine (AP) — The echo of artillery shells thundering in the distance mingles with the din of people gathered around Sloviansk's public water pumps, piercing the uneasy quiet that smothers the nearly deserted streets of this eastern Ukrainian city.

The members of Sloviansk's dwindling population emerge — a few minutes at a time — only to fill up at the pumps that have been the city's only water source for more than two months. Fighting between Ukrainian and Russian forces near the key city in the Donetsk region has damaged vital infrastructure that has cut residents off from gas and water for months.

The water flows for now, but fears grow that come winter the city, which is only 7 miles from Russian-occupied territory, could face a humanitarian crisis once the pipes begin to freeze over.

“The water infrastructure was destroyed by the constant battles,” said Lyubov Mahlii, a 76-year-old widow who gathers around five gallons of water twice a day from a public tank near her apartment, dragging the plastic bottles up four flights of stairs on her own.

“When there are bombings and sirens, we keep carrying it," she said on Sunday. "It’s a great risk for us, but what can we do?”

Only a fifth of the city's pre-invasion population of 100,000 remains. With heavy fighting raging only miles away as Russian forces continue their push on Donetsk — part of the industrial Donbas region where Moscow-backed separatists have been battling Ukrainian troops since 2014 — residents defy the shelling to make do with the only water source left. And local officials believe things will only get worse once the cold sets in.

Locals fill their bottles with hand pumps or from plastic tanks at one of five public wells before hauling them home in bicycle baskets, wheeled carts, and even children's strollers.

Speaking from her tidy kitchen after one such trip, Mahlii said she boils some water for at least 15 minutes to make sure it's safe for consumption. The remainder is used for bathing, washing clothes and dishes, watering plants, and taking care of a stray dog named Chapa.

Following the death of her husband, Nikolai, from diabetes four years ago, Mahlii shares her Soviet government-provided apartment with two bright yellow canaries and an assortment of houseplants.

Water she had gathered filled the plastic tubs and buckets stacked on every flat surface in her small bathroom, while empty plastic bottles lined the walls in her hallway. A meat and vegetable soup was cooking on an electric burner for lunch.

Ukrainian President Volodymyr Zelenskyy issued a mandatory evacuation order to all residents of the Donetsk region at the end of July, saying remaining would cost lives. But despite that and the terror that accompanies the shriek of falling rockets near the city, with no money to relocate and nowhere to go, Mahlii plans to stay in Sloviansk — no matter what.

Another Sloviansk resident, Ninel Kyslovska, 75, gathered water from a tank at a park on Sunday for marinating cucumbers in the sun that afternoon. She said the scarcity had upended all aspects of her life.

“Without water, you won’t get anywhere. I have to carry 60, 80, 100 liters of water a day and it’s still not enough,” she said. “Bread and water are sacred and they just took it from people. Such actions must be punished, maybe not by us, but hopefully by God’s judgment.”

Filling her bottles, Kyslovska said she sometimes avoids bathing to save herself a trip to the park and often washes her clothing in a nearby lake.

She blamed the local government for the lack of running water, complaining that nearby Kramatorsk — just 6 miles to the south — still had water flowing from its taps.

But Oleksandr Goncharenko, the head of Kramatorsk's military administration, said even that comparative luxury was threatened by winter when the temperature drops to -4 F.

"All these wells and pumps will freeze,” Goncharenko said, adding that places like Sloviansk and Kramatorsk — which also has no gas — had become “hostages of destroyed infrastructure.”

Goncharenko said Kramatorsk would drain municipal pipes that run into unheated structures to prevent them from freezing and bursting, and that he was “99% certain” that gas wouldn't be restored before winter. Electricity cuts and the lack of heating could also see the fire risk soar as people try to heat and light their homes by other means, he added.

Ukrainian officials are still trying to convince the Donetsk region's remaining residents to evacuate as the war's front line threatens to move westward and the inhospitable winter looms.

Officials in Kramatorsk plan to build more public wells to supply the remaining population, but Goncharenko warned the water quality couldn't be guaranteed. Such water would likely be sourced from deep underground, he said, which would be too high in calcium and unfit for drinking.

Mahlii hasn’t made plans for what she’ll do once cold weather arrives, but after 47 years in her Sloviansk apartment, she will face whatever comes from her home.