A family from Brunswick who fled their coastal home are finding safe haven at First Baptist Church of Cuthbert. BEN CROWDIS/Special

Location wise, Moultrie and Cuthbert are about as close to Ground Zero as The Index has been able to determine regarding ministry to Hurricane Irma evacuees.

Or it could be Valdosta. Or any other place in south Georgia as the storm wobbles north into the state today as a much-downgraded tropical storm.

Yesterday’s Index report focused on how churches in the Southeast portion of the state were involved in outreach to evacuees.

Today this report will begin in the Southwest and move up the state, moving through the Atlanta suburb of Lilburn and on up to Athens. While this report does not pretend to be exhaustive, it is based on feedback from churches who contacted The Index or pastors who were able to step away from hectic ministry long enough for a brief interview.

CUTHBERT — “It’s good to see our body of believers so involved in meeting the needs of our community,” Pastor Ben Crowdis says this morning as he looks around the activity at First Baptist Church.

Up to 20 members are being the hands and feet of Christ as Hurricane Irma evacuees take up temporary residence at the Red Cross shelter being hosted by the Southwest Georgia congregation. Today some evacuees are watching the storm on television, others are enjoying a meal, others getting to know strangers or church members who are hunkered down as the full force of the now-tropical storm passes through town.

Some evacuees are from Florida but an increasing number are from less stable housing such as manufactured homes who are being encouraged to seek better shelter. Hurricane force winds of up to 80 miles per hour have been predicted for today. 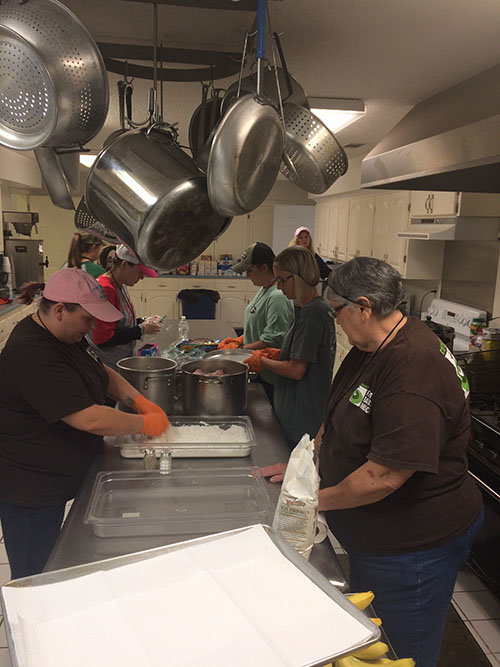 The food team at First Cuthbert are working around the clock to provide nourishing meals to its evacuees. BEN CROWDIS/Special

He reported that several large trees are now down in town and winds are picking up, though not as strong as originally expected … “which is a blessing.”

Cuthbert may not be on a major interstate but that doesn’t mean it’s off the beaten path of evacuees. It sits at the crossroads of Highway 82, a main evacuation route out of the Florida Panhandle and Highway 27 which runs nearly all the way to Miami.

While the Red Cross is providing cots, a 24/7 nurses station, DFACS assistance, and security, the church is providing all meals. Kitchen volunteers like Bubba and Janice Standley “have been here since the very first need, planning out all the meals,” Crowdis says.

In an interview last night the Randolph County pastor said that he and his volunteers “are now here for the duration, we have our last team of volunteers coming and we don’t want any more of our people out on the roads. Our current teams will be here until the storm passes over. We don’t know when that will be, but it will get here on its own schedule.”

Guests are being housed in the Family Life Center with its 50-cot capacity and two sets of showers. Currently 37 guests are being housed. The church had 37 guests at noon today and sent 42 bagged lunches over to the Methodist church which had been called into service to house clients moved from a nearby drug rehabilitation center.

“We have 10 people now but can house about 25 in Sunday School rooms and such. We have a very sturdy block building and are finding some comfort in that,” he notes. Some people who have time to evacuate are bringing their own sleeping mattresses such as air cushions while others are taking advantage of whatever the church can provide," he said.

Further up the road, First Baptist Church of Cordele is hosting nearly 30 staff from a Savannah-area nursing home which transported its residents to central Georgia. 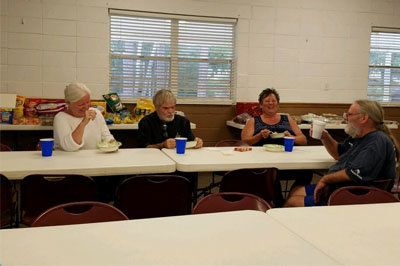 Barbara Jacobsen, back right, celebrates her birthday with evacuees and peanut butter ice cream at the Friendship Baptist Association camp outside of Americus. Bart and Lorraine Patria, left, are from Winter Garden, FL, while Barbara Jacobsen and her husband, Gordon, right, are from Bradenton, FL. LAUREN MOYE/Special

Outside of Americus, evacuees are being treated to a safe haven at Friendship Camp, a ministry of Friendship Baptist Association. Lauren Moye, media contact at Brewton-Parker College, reported for The Index from onsite that 125 volunteers or donors have provided their time or supplies to keep the camp running.

Camp Director Lance Fendley thanked churches of the Association for their outpouring of diapers and other resources. The camp sleeps 170 in bunkhouses and has housed as many as 90 in the past several days. Due to good word-of-mouth through emergency services and local media, guests are finding their way the 47 miles off I-75 to take advantage of the free room and board.

The camp was hosting 80 guests this afternoon and expecting more as the storm moves across the state. Director of Missions Charles Stoop expressed appreciation for Associational churches that are preparing and serving meals for the guests.

First Centerville pastor Don Feezor reported the church has opened its Family Life Center and is housing evacuees from as far away as Miami and Newport Richey, FL. He is also seeing an increased number of locals from manufactured housing communities.

Neighboring Shirley Hills Baptist Church offered its campus for overflow housing but at Monday afternoon it had not be put into service. Feezor believes the Centerville’s 100 capacity will be adequate. 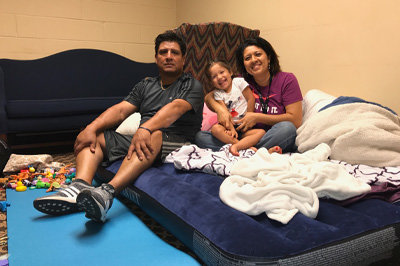 Isabella Herandez, age 3, plays with father Hiram Herandez, left, and mother Alma Ramirez in Lilburn on Sunday afternoon. They are among more than 100 from a sister church who fled Savannah under mandatory evacuation orders. The Savannah church is being sheltered at Iglesia Bautista Hispanoamericana in the Atlanta suburb. JOE WESTBURY/Index

The church in Rehoboth Baptist Association was originally expected to house Red Cross workers but that option was not needed. It is now serving as an outreach of the church; community support has been “exceptional” with a hotel loaning towels and donating shampoo and soap.

In Lilburn, in suburban Atlanta, more than 100 members of Primera Iglesia Bautista Hispana in Savannah began arriving in the middle of the night on Thursday and Friday under mandatory evacuation orders. Then pastor Samuel Rodriguez, who was already in Lilburn, received a call from a Florida church with 50 members who were seeking shelter.

The church caravan had fled St. Petersburg, FL, and dove to North Carolina seeking housing but when none was to be found, drove back down the coast to Savannah. That’s when it searched online for local Hispanic churches and the Savannah church appeared with its contact information.

Rolando Ruiz, pastor of Iglesia Bautista Hispanoamericana in Lilburn, opened its doors to the group who then drove another 6 hours to the suburban Atlanta church. By the time it arrived the group had been on the road for 24 hours in multiple vehicles. The Lilburn church is now temporary home to 150 drop-in guests courtesy of the storm.

Rodriquez's church was hosted by the Lilburn congregation last October during Hurricane Matthew's assault on coastal Georgia. The two pastors have had a longtime ministry relationship. 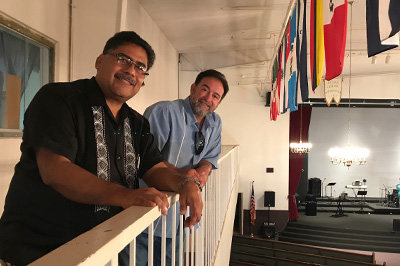 Further up the state. Beech Haven Baptist Church in Athens opened the doors of its Family Life Center to 73 evacuees. Pastor David Mills said “about 29 are from Primeria Inglesia Bautista Hispano de Indiantown FL, a church we visited this summer for a mission trip.

“An additional 44 are from Inglesia Baustista Latinoamericano from Savannah. We have the pastor’s son as an intern. This church helped in 2015 with a sports camp here in Athens.”

Down around the I-16 corridor between Savannah and Macon, pastor Tom Vann of Rentz Baptist Church reports his congregation is housing guests from Benton House in its Family Life Center. The coastal area evacuees arrived Thursday night to ride out the storm.

Closer to Savannah, the bedroom community of Springfield Baptist Church fed hamburgers and hot dogs to hundreds as evacuees fleeing coastal areas leading up to the storm. The church also provided financial assistance for gasoline to the travelers but cancelled its Sunday services due to threatening weather conditions.