At Hanoi Hilton, he was POWs' de facto chaplain 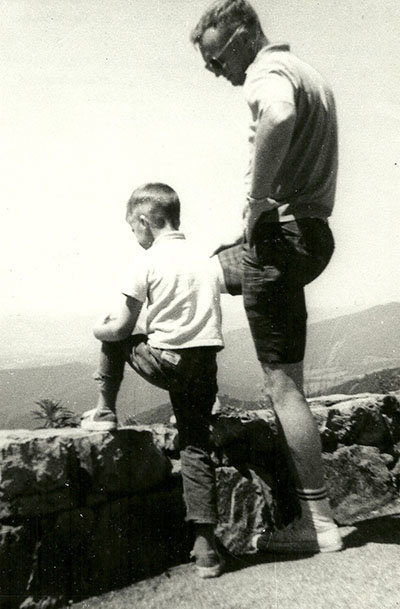 Before Navy Captain Eugene "Red" McDaniel deployed to Vietnam, he took his sons on a camping trip. Seven-year-old David clung to this photograph during his father's absence. Photo courtesy of Red McDaniel[/caption]

ALEXANDRIA, VA (BP) — Dorothy McDaniel knew all about Navy life. The hardships. The sacrifices. The loneliness. The pride a family has for their family member's service. So the day in 1967 a shiny black car pulled into her Norfolk driveway and two uniformed officers emerged, she knew.

"Red is down," one of the officers said.

Her husband, Navy Captain Eugene "Red" McDaniel, was beginning six years of imprisonment in North Vietnam as a POW – and de facto chaplain at the infamous "Hanoi Hilton" prison among American detainees.

McDaniel was flying his 81st mission on his 35th birthday, May 19, 1967. The career military man had piloted an A-6 intruder jet carrying 13,000 pounds of bombs from the USS Enterprise for about 18 months. He was close to finishing his Vietnam War tour.

With his navigator-bombardier partner Lt. James Kelly Patterson, age 27, strapped in beside him, they joined a formation of 23 other aircraft.

"We became a team," McDaniel said of his 900 flight hours with Patterson. "We had a real good relationship. He was a man of great integrity and did not indiscriminately drop bombs."

The squadron's assignment was an Alpha Strike, which meant the Joint Chiefs of Staff had planned this "maximum effort" against North Vietnam. Their destination was Van Dien, just south of Hanoi, where they would bomb a truck repair center.

The Vietnam War had escalated, which led to increased bombing runs into the north. Plus, May 19 was Ho Chi Minh's birthday. This sortie would likely interrupt whatever celebrations Hanoi had planned. 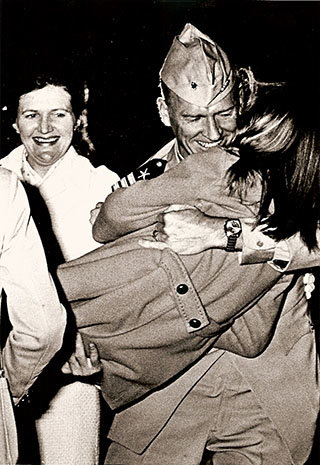 When McDaniel returned to the U.S. after six years as a POW in North Vietnam, he embraced his wife Dorothy, hugged his children, and then picked up his daughter Leslie who was about 11 years old. Between deployment and imprisonment, Leslie had few memories of him. Photo courtesy of Red McDaniel[/caption]

Shortly after crossing into North Vietnam at Thanh Hoa while traveling close to the speed of sound, they locked in their Van Dien target even as the North Vietnamese began firing SAMs (surface to air missiles) at the American jets.

McDaniel was able to dodge four SAMs, which he could detect and see. But one enemy missile exploded nearby out of his sight, spraying shrapnel into his A-6.

The damage took out the hydraulic systems and rendered his controls inoperable. Looking ahead from his burning aircraft as it traveled more than 600 miles per hour, he could see a mountain range.

McDaniel and Patterson prepared for ejection, knowing their escape from the aircraft would be jarring at that speed, which was faster than recommended for ejections. Patterson launched first on one side of the mountain. A second later, McDaniel ejected and landed on the other side. He never saw Patterson again.

As McDaniel floated to earth, the enemy fired their rifles at him.

"You're fair game until you hit the ground," he said.

He didn't hit the ground right away. Tall jungle trees entangled his parachute, leaving McDaniel hanging about 40 feet off the ground. He climbed up the parachute to get a better position in the trees and then tried to shimmy down a tree trunk. He slipped and fell, crushing two vertebrae that rendered him partially paralyzed.

Twenty-six hours later, eight North Vietnamese – two military and six locals – took McDaniel into custody. He was the 200th American prisoner of war whom the North Vietnamese had shot down.

The 6'3" McDaniel was a valuable propaganda asset for the North Vietnamese military. Regardless of his injuries, the enemy exploited him by digging holes, putting him in the holes stripped down to his underwear, and inviting villagers to spit, slap, and throw objects at him. 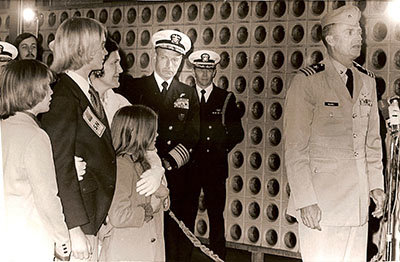 "They were using us to rally their people," McDaniel said of how the North Vietnamese treated prisoners.

The captors displayed him at two military bases before arriving at the Hanoi Hilton, formally known as Hoa Lo Prison. McDaniel felt relief to be away from the angry mobs.

That relief was temporary as two weeks of intense interrogation ensued with torture and body bending. He came out of that first interrogation with dangling hands and nerve damage to his feet.

The North Vietnamese moved McDaniel several times, but the bulk of his 2,117 days of incarceration were at the Hanoi Hilton.

The 220 American POWs developed a complicated system of communication by tapping. Constant communication kept the men alert and informed. They were also able to build consensus, including the desire to have a worship service.

The North Vietnamese said no.

But after the American POWs sang at the top of their voices for two and half days, the North Vietnamese relented and allowed the right to worship for 10 minutes per week with a four-man choir.

"Do you ever think I'll take lightly the right to worship God?" McDaniel asks today. 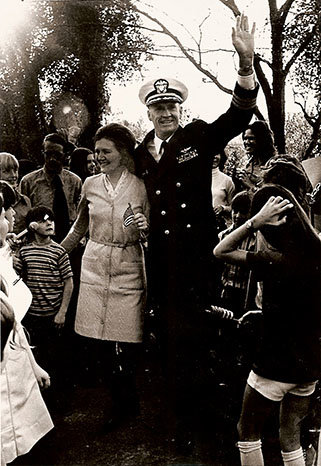 McDaniel and his wife Dorothy greet several hundred neighbors who celebrated his return from captivity in North Vietnam. Photo courtesy of Red McDaniel[/caption]

McDaniel was a sharecropper's son whose family didn't attend church regularly, partly because they couldn't afford "church clothes." When he graduated from high school, he received an athletic scholarship in 1950 to Campbell College in Buies Creek, NC, which was then a North Carolina Baptist two-year college. That first night, he met Dorothy Howard, whom he married six years later after graduating from Elon College in North Carolina.

McDaniel soon accepted Christ as his personal Savior and credits Dorothy for having great influence on his spiritual life.

His faith was evident enough at the Hanoi Hilton that his fellow POWs looked to him as their chaplain, which meant he did most of the preaching at their worship services.

McDaniel's cell was the hub of the communication between prisoners. When some of the prisoners attempted an escape in 1969, the North Vietnamese suspected McDaniel had facilitated the escape. The enemy's retribution toward him was relentless.

He went seven days and nights without sleep as the North Vietnamese beat him five to seven times with fan belts. McDaniel also suffered rope torture and electric shock while being served half rations.

"They had a battery and would put ropes and wet rags around your arms," McDaniel said. "They would run current for several hours."

McDaniel lost between 50 and 60 pounds in those two weeks. But the courageous Navy officer never cracked or finked on his fellow servicemen. His wife wouldn't know if he was dead or alive for three years.

"Courage is not the absence of fear," McDaniel said. "It's the presence of faith. I clung to the one thing they could not destroy." 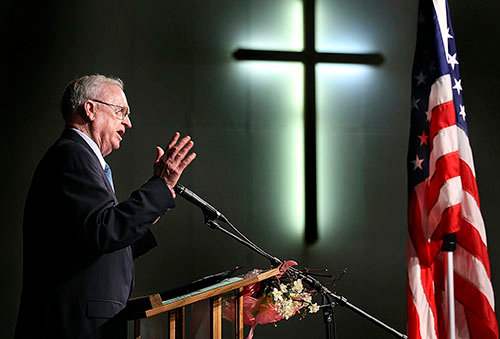 He maintained that character throughout his military career where he later commanded two ships and became the Navy/Marine liaison to Congress.

That character helped his family when a grandson died last December from an addiction. Another grandson, Michael, was having a difficult time with his brother's death. So his grandfather spoke to him from a well of faith and life experience.

Despite the horrific POW ordeal in North Vietnam, McDaniel harbors no hate.

"I have no hatred for the North Vietnamese," the decorated veteran said. "It's their system of communism that makes them what they are."

McDaniel and his wife now live in Alexandria near their children and grandchildren. They continue to tell the story of their separation during the Vietnam War, asking the question, "Where is God in our difficulties?"

This story originally appeared at bpnews.net. This article includes resources from Scars and Stripes, McDaniel's memoir of this POW experience, and After the Hero's Welcome by Dorothy McDaniel, which chronicles how she and their three children coped with her husband's imprisonment and return home.