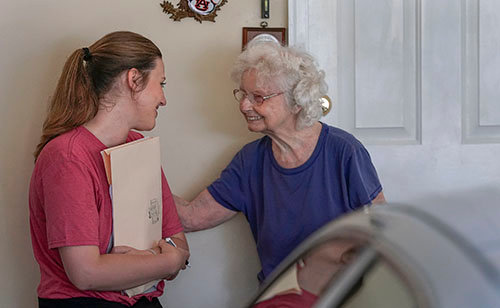 Jacksonville State University student Lexie Tisdale, left, talks with a 90-year-old resident of Chalkville during the door-to-door outreach of the Southern Baptist Convention's Crossover event in Birmingham, Alabama. June 8. Tisdale had offered to carry groceries in for the woman after finding out her husband had suffered a stroke two weeks earlier. Tisdale was able to pray with her before leaving. BOB CAREY/BP

BIRMINGHAM, Ala. (BP) — An expected 400 teams of Southern Baptists took to the streets to pray with families and share the Gospel of Jesus Christ prior to the Southern Baptist Convention's annual meeting in Birmingham, Alabama.

What brings us together

Despite intermittent rain and threats of even worse weather June 8, Southern Baptists set out to knock on the doors of 20,000 homes in greater Birmingham in their annual Crossover outreach. They also provided free medical and dental care through a Send Relief mobile clinic set up at Birmingham's Sixth Avenue Baptist Church. 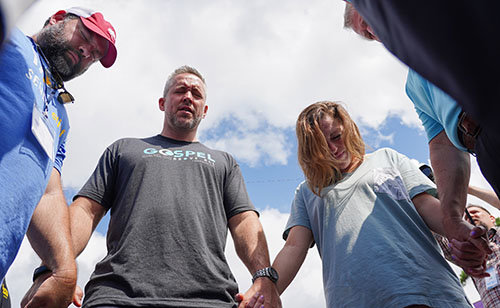 J.D. Greear, second from left, president of the Southern Baptist Convention and pastor of The Summit Church in Durham, North Carolina, prays with a group of volunteers at Sixth Avenue Baptist Church in Birmingham, Alabama before doing door-to-door evangelism in the neighborhood. The outreach was part of several evangelistic events across the city June 8 called Crossover 2019. HANNAH ANDERS/BP

"What brings us together is the mission," said J.D. Greear, president of the Southern Baptist Convention. "What excites us when we come together is to be able to proclaim with our mouths and with our deeds that Jesus Christ loves people, that He died to save sinners and He offers healing for all who will look to Him."

Crossover, Greear said, is an opportunity "to go through neighborhoods and tell people with our words and, in events like Send Relief we're able to demonstrate with our deeds that Jesus' love not only affects the soul but also touches the body."

Organizers tallying the day's numbers said volunteers knocked on the doors of 10,409 homes, had 1,817 gospel conversations, prayed with 2,251 people, and saw 364 people place their faith in Jesus.

Outreach teams dispersed from seven hub churches in different Birmingham-area Baptist associations. The teams started their morning with training by longtime evangelism trainer Bill Fay via video. The volunteers then divided into groups and went into the community each with the goal of visiting around 50 homes throughout the day.

Organizers tallying the day's numbers said volunteers knocked on the doors of 10,409 homes, had 1,817 gospel conversations, prayed with 2,251 people and saw 364 people place their faith in Jesus.

Southern Baptists prayed with the residents, distributed information on nearby Alabama Baptist churches, a New Testament, and a Gospel tract.

"The Bible commands us to witness," said John Woods, a Crossover volunteer from Poplar Springs Baptist Church in Ringgold, who visited homes near First Baptist Church in Pelham, Alabama. "So why am I doing it? God told me as a Christian that I need to go out and witness."

An opportunity to witness and train

Southern Baptist seminary students shared the Gospel in homes surrounding the seven hub churches during the week prior to Saturday's outreach. Alabama Baptist leaders saw the Crossover activities as an opportunity to not only saturate Birmingham with the Gospel but to train local churches in evangelism.

Dennis Blythe, executive pastor of The Church at Brook Hills in Birmingham, one of the hub churches for the initiative, said, "We'd like to not only see Gospel advancement and Gospel saturation in our community, but I hope God will do something in the lives of our own people to increase the urgency of having Gospel-witnessing presentations in our community."

God told me as a Christian that I need to go out and witness.

About 50 Southern Baptist volunteers at the site of the Send Relief mobile clinic at Sixth Avenue Baptist Church served the neighboring community by providing free dental care and medical screenings, along with childcare. They also shared the Gospel with neighbors as they waited. The demand was so high for the clinic's services that it extended hours to meet the needs and still couldn't see everyone who needed care.

"We can pull a tooth and take blood pressure, but when you're able to share the Gospel with everyone who comes through and people respond, that's what it's all about," said Chris Underwood, associate pastor of congregation care and missions at Highland Baptist Church in Florence, Alabama, who coordinated and recruited volunteers to serve at the mobile clinic.

Alabama Baptists and the North American Mission Board partnered together to coordinate and provide resources for this year's Crossover activities. 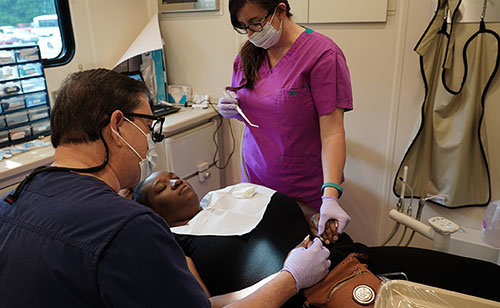 "I've been to all the sites this morning," Gilbreath said. "I'm absolutely amazed at the enthusiasm, the excitement, the passion, whether it's a seminary student, a college student, or a grandmother. It's been exciting, if nothing else, to see evangelism in conversation all over the Birmingham region."

Alabama Baptist leaders hope that the spiritual ramifications of Saturday's Crossover events will extend long beyond this weekend. Bill McCall, pastor of The Baptist Church at McAdory, in McCalla, Alabama, said the volunteers who helped his church engage his community were an answer to prayer.

Jesus spoke of the fields being white unto harvest and to pray for laborers, McCall said. "God sent us laborers to send out into the field. To not only see the people going out to share the Gospel door to door, but seeing the fruit of that labor and people coming to Christ, that's overwhelming. That makes our hearts so full, and it gives glory to God."

"What incredible commitment on the part of so many men and women that displayed so much tenacity to minister door to door all over Birmingham to make Christ known," said Johnny Hunt, NAMB's senior vice president of evangelism and leadership. "As we embrace and continue with this type of commitment, we can be assured of seeing numbers in baptisms reversed."

Tobin Perry writes for the North American Mission Board. Brandon Elrod contributed to this report.