Be a leader of conviction, Stone encourages legislators at prayer breakfast

Pastor Mike Stone of Emmanuel Baptist Church in Blackshear addresses legislators Feb. 27 on the 20th floor of the James "Sloppy" Floyd Building in Atlanta, across the street from the State Capitol, background. SCOTT BARKLEY/Index
Posted Monday, March 25, 2019 9:44 am
Scott Barkley

Pastor Mike Stone of Emmanuel Baptist Church in Blackshear addresses legislators Feb. 27 on the 20th floor of the James "Sloppy" Floyd Building in Atlanta, across the street from the State Capitol, background. SCOTT BARKLEY/Index

ATLANTA — Pressure doesn’t just reveal character. It reveals the character you may not have realized you had.

In addressing state lawmakers at the annual Legislative Prayer Breakfast hosted by Georgia Baptist Public Affairs Feb. 27, Blackshear pastor Mike Stone cited a familiar Bible passage dealing with public pressure to conform. The story of Shadrach, Meshack, and Abednego speaks to standing up in the face of an opposing culture, he said. And pointing to the King James Version’s account of the passage, Stone spoke on “The Desperate Need for Careless Leadership.”

In Daniel 3, King Nebuchadnezzar built an image all the people were commanded to bow down and worship at the sound of the trumpet. This, in turn, led to three of the captive Jews being brought to the king on charges of insubordination.

In response to Nebuchadnezzar’s question as to whether they had disobeyed the royal decree, Shadrach, Meshack, and Abednego said, “O King we are not careful to answer thee in this manner." Stone focused on the KJV wording chosen for the three's state of mind in the moment. 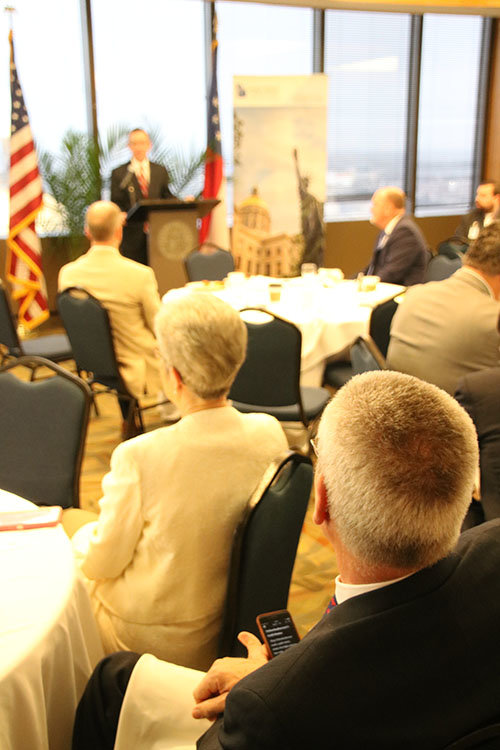 Senator Bill Heath (R-31) follows along on his Bible app as Mike Stone presents the devotion Feb. 27 at the Legislative Prayer Breakfast. Heath is a member of First Baptist Church in Bremen. SCOTT BARKLEY/Index

“When we think of the word ‘careful,’ we think of someone being wise,” Stone remarked. “Here, it means they didn’t care what the king thought. They’d already made up their mind on what they were going to do.”

American Christians have yet to experience a culture seen by the three Jews central to Daniel 3. However, in a warning to those gathered Stone addressed four “Ps” that signify sin’s acceptance in society.

But left unchecked, sin turns society from prohibition to permissiveness. “You go from ‘you cannot’ to ‘you may,” Stone said. “Leaders turn a blind eye to evil or actually seek to codify the right to do wrong.”

The third stage, he continued, was preference. “In this stage society actually prefers to promote and further the causes of evil rather than run the risk of calling right, right and wrong, wrong because they don’t want to be called narrow-minded.”

Left unchecked, he stated, the final stage is punishment. “You will either bend the knee to this new order or suffer the consequences … even from your own government.”

The compromise of believers

And while a governmental threat can happen, Stone cautioned on those who feel they cannot be swayed.

“There’s a pressure from within, in what I call the compromise of believers,” he said. "While scholars don’t know for sure just how many were taken captive by the Babylonians, in this instance Shadrach, Meshach, and Abednego stood alone.

“If you’ve ever been surprised by who stands and who bows, you’ll understand the pressure these boys were under. … If you’ve been [at the state Capitol] any amount of time, you know that there’s no practical difference between a Babylonian on his face in front of a golden statue and a Hebrew who claims to denounce that golden statue if in the end they’re all prostrated before the idol.

“They learned that Jewish boys and Babylonian boys all look the same with their heads down and their knees bent.”

There comes a moment of decision for everyone, he added. For legislators, that comes in pushing a button.

“How can you and I face life’s decisions without worry or stress? The only way to be carefree is to have already made up your mind.”