Organizers of legislative breakfast say it's not too late to register to hear Struecker and other speakers, but do it quickly because seating is limited 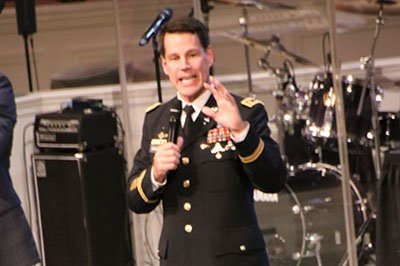 Jeff Struecker, pastor of Calvary Baptist Church in Columbus and former Army Ranger who was part of the "Black Hawk Down" operation in Somalia, will speak in Atlanta on Thursday. (Index photo)
Posted Monday, January 24, 2022 1:49 pm
By ROGER ALFORD, The Christian Index

ATLANTA, Ga. – Jeff Struecker has a powerful message about the importance of the gospel to share with pastors and government officials who will gather for a prayer breakfast at the state Capitol on Thursday.

“An ungodly people are ungovernable people,” he plans to tell attendees at the event sponsored by the Georgia Baptist Mission Board. “You can’t govern the ungodly. So, if there’s hope for the future, it’s going to be in the gospel, not in government.”

Struecker, the former Army Ranger whose role in the Battle of Mogadishu was chronicled in Black Hawk Down, said he plans to describe some of what he has seen in the most dangerous and deadly places in the world.

When he was 18, Struecker, now a member of the Ranger Hall of Fame, enlisted in the Army as an infantryman. He finished his service 22 years later as a chaplain. The heavily decorated soldier participated in the invasion of Panama, Operation Desert Storm, the Battle of Mogadishu, and more than a dozen combat tours in Afghanistan and Iraq.

Now pastor of 2 Cities Church in Columbus, Ga., Struecker holds a Ph.D. from Southeastern Baptist Theological Seminary where he serves as an adjunct professor.

So, when he addresses pastors and lawmakers about the importance of the gospel, he’ll do so based on his experiences as a Ranger, chaplain, pastor and professor.

Struecker said his goal is to impress upon pastors the importance of the role they play.

“The hope for the future of our country comes from the pulpit, not from a political party, and not from a government program,” he said. “I have seen first-hand the epic failures that come when people, including God’s people, have looked to the government instead of the gospel.”

The Georgia Baptist Mission Board combined the legislative prayer breakfast with the annual “Pastors Day at the Capitol” this year. Mike Griffin, the public affairs representative for the mission board, said that will likely mean an even larger crowd than usual.

The day begins with the prayer breakfast at 7:30 a.m.

Besides Struecker, several lawmakers, public-policy experts and Christian activists from across the nation will speak. They include Harrison Smith, regional director of Alliance Defending Freedom, former six-term U.S. Rep. Bob McEwen who now serves as executive director of the Council for National Policy, and Human Coalition Executive Director Dean Nelson who also serves as chairman of the Douglass Leadership Institute.

To register, go to gabaptist.org/event/pastorsday.