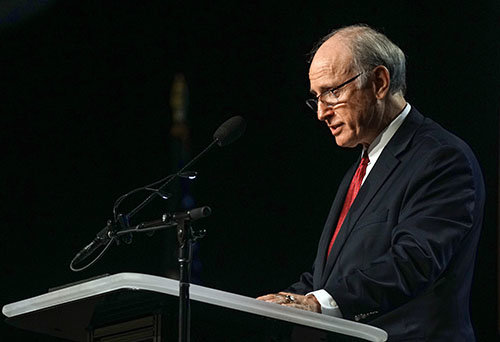 DALLAS, Texas — August (Augie) Boto was chosen to be the interim president of the Executive Committee of the Southern Baptist Convention two months ago upon the resignation of Frank Page. Boto, a wise, affable dedicated Christian attorney, gave an outstanding report at the Southern Baptist Convention meeting in Dallas in accordance with his role as the leader of the Executive Committee.

In recent weeks the Southern Baptist Convention has experienced some challenging circumstances that have caused a certain amount of unrest and uncertainty throughout its membership. Boto addressed the current situation with an analogy once stated by one of our Baptist heroes, Adrian Rogers.

Here is what Boto said, “This morning I referred to the Southern Baptist Convention as a very large ship – one that is certainly seaworthy and one that has all the amenities its passengers might wish for – a ship that is solid, a ship that is well constructed, but one that may turn more slowly than we might wish so that it can remain stable.

“Now let’s stick with that analogy. Adrian Rogers once said, ‘It is not good practice to convey any sense of a sinking ship, because when you do that nobody stays on it. Everybody jumps overboard.’ Well, the first thing I want you to know,” Boto observed, “is that the SBC is certainly not a sinking ship.

“It may be showing signs of age. It may even be in need of some repair. But the need for maintenance is a normal thing; and all in all down through the years our ship has been maintained fairly well.

“Some have wondered if perhaps our ship might be adrift. It seems to lack the power to forge through larger waves or proceed through seasonal storms. If it cannot do those things, it cannot reach its destination. It needs the power of God.”

Boto mentioned that our ship may be adrift and that we are no more than passengers on board enjoying the pleasures, the comfort, the safety, and the amenities offered – a ship that serves us well.  He indicated that we might have forgotten that the ship was once designed for hard work, a ship with no tourists and only a well-trained crew – a ship equipped not for pleasure, but for productivity, a ship that others need – desperately need.

The message delivered by Boto reminded me of another quote from Adrian Rogers who said, “The old ship of Zion was never meant to be a luxury cruiser or a showboat, but a battleship, a man-of-war for we have an adversary who wants to do us harm and sink our ship.”

Boto continued by extolling the giving record and numerical strength of the SBC as the largest evangelical body in America. He also spoke of the value of the local church, the many associations of Baptist churches throughout the nation, and the important role of state conventions.

“If you will excuse the analogy abuse, we cannot assess the health of the whole ship without looking at the state [convention’s] work or we will miss the boat.”

Boto showed a series of graphs indicating Cooperative Program giving. He then stated, “Here is a gauge that we have had a habit of focusing on – the gauge that shows the percentage the SBC has received from the states; and it shows that that gauge has been improving markedly – and misleadingly.

“What this chart shows is that at the national level our ministries were the beneficiaries of voluntary ministry sacrifices made by the states. ... We owe the state conventions a tremendous debt of gratitude for all they have done while still carrying on their work in church planting, evangelism, education, benevolence ministries, church health, mediation and revitalization, collegiate ministries, disaster relief, and a host of other missions initiatives in their respective states.

“We should certainly applaud and otherwise greatly honor the voluntary sacrifices of our state conventions.”

Boto then explained that the statistical information shows that in the last 18 years “our national receipts have improved by just over $17 million while our state ministry support has shrunk by over $41 million."

“I believe that we could take away that Southern Baptists are a sacrificial people – that we willing to try to do more with less. But I think that we also need to understand that while national ministries are being well funded, state ministries are not. Our total CP giving is not doing well at all.

“As I have been discussing with you how to read and better understand what I call the CP gauge I have said a whole lot about state conventions and their plight. Now why would I report anything about the trials of smaller conventions? Because, ladies and gentlemen, they are us! Their ministries are our ministries.

Boto quoted his friend, Hance Dilbeck, executive director of the Oklahoma Baptist Convention, who said, “The states send more than their money. They send their prayers and their people.”

Boto added, “Our domestic base must be supported. And much of that work is done most effectively at the state level. Dr. Ezell cannot lead NAMB to do all church planting. College campuses must have a strong evangelical presence. The vital work of children’s homes and elder residences must be sustained. Church revitalization must occur. And the most important work – evangelism – it must be abundantly provided for. We know that begins at the local level and is best resourced through statewide assistance and strategies."