JONESBORO – Breakout training sessions were one of the most notable components at last weekend’s GO Georgia in Jonesboro.

Sessions were offered in 18 categories during four time slots all over the campus of First Baptist Church in Jonesboro.

Speakers came from around Georgia – including some state missionaries – as well as Indiana, North Carolina, Missouri, Tennessee, Mississippi, Texas, and Alabama.

Awaken the leader in you 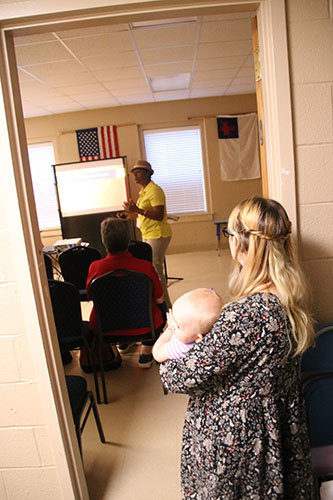 Amber Bowman watches a presentation by Monec Johnson, director of Thrive at First Baptist Woodstock, on the basics of special needs ministry while holding her daughter, 7-month-old Jaeladia. Bowman serves as a co-leader for the children's ministry at Journey Church in Griffin. SCOTT BARKLEY/Index

In this session, geared for female leaders, Linda Clark, adult field strategist for the National Women’s Missionary Union, encouraged women to not only develop the skills they need in their particular area of service, but to not ignore the “soft side” of leadership.

“We get embroiled [in the daily tasks] and we forget to be gentle. We set aside maybe using humor. Maybe our attitude is a little snarky that day. We don’t embody, we don’t work on, we’re not intentional about being the kind of female Christian leaders that we need to be to honor God,” Clark said.

She added, “Woe be to the female leader who missteps like that, because people have a long memory. We need to hold Christ’s banner high and be sure that we honor His name and that He’s glorified in what we do, how we behave, how we approach things.”

However, she reminded attendees that during the inevitable dark days of leadership, God’s promise in Isa. 41:10 stands and must be claimed.

Calling the Great Commission the “final command,” he highlighted its importance, being recorded by each Gospel author.

“Jesus was trying to drill home this one, final command, because if His disciples didn’t obey this one, everything He had done would have been in vain,” King noted. However, “The command is make disciples. Notice it does not say make decisions. Disciple-making guides people to be transformed in Christlikeness so they think and act like Christ.” 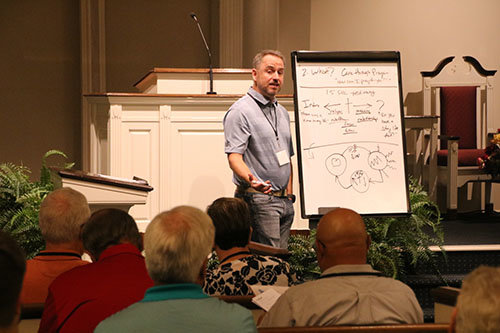 There are many different ways to be discipled, and King encouraged his audience to use any on the list but the last. They include: a master teacher, small groups, one-to-one, through books/audio/video, and just being discipled very little.

One big hindrance in disciple-making is when foundational issues exist. Much like the Leaning Tower of Pisa, when there are outward symptoms something is off – lack of obedience, apathy, idols of the heart – it’s probably due to there being an issue with the love relationship the believer shares with the Father.

Rev. 2:4-5 teaches the way to fix that foundation and therefore the symptoms, and that is to “remember from where you have fallen.”

“If we’re going to make disciples who obey the commands of the Lord, we’ve got to help them return to a love for the Lord where they want to obey him,” King instructed.

Rick Jenkins, campus minister at Columbus State University, spoke to parents who have recently or are on the brink of sending their students to college, or as he called it – out into the world of “adulting.” 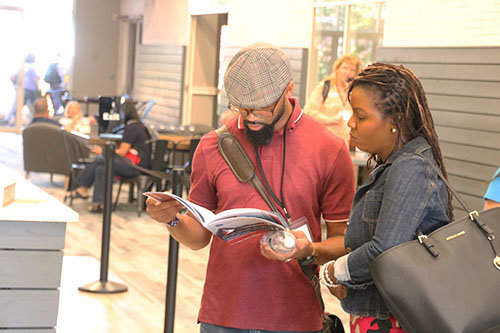 Anthony Green, Jr. and Aisha Jackson, both of Bethesda Empowerment International Church in Marietta, look through the list of breakout sessions of GO Georgia held Aug. 16-17 at First Baptist Church in Jonesboro. The two ended up choosing a session on special needs ministry, an area in which they volunteer at their church. SCOTT BARKLEY/Index

He gave a list of “10 things parent of a college freshman need to know.” These include knowing where their student lives at school; the importance of a campus ministry connection; that students change their major 3-4 times (and that’s okay); and that the first semester is one of the most significant times of change in a student’s life.

With that knowledge foundation, parents should encourage their kids to do the following: go to class; understand that doubts about faith and God are normal and can be a springboard for growth; connect with a college ministry and church ASAP; and don’t give up when they mess up.

“Love your kids. Hug them. And help them become adults,” he told parents.

While GO Georgia-Statesboro starts tomorrow and the first Breakout Training Session is at 3:15 p.m., Jonesboro largely featured different sessions. All will be made available online. A recap of the first two main sessions speakers – who will be the same at both locations – can be read here (Mark Croston) and here (Jamie Dew).