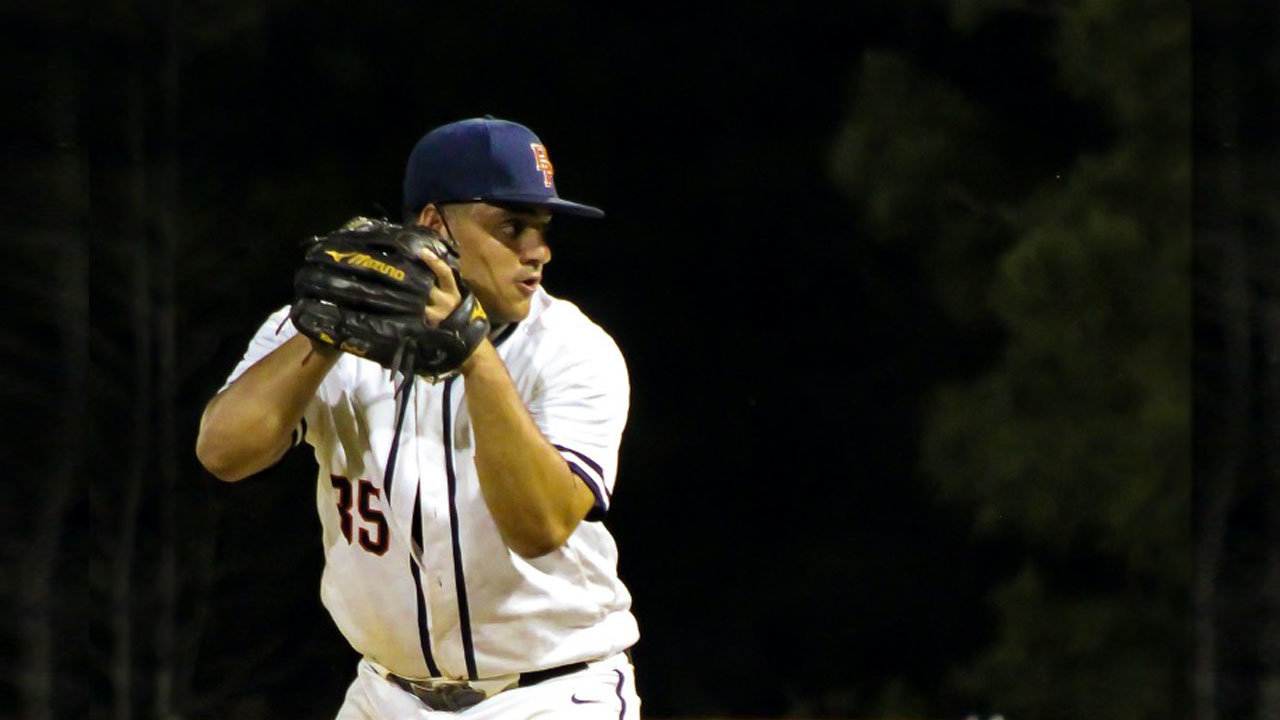 Michael "Mikey" Anderson pitches during a home game for the BPC Barons. BPC/Special

MOUNT VERNON — “Nice guys finish last” is attributed to Brooklyn Dodgers baseball team manager Leo Durocher in 1946. However, the story of Mikey Anderson’s time at Brewton-Parker College is one that proves nice guys can finish much higher than last with determination, finding the right support system, setting goals, and meeting those goals.

Anderson signed as a pitcher with the BPC baseball team in 2016. During his signing, Anderson stated he chose BPC because, “Brewton-Parker just feels like a good academic fit for me.” After arriving at BPC, Anderson found success on the baseball field, but was not prepared for the academic rigors of the college classroom.

One of those supporters was Beverly Robinson, associate vice president for Student Responsibility & Success. Robinson noted that when Anderson first arrived at BPC, he seemed to have some uncertainty about his drive and performance as a first-year college student. “He had no concept of his abilities to succeed,” she explained, “but he had the desire to succeed.”

That desire drove Anderson to work diligently with Robinson to make sure he was learning how to study, set goals, and develop his confidence. They often discussed his strengths and weaknesses and set academic goals. Anderson readily agreed to focus his attention on his academic success and visit the academic success center frequently. When Anderson achieved a goal, he and Robinson would celebrate these victories, no matter how small they might have been.

Robinson has a term for students like Anderson, calling them “Athletic Scholars.” An athletic scholar, as defined by Robinson, is “an athlete who not only does well and is committed to their sport, but they are equally as committed and do well academically with a clear plan to reach their goals.” Robinson worked with Anderson to help him develop a plan to achieve his goals and provided the encouragement needed to meet them.

Anderson also developed a strong friendship with his mentor, Joe Filippone. Filippone is the executive director of the Montgomery County Development Authority and has a knack for helping students who need support on their life’s journeys. He provides guidance and advice, looks over resumes, and practices job interviews with students as his way to give back. Filippone is also an active fan of BPC’s baseball team and attends most practices and games.

When Filippone met Anderson in the BPC cafeteria at the beginning of Anderson’s freshman year, Filippone’s first impression was of Anderson’s potential with the proper support channels he needed. When Filippone saw his wife after meeting Anderson for the first time, he promptly explained, “I met the nicest young kid today, a really nice kid.” Filippone noted Anderson would need support, encouragement, and to work diligently to succeed at BPC.

Not wanting to give up on Anderson, Filippone coached him to set attainable goals and encouraged him to work at improving his reading and speaking skills. As Anderson reached each goal, his confidence and ability to reach more challenging goals improved, leading him to achieve his academic goals in the classroom and graduate with a Bachelor of Arts in Psychology in 2020.

Filippone stated that “ is the perfect example of what you can do if you apply yourself and work at it.”

Not only did Anderson apply himself in the classroom, but he also showed growth and leadership on the baseball field. During one of the practices, Filippone observed one of the players struggling to complete a drill. Anderson went over to his teammate to help him get back on his feet and provided positive encouragement while they completed the drill together. Filippone also observed the teammates gravitate towards Anderson.

Anderson’s dedication and determination often surprised his mentors as he worked toward finishing his degree. The biggest surprise for Filippone was when he received a call from the young ballpalyer stating that he was planning to continue his studies in Psychology and attend graduate school. Filippone shared that this news brought a tear to his eye and stated, “Anderson is a beautiful success story.”

Anderson benefited from his mentor and the support system at BPC, achieving success through the work to reach his goals. As a result he became successful in the classroom and graduated in four years. He plans to attend graduate school to continue his studies in Psychology.

Obstacles can be overcome with the right tools and support, and Anderson has proven that nice guys do not always finish last.