Brewton-Parker College students gather for prayer during revival services. The four-day event was held in Saliba Chapel on the school's campus in Mount Vernon. MANDY CORBIN/BP

The event, immediately leading up to Good Friday and Easter Sunday, was lead by Larry Wynn, vice president of church revitalization and evangelism for the Georgia Baptist Mission Board.

Wynn began his sermon by asking, “Where are you on your spiritual journey?” He continued by asking if the congregation was far down the road, just getting on the road, or still deciding if that's the path they wanted to take on their journey. He continued by sharing Acts 2:41 and used a baseball analogy to share four vital bases that need to be covered on their journey.

The first base he shared was moving from religion to a relationship with Christ. The second base was being unashamed and following Christ in baptism, as he emphasized that the bases must be covered in order. Third, he said after baptism, it was necessary to fellowship with other believers by being active in a church. Lastly, he stated home plate was bringing others to Christ and continuing the game. 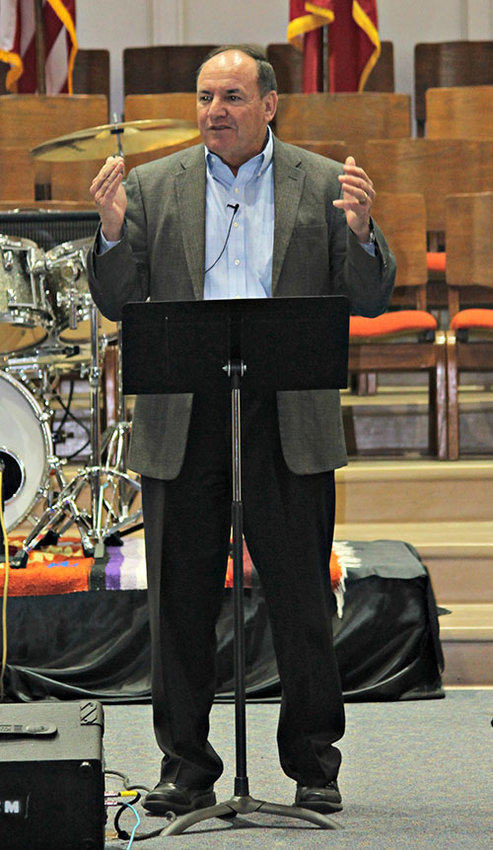 On Tuesday Wynn spoke from Matthew 19, telling the story of the rich young ruler who wouldn’t give up worldly possessions and put God first in his life. He explained that in order to be a true disciple one must surrender everything to God. Referring to verses 21-22 he said, “Jesus told him ‘If you want to be perfect go, sell your belongings and give to the poor, and you will have treasure in heaven. Then come, follow me. When the young man heard that command, he went away grieving, because he had many possessions.’”

In closing he asked the congregation, “What’s standing between you and God.”

Wynn also spoke from the book of Matthew for the Wednesday morning chapel service. The theme of his message was “Communicating with God through prayer.” His message came from the fourteenth chapter with emphasis on verse 27: “Immediately Jesus spoke to them, ‘Have courage. It is I. Don’t be afraid.’”

He went on to explain how during the storm Jesus was there to pick Peter up as he fell walking across the water. “Jesus loves you and I so much that when we fail, he will pick us up,” Wynn stated.

According to him, there were four things his listeners needed to know about storms: they are unexpected, they are universal, they cloud one’s perspective, and they bring individuals to the one who can calm the storm. In closing, he stated “He will come to you and He will always care.”

Knowing the will of God

Wynn’s final sermon on Thursday was “Knowing the will of God.” He started by telling his listeners, “If you don’t know what direction you’re supposed to be going, ask God.” He then gave the audience several factors that determine the will of God in one’s life: desiring His will, humility, obedience, experiences, His word, and His people.

He closed by saying, “Ask Him with and open heart and mind, God what do you want?”

More revival photos can be found at www.facebook.com/brewtonparker.

Brewton-Parker College is the only accredited four-year Christian college south of Macon and north of Jacksonville, FL. The mission of Brewton-Parker College, a Georgia Baptist college, is to develop the whole student through the application of Biblically-centered truth to a liberal arts curriculum in a community of shared Christian values.

Mandy Corbin is director of marketing for Brewton-Parker College.