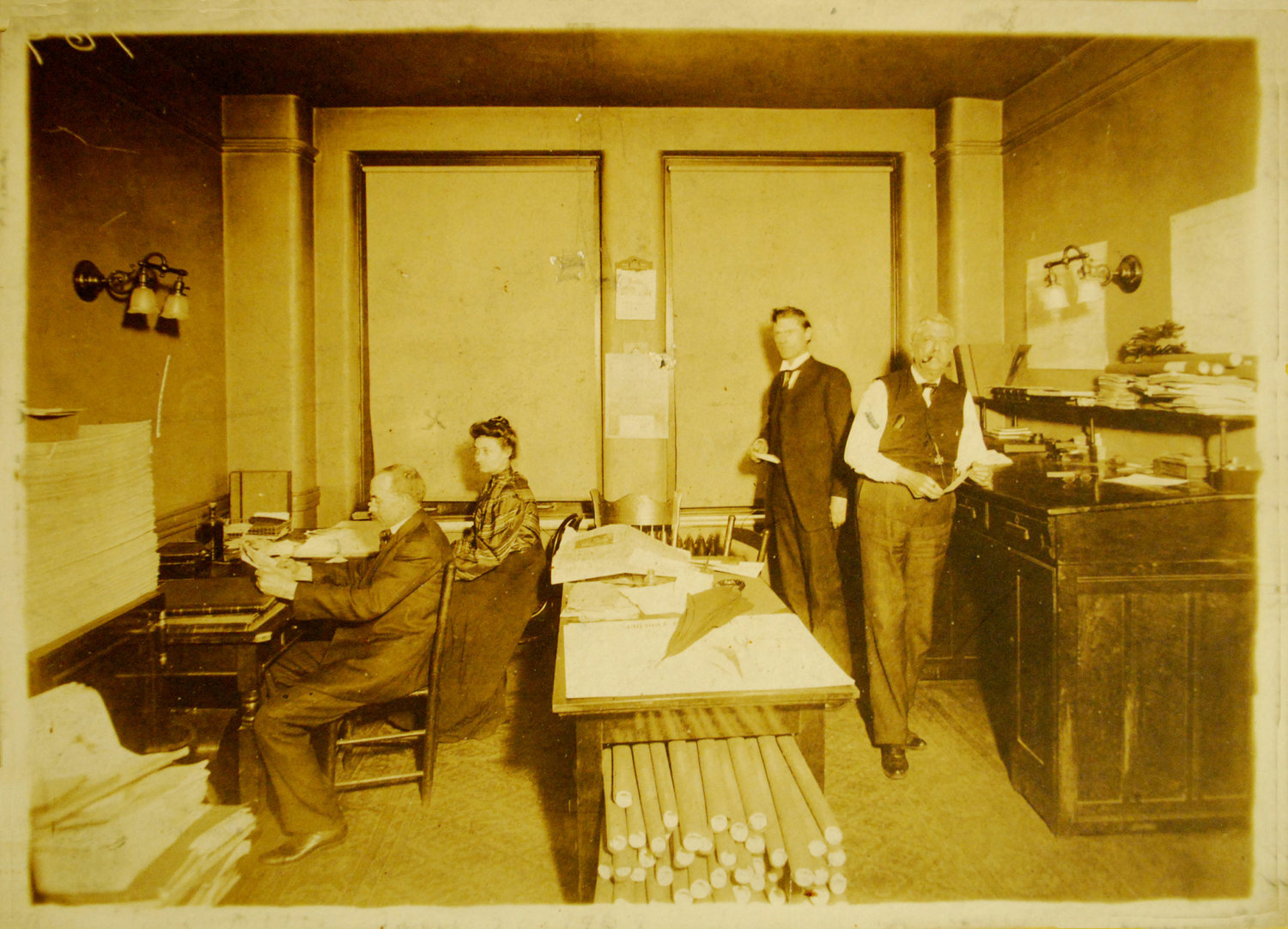 In this photo from the the Georgia Baptist State Mission Board Office in 1909, H.R. Bernard is on the far right.

Business is business even the Lord’s business. -- H.R. Bernard

It can be said that the Cooperative Program is the child of many parents. One of the most significant and yet overlooked was born in Wilson County, Tennessee in 1843. He was born again twenty years later at a Civil War Camp meeting in Dalton, Georgia in the winter of 1863-1864. A few months later his life almost ended at the battle of Resaca. Sent to a hospital in Oglethorpe County, Georgia to recuperate his life took another detour. Young ladies from nearby Athens came to visit the recuperating soldiers and he fell in love with one of them Miss Mary Weatherly.

Hugh Robertson Bernard moved to Athens following the war, married Mary and they began their lives together. They shared a love that sustained them for nearly 50 years.

In 1877, Dr. P. H. Mell, who was President at the time of both the GBC and SBC, became the Chancellor of the University of Georgia. Mell pastored of several rural churches and recommended Bernard to one of them when he resigned because of University demands. Bernard was ordained and began pastoring while continuing with the railroad.  In 1891, while a bi-vocational pastor of four rural churches, he applied his business experience to mission giving and promotion. The first major contribution towards development of the Cooperative Program. 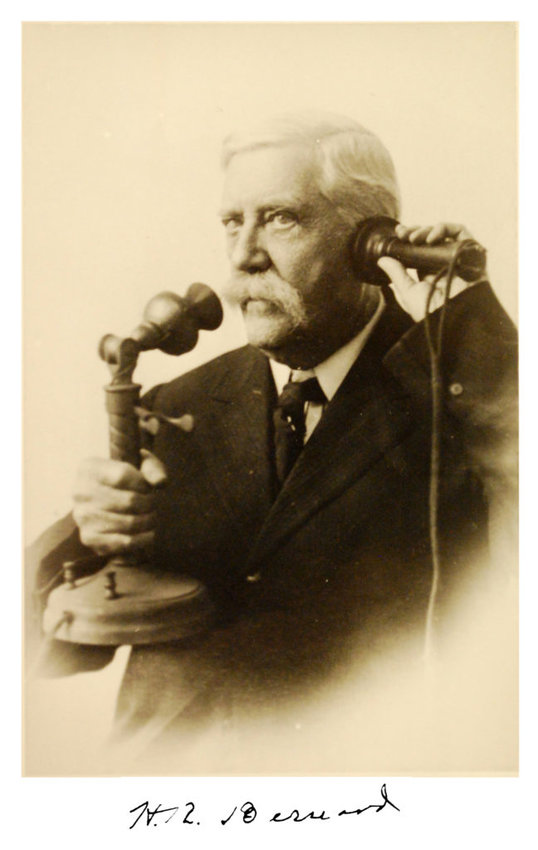 At that time missions and education were funded by annual offerings, taken on a designated Sunday and funds raised by “agents.” “Agents” were fundraisers who generally kept a percentage of what they raised. Each school, ministry, or mission board (State, Home, Foreign) were competing for mission offerings.

Ministries based their budgets on the previous year’s income and often borrowed funds to operate ministry shortfalls until their annual offerings were received. Unfortunately, any number of factors from poor weather across the state on the Sunday scheduled for a special offering, crop failures or individuals choosing to support one ministry more from one year to the next created budget shortfalls. Consequently, ministries began to accumulate debt and rolled that debt into successive years when giving was down, creating large debts overtime.

Bernard, the railroad superintendent, literally said, “That’s no way to run a railroad!” His solution was to create a “schedule” to keep things on track. He understood the importance of a dependable, year-round stream of income (giving) to keep ministries out of debt. It was called “The Schedule Plan” which he introduced to his four rural churches in 1891.

The Schedule was based on a percentage-based break down reflecting the ministries in the Georgia Baptist Convention budget. At the time this included: State, Home and Foreign Missions, Mercer University, the Orphanage, “Ministerial Education” and “The Indigent Ministers Fund.” Each month a missions offering was taken by his churches and sent to the State Mission Board which distributed them based on the percentage to each ministry through the State Mission Board.

Several years later John G. Gibson, second Corresponding Secretary of the State Mission Board, and an old friend of Bernard’s from the Sarepta Baptist Association, helped promote the adoption of this plan by the Georgia Baptist Convention. The Schedule Plan may have been the first unified, percentage-based approach to mission giving across the SBC. It represented a holistic approach to mission giving and introduced the concept of cooperative stewardship. At least one other state Convention, Oklahoma began using the model of the Schedule to promote mission giving.

The second significant innovation toward the development of the Cooperative Program took place in 1898. Bernard made a motion at the GBC for the creation of a “Committee on Cooperation.” At this time schools and agencies depended upon an annual offering, but as needs arose, they would often introduce an “emergency appeal” for projects. The scheduling of offerings at times conflicted with other ministries offerings resulting in giving shortfalls and ill will. Furthermore, churches were growing weary of being bombarded with constant and sometimes conflicting appeals.

The Committee on Cooperation managed the promotion of “The Schedule Plan” and the scheduling and flow of other missions funding appeals. The significance of this committee for the development of the Cooperative Program was bringing the ministries fund raising under one centralized committee resulting in the schools, boards and agencies beginning to communicate and work together instead of competing.

In his later years Bernard made one final but significant contribution to the development of the Cooperative Program. In 1914 due to several factors the Georgia Baptist State Mission Board was facing a crisis of confidence. Ministries of the Convention were dealing with runaway debt. This resulted in Corresponding Secretary J.J. Bennett (Executive Director) developing a major health crisis and resigning. H.R. Bernard for 17 critical months served as the interim Corresponding Secretary.

Steps were taken to restore confidence in operations of the Board. Emergency measures were enacted to reign in ministry boards who had been creating unauthorized debts. Bernard then helped develop a unified debt retirement campaign called “The Half Million Campaign” (1916-1918). The collective debts of the schools, boards and agencies were included in this campaign. All agreed not to create additional debt and they would stop other fund raising to support the larger effort. This successful campaign became the working model for the “75 Million Campaign” (1919-1924) which in turn was the model for the Cooperative Program (1925).

Bernard developed the Schedule Plan, a unified percentage-based offering to support missions in 1891. He proposed and chaired the Committee on Cooperation in 1898 which facilitated a cooperative instead of a competitive attitude for mission agencies and schools. He was instrumental in developing Georgia’s successful “Half Million Campaign” (1916-1918) to eliminate unmanageable debts and restore confidence in the financial operations of the Georgia Baptist State Mission Board. In so doing created the model for the Cooperative Program.

Getting Baptists to change has never been easy or without opposition. One biographer wrote of Bernard, “He has sometimes been misunderstood . . . but, that he has been permitted to see the fruition of more than one important program in our Baptist life for which he contended when he stood almost alone and faced the active opposition of many.” He persevered and Baptists are the better for his work.

Hugh Bernard was a Baptist Statesman whose passion was helping Baptist rise above the competitive, uncoordinated, and often haphazard approach to mission funding to a coordinated, unified, and cooperative model. Unfortunately, Bernard did not live to see all the fruits of his labor. He died in 1916 six weeks after the death of his beloved wife Mary. Yet he left behind the legacy of being one of the unsung heroes, even a father as it were, of the Cooperative Program.

Christian Index amassed readers from 187 countries over past month