Kaytlyn Malia from Macon uses her art skills to refresh a banner at Camp Pinnacle. The Macon native enjoys the fellowship and service aspect of the Camp Pinnacle Alumni Association. JOE WESTBURY/Index
CLAYTON — Kaytlyn Malia spent a week each for two summers at Camp Pinnacle because her parents financially invested in her spiritual future. Then she returned for five summers as a staffer, mentoring young girls and earning a little money for her college years.

Kaytlyn Malia
Now she has returned as a volunteer and works for free as a gesture of appreciation and of paying the ministry back for its role in shaping her into a godly woman. Malia is one of about 30 former staffers who have joined the Camp Pinnacle Alumni Association since it was launched in 2013. And as word spreads about the fellowship, its numbers continue to grow. “As a camper I felt like this was a place where the Spirit dwells, where God calls people to serve or into a deeper walk with Him,” the Macon resident explains.

Tabitha Ferrell
She says she is grateful for the GAs program at Tom’s Creek Baptist Church, which introduced her to the camp owned and operated by Georgia Baptist Woman’s Missionary Union. The camp sets itself apart from other Christian summer facilities with its unique emphasis on Southern Baptist missions and the opportunity to spend the week learning from and being mentored by missionaries.

Learning to live the Great Commission 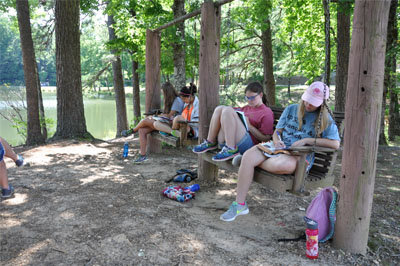 Members of the Camp Pinnacle Alumni Association remember how time set aside for personal reflection and Bible study made helped them build spiritual discipline which they use years later. This group of girls enjoy their quiet time by the camp lake in late June. Pictured, closest to the camera in pink are Madison Grubbs from Midway West Baptist Church in Carrollton, and wearing blue, Stephanie Cannon from Crossroads Baptist Church in Newnan. JOE WESTBURY/Index
“At Pinnacle we learn to live the Great Commission, both as campers and as staff. A week at camp can really make an eternal difference in a young girls’ life,” she says. Malia says the camp, located just outside of this north Georgia town at the foot of Mount Pinnacle, “is a refreshing, renewing place to spend your week or your summer. It has such an incredible legacy … Georgia Woman’s Missionary Union and the Georgia Baptist Mission Board have prayed over it for years and created a legacy you can sense just by walking across the campus.” She has no problem quickly responding about why she joined the Alumni Association. “My time as a staffer was over, I had served five years, but I just wasn’t ready to let it not be a part of my life. I wanted to stay involved with what is going on and with what God is doing here,” she explains. Tabitha Ferrell, Georgia Baptist Mission Board state missionary who serves as camp director through the Woman’s Missionary Union, says the Alumni Association has become a popular way to stay in touch with the retreat center.

“We love having the continued support of former staffers and want them to be involved on what is happening here. This is an important way for them to remain in touch and to became a part of the Camp Pinnacle legacy," Ferrell notes. 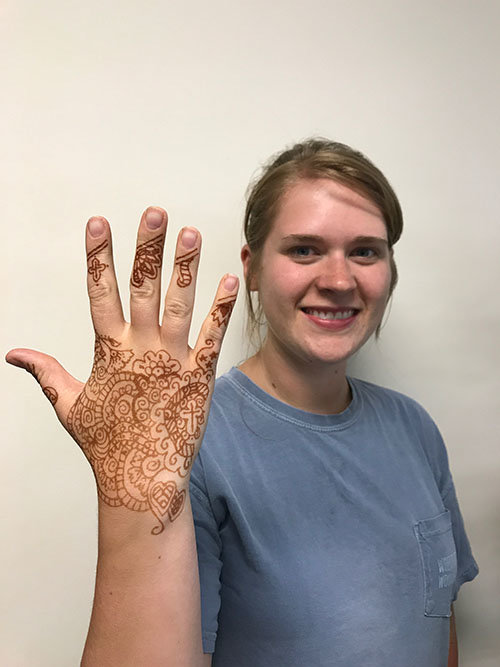 LeAnna Daniel, a member of the Camp Pinnacle Alumni Association, displays a henna tattoo that tells the biblical story from creation to the resurrection. The temporary tattoo is part of this summer's culture camp element of learning about international missions. JOE WESTBURY/Index
Many members do just that through the private Facebook page, where they stay in touch with each other and learn about upcoming ministry opportunities tailored to their interests and skills. “Plus, it takes a village to run a camp,” Ferrell says with a laugh. Former staffer LeAnna Daniel, from Rome, was one of the first staffers to join the Alumni Association. As a young girl she attended a decade of summers at Pinnacle and eventually served three summers as a staffer. “Camp Pinnacle invested so much in my young life … I even got married in the chapel,” she says with a generous smile. “I just felt like it was time to give something back.” Alumni volunteers provide a variety of services, Ferrell adds. Services like operating the gift shop, sorting T-shirts, inventorying camp supplies, and working with "camptivities" like archery or kayaking. Former staffers can receive more information about the Alumni Association by visiting the camp’s website at camppinnacle.net. Annual dues of $50 include a $25 donation to camp scholarships (“Many of our campers are on scholarship,” Ferrell notes) with the balance going to special projects. 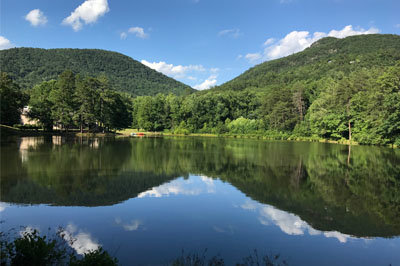 Camp Pinnacle, owned by Georgia Baptist Woman's Missionary Union, is located outside Clayton near the North Carolina border. JOE WESTBURY/Index
For example, the camp was able to provide specially printed T-shirts for campers to reinforce a specific theme. Pinnacle opened its doors in 1947 and will celebrate its 70th anniversary on Sept. 16. By the time camp ends the week of July 10, more than 700 campers will have passed through its doors via its 7-week programs. The camp serves young girls from 5-12th grade and introduces campers to personal interaction and cultural experiences with Southern Baptist missionaries from the North American and International Mission boards. Campers also learn about the role the Cooperative Program plays in providing missionary support around the world.