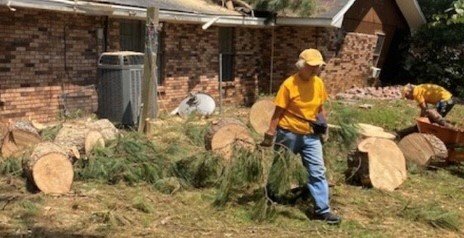 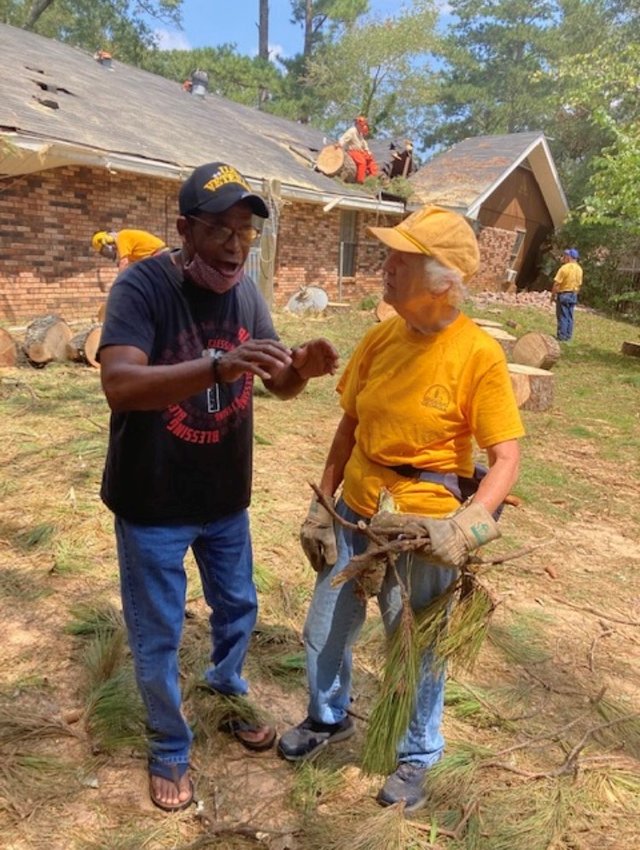 Nancy Hubbard of Fayetteville, Ga., right, chats with Arzo Grayson Jr. whose home was damaged by a tree toppled by Hurricane Ida in Kentwood, La.

KENTWOOD, La. – Nancy Hubbard has never been one to let age slow her down.

At 82 years old, the Georgia woman is in Louisiana helping victims of Hurricane Ida get back on their feet.

“There are people who retire and just sit down to die, and that really disturbs me,” said Hubbard, a member of a Georgia Baptist Disaster Relief chainsaw brigade that’s cutting fallen trees off homes and out of yards. “God didn’t put us here to sit on our backsides. He wants us up and going. He wants us to live. And I’m going to live as long as I’m alive.”

Hubbard has been working with Georgia Baptist Disaster Relief since she retired from the Federal Aviation Administration two decades ago. Her first deployment was to New York City after the 9/11 attacks in 2001.

Since then, she has been in disaster areas all over the country, including in New Orleans in 2005 when she helped residents clean up after Hurricane Katrina.

Jeff Carter, the Disaster Relief volunteer supervisor on Hubbard’s detail, said she isn’t the only senior citizen involved in crisis ministry. In fact, he said, most people who work in the ministry are in their mid-60s to early 80s.

“They’re a part of that greatest generation, and they just keep on and on,” said Carter, a member of Victory Baptist Church in Rockmart, Ga. “They don’t let as many things be a hinderance to them. They’re retired, and they’re able to pick up and go.”

In her baggy jeans and the trademark yellow T-shirt and cap of Baptist Disaster Relief workers, Hubbard has been going from home to home in Kentwood with a small team of volunteers removing fallen trees. While other relief organizations were still preparing to help, the Georgia Baptists were already on the ground with feeding, laundry and shower units set up at Kentwood’s storm-damaged First Baptist Church. Winds snaped the steeple from the top of the church. It’s now lying across the street.

Hubbard, a member of First Baptist Church in Fayetteville, Ga., takes her volunteer work seriously. She keeps herself in shape for deployments, working out five days a week.

She said helping disaster victims has kept her occupied since her husband, Bill, died. Her two grown sons, Scott and David, marvel as their mother’s stamina.

“They kind of understand me,” she said. “They just kind of accept what I do. I think they think I’m a little nuts.”

The kind of crisis ministry Hubbard provides allows her to offer hope and healing to hurting people. Anyone who thinks this ministry is easy has never been around Baptist Disaster Relief volunteers. The work is backbreaking. Sometimes they’re called out in the coldest days of winter when an ice storm has struck a town or region. Sometimes they’re called out on the hottest day of summer, like this week in Louisiana when Hubbard had sweat dripping even from her earlobes as she dragged away branches from a huge trees knocked down by Hurricane Ida.

Hubbard’s snowy white hair would become wet beneath her yellow cap, but she keep on working.

In New York City after 9/11, Hubbard worked hard all day, every day helping remove dust generated by the explosions from nearby apartments. At night, she slept in a naval prison that had few amenities other than metal beds to sleep on.

“For me, I think 9/11 was the worst,” she said. “I still have a hard time with that one. It’s just hard to believe people could hate you so much that they’d do that. It’s just so sad, so senseless.”

Carter said Hubbard definitely isn’t the kind of lady who worries about chipping a nail. “She’s a super hard worker,” he said.

And Hubbard has no plans to slow down.