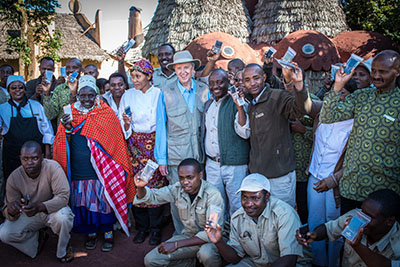 First Baptist Atlanta Pastor Charles Stanley gives Messengers to the entire staff of a small lodge in the Serengeti, Tanzania. IN TOUCH/Special

ATLANTA —Many positive things can be said of Dr. Charles Stanley. One of them is no one can dispute he is a man of faith and vision. Few people have had the impact upon the world for good and for God like the pastor of Atlanta’s First Baptist Church and the founder and president of In Touch Ministries.

When Stanley launched “The Chapel Hour” in 1972 on Atlanta-area television stations he probably never dreamed that 45 years later his ministry would become so expansive that it would cover most of the earth.

“In Touch with Dr. Charles Stanley” programs are seen and heard around the world on more than 2,800 radio and televisions outlets. And, through the means of modern technology and communication, Stanley’s messages can be heard on every continent in 150 countries. His sermons have been translated into 114 different languages and counting. 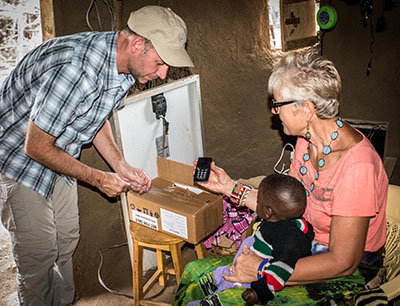 Brad Brown, chief information officer for In Touch Ministries, givies Messengers to a missionary living in a mud hut in Africa. IN TOUCH/Special

The most exciting time in history

In his book Courageous Faith, Stanley explains, “We are now closer than ever to getting His Word out to all people. With the Bible in more languages and with technological improvements, God has enabled us to reach even the most secluded tribes on the planet.

“I believe we are living in the most exciting time in history, able to tell so many people in so many different countries about Jesus. Platforms for communication that no one dreamed possible when I was a boy are now everyday tools for taking the Gospel around the world.”

One of the communication devices Stanley was referring to is the pocket-sized Messenger, In Touch Ministries’ flagship solar-powered audio device that holds up to 65 of Stanley’s sermons, the New Testament, Psalms, and Proverbs in a variety of languages. The Messenger can hold content in two languages at a time. There are actually eight different devices in the Messenger Lab family, each one designed to meet the needs of specific people groups who have their own communication challenges. 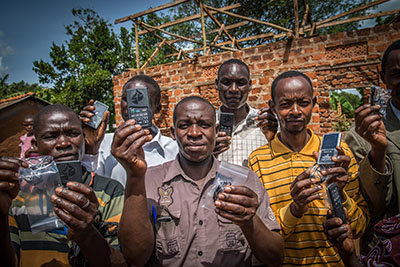 Pastors hold up their Messengers after a distribution in a small village outside of Jinja, Uganda. IN TOUCH/Special

(At the end of this article you will be able to read a sidebar description of the specifics of each of the seven devices, like the Messenger and the uniqueness of each one).

Distribution of the solar-powered audio devices

To date In Touch has given out more than 750,000 of these remarkable solar-powered audio devices valued at a total of more than $26 million. In Touch does not sell the devices, but gives them away as a part of their worldwide ministry.

Since the shelf life of each device is long-lasting and each device must pass certain stress tests to insure durability they can be used for years and impact many lives. Some of the devices are used to communicate the Gospel to house churches and Bible study groups. So, one device could potentially touch the lives of hundreds, if not thousands, of people. 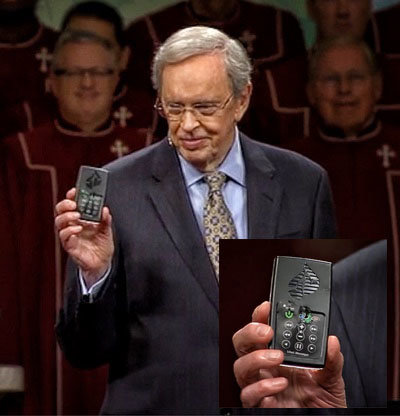 At the August 28, 2016 service at First Baptist Atlanta, Charles Stanley shared the story of how an In Touch Messenger, inset, stopped a bullet from killing a Ukrainian soldier. IN TOUCH/Special

Saved from a bullet by the Messenger

Many soldiers in the Ukrainian army were given Messengers, which they put in their uniform shirt pockets. In one battle one of those soldiers was shot and the bullet hit him in his chest where the Messenger was in his pocket. The device saved his life.

The soldier was apparently only momentarily dismayed by being shot, but devastated that the bullet had disabled his Messenger. He sent the damaged Messenger to the offices at In Touch in Atlanta and requested one that was operational and would allow him to hear Dr. Stanley’s messages.

Stanley was sharing the story of that Ukrainian soldier, held up the Messenger that stopped the bullet, and exclaimed, “The device will save your life; but the message will save your soul.”

In 2014 when pro-Russian separatists were fighting Ukrainian forces in eastern Ukraine a Russian soldier got a Messenger off of a dead Ukrainian soldier. After listening to Dr. Stanley’s messages on the Messenger the Russian soldier accepted Christ as his Savior and decided to go to a Ukrainian church.

He walked in with his military uniform on and weapon in hand, but sat down and listened to the sermon. After the service ended the congregants invited him back for the following Sunday but urged him to not wear his Russian military uniform or bring his weapon. Those made people anxious and uneasy. 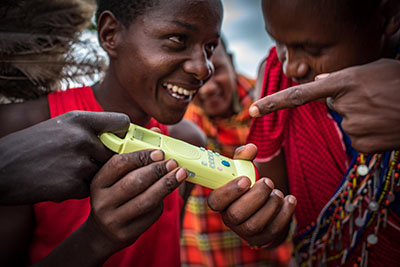 Members of the Masai Tribe in Southern Kenya react to their first encounter with the Torch provided by In Touch Ministries. IN TOUCH/Special

From the Pygmies of Africa to prisons of El Salvador

Brad Brown, chief information officer for In Touch Ministries, stated, “The missionaries we work with have been able to take the Messenger into the rainforest of the Congo to the Pygmies. These people are among the poorest of the poor, but are as deserving of the Gospel as anyone. We love getting the message of redemption to people who couldn’t get it any other way.”

Brown continued, “One of our Messenger Lab devices is called the LightStream, which we’ve put on water towers in Africa and South America. People within the vicinity of that tower can pick up the messages from this device on their cellphone Bluetooth or Wi-Fi and download Dr. Stanley’s sermons and the Bible.

“We also plant the Lightstream outside refugee camps so that those inside the camps can get the good news of the Gospel. 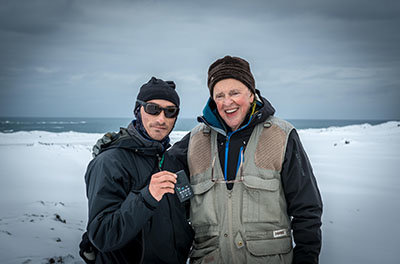 A worker at a Russian Ice Station in Antarctica pauses in -20 weather to hold up the Messenger presented by Charles Stanley. IN TOUCH/Special

“We also have Southern Baptist International Board Missionaries in countries where there are significant restrictions on preaching the Gospel. They are able to distribute the Messenger where large groups of people gather to listen to the Word of God.

“There is a blind man in Budapest, Hungary,” Brown explained, “who gives out Messengers to other blind people. Those who can’t see can hear. And those who can’t read, can also hear.

“We have missionaries in Norway, Turkey, Africa, the Middle East, Southeast Asia – all over the world,” Brown declared, “who are delivering the Messenger to people who would never be able to hear the Gospel otherwise. We even have access to prisons in El Salvador. We have distributed the Messenger to every continent on earth, including Antarctica.”

A teaching partner with In Touch

Bill Loveless is spending his retirement years in ministry as a teaching partner with In Touch. In 2016 Loveless went to South Sudan to distribute some Slates (electronic tablets with Messenger content and pastor resources) in a small village at the base of the Lopit Mountains.

Loveless reported, “When I was praying about the trip, my friends kept telling me, ‘It’s dangerous over there.’ But God took me to Psalm 31, which is a beautiful Psalm on God’s protection, and I felt like He was saying, ‘I’ve got your back. Don’t worry about it.’

“Other than the civil war that’s been going on, the main problem is tribal warfare. But at no time did I feel in harm’s way. All of the men carried AK-47s on their shoulders, mostly to ward off cattle thieves. If you didn’t have a gun, you were a pastor.”

Loveless commented about how receptive the pastors and others were to his teaching and how thrilled they were to understand the truth of God’s Word that they had never understood before. He told about showing the Jesus film, how the whole village turned out to see it, and the wonderful response of those who trusted Christ as Savior.

In Touch currently distributes approximately 10,000 Messengers a month. They are available for distribution through missionaries, church volunteer mission groups, and to those in the military and those in prison.

Carl F. H. Henry, who has been called the brains of the evangelical movement, said, “The Gospel is only good news if it gets there in time.”

Hudson Taylor, Christian missionary to China and founder of the China Inland Mission, declared, “The Great Commission is not an option to be considered; it is a command to be obeyed.”

Henry Martyn, missionary to India and Persia, exclaimed, “The spirit of Christ is the spirit of missions. The nearer we get to Him, the more intensely missionary we become.”

Stanley shares their heart and mission, stating, “The Gospel can penetrate any darkness, any theological or philosophical defenses, any hardened heart. People are saved because the Spirit testifies that what they’ve heard is the truth.”

In Touch Ministries, under the leadership of Dr. Charles Stanley, is intensely involved in missions in a myriad of ways and both extensive and effective in its endeavor to spread the good news of Jesus to every tongue, tribe, kindred, nation, and people group on this globe.