This story was posted near midnight on Sunday, Sept. 10 and is a developing story. It will be updated today with additional coverage from Athens, Cuthbert, Byron, Centerville, Cordele, Moultrie, Americus, and Greater Atlanta … where 150 Hispanics from Savannah began showing up in the middle of the night as sudden guests at Iglesia Bautista Hispanoamericana in Lilburn.

Hurricane Irma evacuees are finding shelter tonight in Georgia Baptist churches from Mount Vernon in the southeast to Cuthbert in the southwest … and everywhere in between.

Brewton Parker College is the first known shelter to open closest to coastal Georgia. The campus is located south of Interstate 16 – the main evacuee artery between Savannah and Macon – and within four hours of its noon opening today already had 45 of its 100 beds filled. 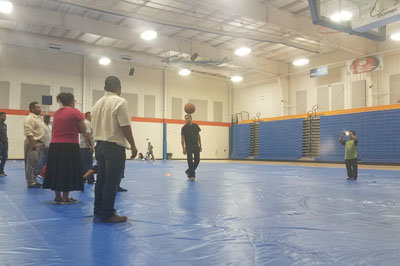 Evacuees enjoy some game time in Gill Gymnasium at Brewton-Parker College in Mount Vernon. The 100-capacity shelter opened at noon Sept. 10 and had 45 guests within 4 hours. JOSE GARCIA/BPC

The Georgia Baptist entity is seeing an increased number of individuals coming from the local community. Law enforcement agencies statewide are encouraging residents in less study dwellings such as manufactured housing to seek better protection from the strong winds and heavy rain.

Gill Gymnasium is the building being pressed into service for the next several days.

Just up the I-16 corridor in Dublin, churches in Laurens Baptist Association are working with local health agencies to support government shelters. The Association’s office is serving as the collection point for a variety of items needed by evacuees as they flee their homes with limited time to pack.

“We are serving as the storehouse and distribution center for all of the shelters,” he explained. “If the evacuees need it – toothbrush or toothpaste, food, water, pillows, or blankets – we sent runners to the location where it is needed.” 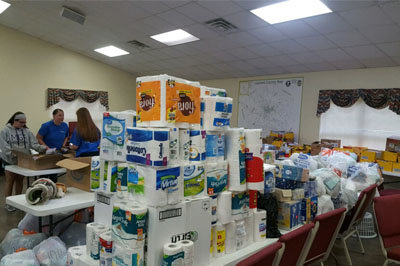 The churches and community have been extremely helpful in donating the needed items, he added.

Florida is experiencing the largest evacuation in the state’s history as the Category 5 storm nearly three times the width of the state churns its way up its West coast. State residents seeking to outrun its fury are finding their first shelter options in Valdosta, not far north of the state line into Georgia.

The shelters are in high demand because northbound interstate traffic is so congested, many are not traveling as far as they expected and are tiring from sitting behind other cars. The slower speeds also mean they are using gasoline at a higher burn rate and are having to stop to refuel.

Bundle that with discovering that hotels as far north as Atlanta have been sold out for days and a free cot in a church or high school gym sounds like a very good deal. Even if the family sleeps only a few hours before continuing their exodus, pastors explain.

Seeking a quick night's rest, then pressing further north the next day

Some are content to stay in the shelter until the storm passes, but a surprising number want to just stay overnight and leave the next morning to reach friends or relatives as far north as possible.

David Rogers, pastor of CrossPointe Church in Valdosta, is the first Baptist option inside the state. 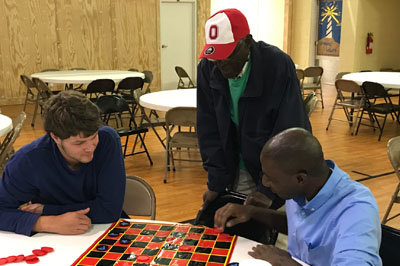 His church is among those serving as official Red Cross shelters with full service from the health department, an onsite nurse and clinic 24/7, security from the sheriff’s office, and representatives from the Division of Family and Children Services (DFACS).

“We were unable to have our regular services this morning because of all the activity but what is interesting is last week I began a series on being salt and light in the world. I never expected that we would be called on the very next week to live that out in such a powerful way,” Rogers said.

“There has been a lot of gospel sharing going on through a one-to-one basis, even with some of the local Red Cross workers. They have mentioned how nice our people have been and have expressed an interest in returning to visit our services after the storm has passed,” he noted.

The church has already housed nearly 500 in its new building, which was dedicated on Easter Sunday. It has a sleeping capacity of 750 through use of its sanctuary with moveable chairs, youth center, and other rooms.

CrossPointe’s sanctuary seats 1,400 and the church averages about 2,200 in two morning worship services.

But churches of all sizes are rolling out the red carpet to their guests, such as the creative folks just up the interstate at Lighthouse Baptist Church. The congregation – located just off I-75 at Sardis Road in Macon – doesn’t have a large sanctuary. But, it does have 16 acres for future growth.

Being accidental salt and light to passing motorists

And that is what they leveraged to be the salt and light to passing motorists seeking a safe place for themselves and their families and away from $200 nonexistent hotel rooms. 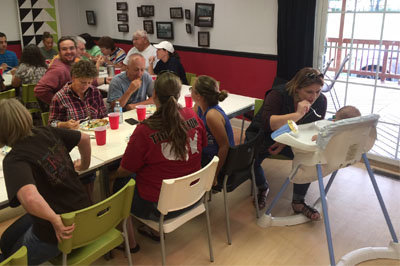 Guests at the RV campground hosted by Lighthouse Baptist Church in Macon relax in the church coffee shop. TIM SIZEMORE/Special

Pastor Tim Sizemore and laity put their heads together and decided they could run electricity and limited water to the site and covert it into a campground for the short duration. When word got out, families with RVs, campers, and just cars began pulling in to the pastoral setting for rest and temporary relaxation. Even a dump station, tied into the church’s septic tank, provided a measure of relief.

Church members are providing pot luck dinners, “just a traditional Southern Baptist covered dish meal, whatever they have at home or in their freezers. One member has a bakery and is providing items for the travelers; another friend of the church owns a coffee roastery named Morning by Morning Coffee and is providing plenty of caffeine for the guests.

“Dinner is everything from BBQ to cubed venison,” he added.

The church coffee shop has been turned into a meet-and-greet place for the evacuees, complete with a flat-screen television streaming live coverage of the storm back in their home state.

The site can accommodate up to 40 vehicles, including the occasional car.

Sizemore said news of the unique lodging came through word of mouth and Facebook, which registered 650 shares, and through the Rehoboth Baptist Association website and that of Robbins Air Force Base. He also occasionally drives over to the Love’s Truck Stop to invite strangers looking like they are tired  and need a place to spend the night.

Many of the Red Cross and church shelters are along the I-75 corridor which runs up the spine of the state from Valdosta to Atlanta. That is where most of the evacuees are found, if not on the I-16 corridor from Savannah to Macon.

And that is where Arabi Baptist Church, just west of I-75 between Valdosta and Tifton, has found its ministry niche. Pastor Johnny Evans told The Index that Houston Baptist Association cancelled tonight’s annual meeting due to the gathering storm. But that just gave the church more opportunity to serve strangers in the name of Christ. 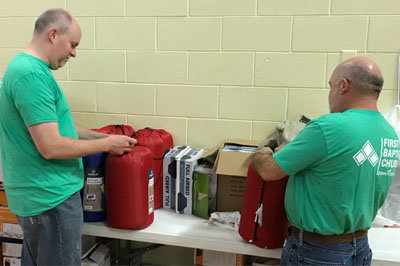 Word spread through the Crisp County sheriff’s department and other law enforcement as they saw needs and directed individuals and families to the safe, free lodging. It was well received, Evans says.

The church first served as a shelter in 2004 but was not pressed into service again until last year as Hurricane Matthew pushed coastal residents inland. Many of them ended up, temporarily, 120 miles west of their homes in Arabi.

The church can host 20 individuals in Sunday School classrooms – nothing fancy but high and dry and safe – and has had as many as 16. As of Sunday night they were down to nine but expected that to increase on Monday.

What is interesting, Evans says, is that last year the church provided solace to a woman fleeing Matthew’s storm surge in Savannah. And this year when the warning went out, the first place she thought of was Arabi Baptist Church.

“We’ve adopted her,” Evans said with a laugh.