Clyde Harkins – fought for our freedom 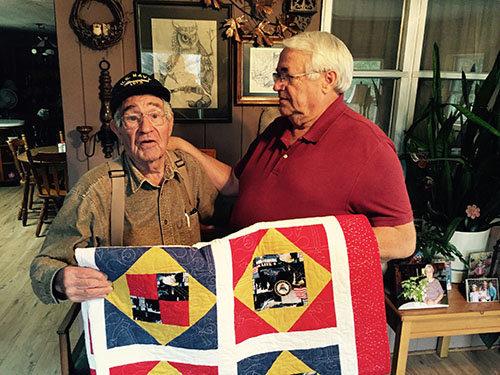 Clyde Harkins, left, and associational missionary Doug Merck hold the Quilt of Valor presented to Harkins at Zion Baptist Church, Suches in December. Harkins has been a deacon at Zion for years. GERALD HARRIS/Index

SUCHES – Many Americans today feel that there is an increasing hostility and intolerance toward Christian beliefs and values. It appears that in the current American culture, you are free to be a Christian as long as you don’t actually live out your faith, vote your faith, take a stand in relation to your own faith, or believe others should embrace your faith.

However, that is not what many of our military veterans fought and died for. Just ask Clyde Harkins of Suches. Harkins, his four brothers, and one sister all became a part of the United States military. Although the Harkins’ sister, Stella Mae, didn’t join the U.S. Air Force until after World War II her five brothers were all part of what is commonly believed to be the greatest war in history.

In terms of participation and commitment the five Harkins brothers rivaled the Sullivan brothers of Waterloo, IA.

One of the great tragedies of World War II was the death of the five Sullivan brothers who were on board the light cruiser USS Juneau (CL-52) when the ship was sunk by a Japanese submarine.

The Sullivans enlisted on Jan. 3, 1942 with the stipulation that they serve together.  They were all onboard the Juneau for a number of naval engagements during the month-long Battle of Guadalcanal. On November 13, 1942, during one of those battles, the Juneau was struck by a torpedo and had to withdraw.  Later that day, as it was leaving the Solomon Islands’ area, the Juneau was struck again, this time from a torpedo from Japanese submarine I-26.

The ship sank quickly and rescue efforts were not forthcoming due to fears about the Japanese naval presence. Eight days later ten survivors were retrieved from the water. The survivors reported that Frank, Joe, and Matt Sullivan died instantly. Their brother, Al, died the next day, and the younger brother, 19-year-old George, survived for four or five days.

Georgia’s version of the Sullivans, the Harkins brothers (I.T., Eldo, Ralph, Harley, and Clyde) have been heralded as American heroes through the years. Ten years ago The Gainesville Times published a story about the Harkins brothers and reported, “With her five sons in military service, Lola Harkins wavered between prayer and worry during WWII. The occasional car rolling into the Coopers Creek community near Suches would send her fears soaring.”

The praying paid off, because unlike the Sullivan brothers, the Harkins brothers all came back home alive after the war. Three of the brothers had seen fierce combat and one was seriously wounded, but they survived and counted it a privilege to fight for America’s freedom. 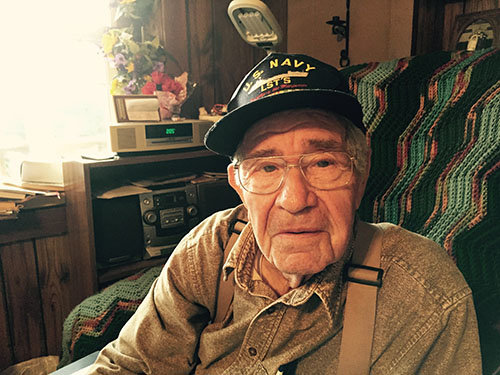 Clyde Harkins joined the military at 19 years old, though he'd attempted to do so two years earlier. GERALD HARRIS/Index

The Christian Index recently interviewed Clyde Harkins, now 90-years-old but the youngest of the five Harkins brothers. He recalled, “I.T. volunteered for service in the U.S. Army prior to the war and served in the military for 33 years. He saw action in the Philippines during WWII and also later in Viet Nam.

“Eldo was in the infantry in the war and was seriously wounded in the Philippines. A mortar shell exploded near him and a large piece of shrapnel took out about half of his knee. He nearly bled to death before he was rescued and evacuated for treatment.

“Ralph was a navy gunner on a U.S. merchant ship during the war.” According to the War Shipping Administration, the U.S. Merchant Ships suffered the highest rate of casualties of any service in WWII. Officially, a total of 1,554 ships were sunk due to war conditions, including 733 ships of over 1,000 gross tons. Torpedoes, shelling, bombs, kamikazes, and mines damaged hundreds of other ships.

Harley was also in the U.S. Navy and assigned to the USS Pennsylvania. The battleship was in dry-dock in Pearl Harbor when the Japanese attacked the navy yard on December 7, 1941 and was one of the first ships to open fire on the enemy. However, the Pennsylvania was severely strafed on that fateful day and had to return to San Francisco to be repaired. The Pennsylvania and her crew played a strategic part in WWII until she was torpedoed at Okinawa with Harley on board.

Clyde Harkins followed his four older brothers in military service by becoming a part of the U.S. Navy on April 26, 1944. He had attempted to volunteer when he was 17, but finally pressed the local draft board to take him at 19.

After Boot Camp at Camp Perry in Williamsburg, VA, Clyde went to Norfolk and then boarded a troopship for Naples, Italy. After brief stints in Casablanca, Tunisia, and Beserta (all in Africa) he boarded the 323-foot-long TLS (Tank Landing Ship) 284. This massive boat was used to haul tons of machines and people into war.

According to The North Georgia News, Clyde was first “a gunner and later a leading seaman in charge of rigging and other tackle on the football-sized ship.”

Fighting on both fronts

On D-Day, August 15, 1944, the LST 284 participated in the assault of the Green Beach, just east of St. Raphael, France, by putting ashore soldiers and guns while enemy fire punctured the afternoon sky.

The north Georgia native’s service was not limited to the combat in the Mediterranean area. Before the war ended Clyde was in the heat of the conflict in the South Pacific. His service duties took him to the Marshall Islands, Guam, Leyte, Philippines, Tokyo Bay, Yokohama, and Okinawa. 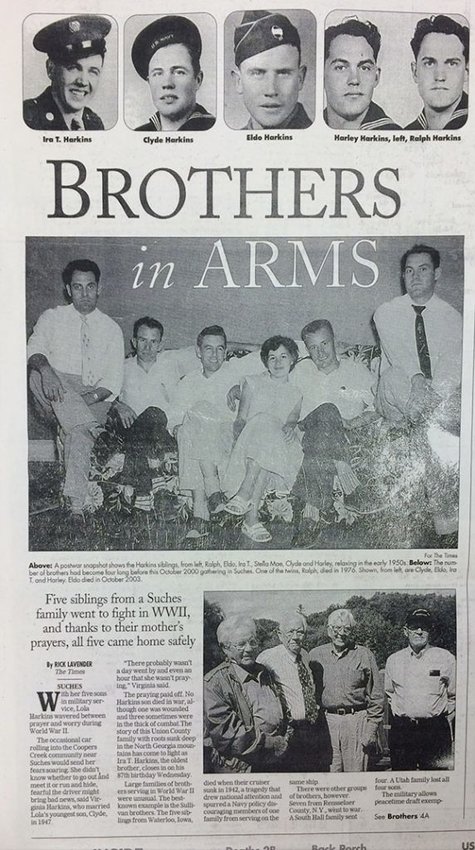 An issue of The Gainesville Times from March 12, 2006 recounted the story of the Harkins family and their military service. The photos shown were taken in the early 1950s.

The TLS containing Clyde and his crew were definitely in harm’s way in Okinawa. He stated, “Our craft was loaded with ammunition and we had to use smoke screens prevent the Japanese war planes from locating our position and bombing our ships.

“That is where General Simon Bolivar Buckner, Jr. was killed by enemy artillery fire.” Bolivar was the highest-ranking U.S. military officer to have been lost to enemy fire during World War II.

Clyde continued, “Our biggest problems were at night. We had one enemy plane that was hit and crashed into a seaplane tender (a vessel that not only carried seaplanes, but provided all the facilities needed for their operation).

“I can tell you this: during the war I never went to bed at night that I didn’t think it might well be my last night on this earth.”

The north Georgia sailor was in the South Pacific when the Japanese foreign minister Mamoru Shigemitsu and General Yoshijiro Umezu signed the instrument of surrender on the USS Missouri and U.S. General of the Army Douglas MacArthur received it and signed it on behalf of the Allied Powers.

Clyde Harkins finished his military service in Pearl Harbor; and he was discharged from the U. S. Navy on May 5, 1946 in Charleston, SC.

But why did he go to war? He explained, “Our family was very patriotic and we loved our country. Going off to war was something that seemed exciting to a 19-year-old boy. But we wanted to preserve our freedom and our Constitutional rights. I especially believe that our religious freedom should be preserved; and I hope what we fought for will last for years to come.”

A discussion with Clyde Harkins will convince you that the religious liberty for Christians is essential to the well-being of our nation. We must not squander through irresponsible citizenship or ill-conceived legislation what men and women like Clyde Harkins fought and died for.