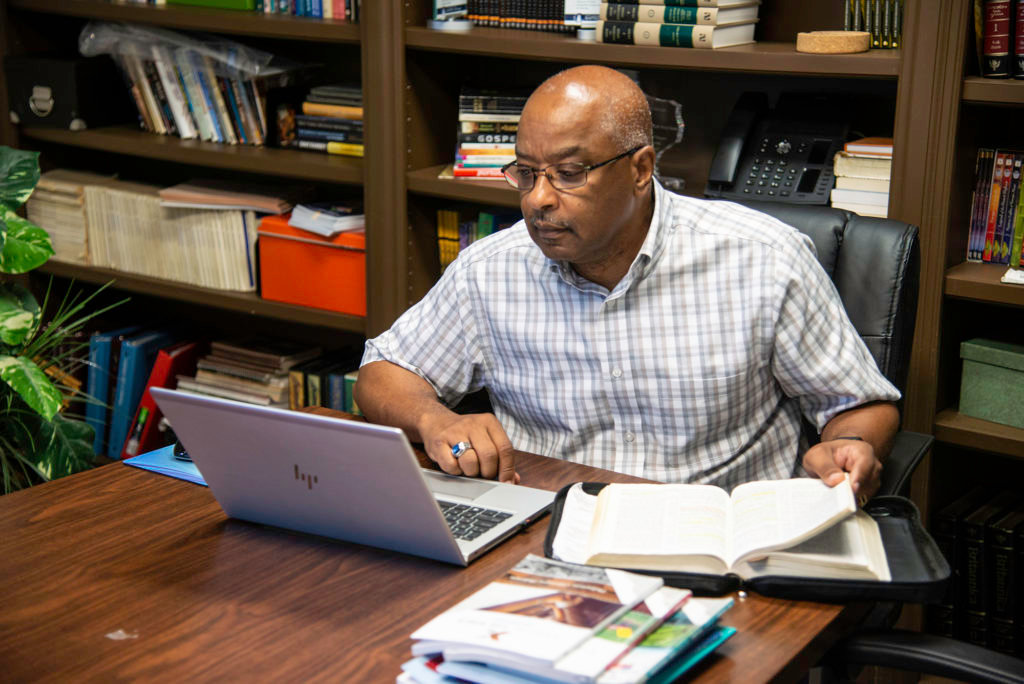 During the pandemic, Barry Calhoun used Microsoft Teams to connect with his father and extended family who live more than 600 miles away, leading them in Lifeway’s Explore the Bible study on the book of Luke. (Photo/David Clanton)

NASHVILLE (BP) – Barry Calhoun opened the Bible study book on his desk and thought about Jesus’ parable of a man who refused to stop knocking on his neighbor’s door for help. It reminded Calhoun to say one more time the prayer he had been bringing to God for almost 40 years: “Lord, please save my dad.”

Calhoun opened his eyes and logged on to Microsoft Teams where his extended family who live more than 600 miles away were waiting for him to lead them in an Explore the Bible study on the book of Luke. He scanned the room – Mom was there; so were several siblings. But where was Dad?

“He has to be here,” Calhoun said. “He’s the main reason we’re doing this.”

A long road of evangelism

Calhoun, a church mobilization strategist with the International Mission Board, became a Christian at age 9. But his father, Charles, had always kept his distance from Christianity.

“When we were growing up, he sent us to church with our mother and would give us a quarter to put in the offering, but that was it,” Calhoun said. “He would be gone on the weekends to go hunting and come back on Sunday nights.”

Calhoun described his father as a hard man who didn’t like to show his feelings. A steel worker by trade and a shade-tree mechanic, his father preferred to work out his own problems rather than acknowledge his heart needed repair. He had been inside a church twice, as far as Barry could recall – once for a funeral and once to attend his son’s first preaching assignment, which he walked out in the middle of.

Despite his father’s callousness toward Christ and the church, Calhoun never gave up hope that the Lord might save his father. He had preached the Gospel to him many times – once in the early 1980s when Calhoun first left his hometown to pursue a job with Texas Instruments. His father “prayed the sinner’s prayer,” but it proved to be mere words, Calhoun said, as “nothing really changed in his life.”

Throughout the years, Calhoun and others continued to encourage his father to repent and believe in Christ. Still, there appeared to be no fruit from these efforts. At a surprise party for his father’s 80th birthday, Calhoun told him, “There is still one thing missing in your life you need to get right before it’s too late.”

That was five years ago. A long five years, Calhoun said, because it seemed like nothing was happening.

Then a pandemic hit.

While many churches began experimenting with ways to take discipleship classes online, Calhoun had the idea to start an online Bible study with his family. His mother – a long-time Christian – wanted to study the book of Revelation, but Calhoun insisted they begin with Luke so his father could hear more clearly the message of the Gospel. His father was, after all, his motivation for leading the study.

Nothing short of a miracle

“Where’s Dad?” Calhoun asked his family members through his laptop screen. The senior Calhoun was downstairs but made his way back up at his family’s request to join their study on the book of Luke. It was the first of many Sundays he would make Bible study a regular part of his weekend – if nothing else, to appease his son.

Then, over the course of several months, Calhoun finally got a yes to the request he’d been asking of God for four decades. As Calhoun led his father through Luke’s account of God becoming a man, living a perfect life, dying a sacrificial death in the place of sinners, and rising again to eternal life, the senior Calhoun’s heart was softened. He repented of a lifetime of unbelief, turned to Christ for salvation, and declared Jesus the Lord of his life.

His son called it nothing short of a miracle.

“Salvation is a miracle, but I think the older you get the more of a miracle it becomes because typically the person has grown more calloused,” Calhoun said. “I’m pumped. I’m ecstatic. I don’t think I’ve ever prayed for something for so long. It wasn’t just a work God did in him, but a work He did in me too.”

Calhoun says that unlike a past profession of faith his father made, this one has been accompanied by observable fruit. Taking a short break in the study of Luke, Calhoun plans to lead his father through a four-week series he teaches as a pre-membership class at his own church, North Garland Baptist Fellowship in Garland, Texas, where he’s been a member for 31 years. The study will cover salvation, prayer, church discipline and stewardship.

Still, the study on Luke – part of the same curriculum Calhoun’s church uses on a weekly basis, will always be special to him.

“Walking through Lifeway’s Explore the Bible series crystalized it for my dad,” he said. “You can’t miss Christ in Luke. The writers did an excellent job in putting the series together and walking us through it. I just want to take my hat off to them and say thank you.”

When asked to summarize what this past year has meant to him, Calhoun said it’s about staying the course and not giving up, believing that God is faithful.

“At the end of the book of Job, he says, ‘I had heard reports about you, but now my eyes have seen you,’” Calhoun said, citing Job 42:5. “I haven’t seen God, but His work in my father’s life has given me a new take on what it means to persevere. Sometimes you want to give up knocking on the door, but you can’t.

“I always teach that it’s never too late. If there’s still breath in someone, there’s still time for them to get things right with God. When we get to the other side in heaven, I’ll get to see just what God was doing in my father to bring him to this point.”