ATLANTA — Much has been made of the energy brought by younger voters, almost as much as the wide brush painting them all supporting liberal social issues. While those issues are definitely on their radar, college students attending the Franklin Graham Decision America gathering in Atlanta Feb. 10 see them through a different lense than many of their peers.

"Attending Decision America helped me to recognize my political role as a Christian," said Meagan Sibley, a member of the BCM at Georgia State University. "The message helped me to realize I am not called to be passive about the state of my country, but rather to be in constant prayer and an active participant in politics."

"It was touching to see so many people gathered together from a variety of churches, areas of the city, all ages, for one purpose – to pray for our country," reflected campus minister Teresa Royall. "Rev. Graham called us out to be responsible citizens and vote, make sure we're aware of what each candidate stands for, and as best as possible vote for the candidates that stand for biblical values." 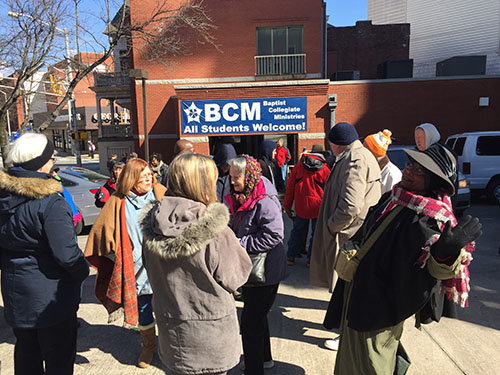 Members of Horizon Baptist, Suwanee, and First Baptist, Lilburn, prepare to walk the three blocks from the BCM student center to the state capitol. BOB ROYALL/Special

Graham's Decision America Tour will go through all 50 states holding prayer rallies and preaching the Gospel in addition to challenging Christians to be involved in the political process while living out their witness day-to-day.

Although politics was the subject of the meeting, Jessica Ingall felt it was just part of a much larger scope.

"There is power in the body of Christ gathering together to lift up His name in our city," she said. "I thought of 2 Chronicles 7:14, 'If my people who are called by My name humble themselves and pray and seek My face and turn from their wicked ways, then I will hear from heaven, will forgive their sin, and heal their land.'

"My heart was encouraged as I stood with thousands who came with the prayerful desire for God to be the leader of our nation. ... I will remember today as a day of hope."

Royall doesn't consider herself a "political person," but "I try to keep up with the candidates, what they stand for, and where they are on the issues. I want to vote for someone who is in line with my values." 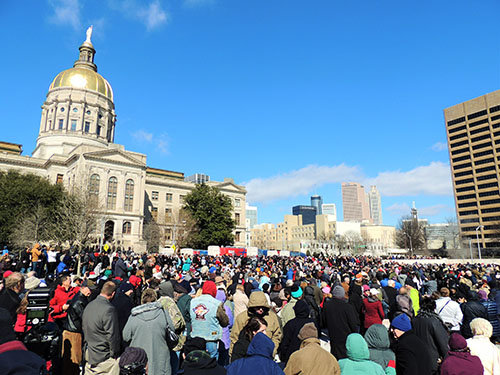 The crowd braved the cold on a crisp, clear day. ANNA SUNGHEE CHIN/Special

Freshman Anna Chin wasn't sure what to expect, but was pleasantly surprised. "My favorite part was when everyone was praying for our country. You could just feel the spirit of God in that place and the power of our prayers spreading across the nation. It was an amazing experience."

"The students were listening to every word," Royall pointed out. "You could tell they were really absorbing [Graham's] message. Some said they recognized they needed to be involved in political life. One told me it made her want to run for Congress one day.

"Whether God is calling students to run for office or not, we need Christians to be serving in political positions."

At the GSU BCM center students welcomed groups from First Baptist Church in Lilburn and Horizon Baptist, Suwanee – where Royall attends – to give participants a cross-generational experience. They also prayed together before walking the three blocks to Liberty Plaza. Other schools represented included Brewton-Parker College and Mercer University-Atlanta, where Ingall, a member of First Baptist Woodstock, is a member.

That generational connection goes further for Ingall, whose grandfather became a Christian under the father of the man preaching the same Gospel Wednesday.

"God has the power and will to work in and through a people surrendered to Him," she professed. "The changes I dream of seeing will not happen overnight, but I can begin to prayerfully ask God what He would have me to do in my own life and circles of influence to support leaders who believe and walk out biblical truths." 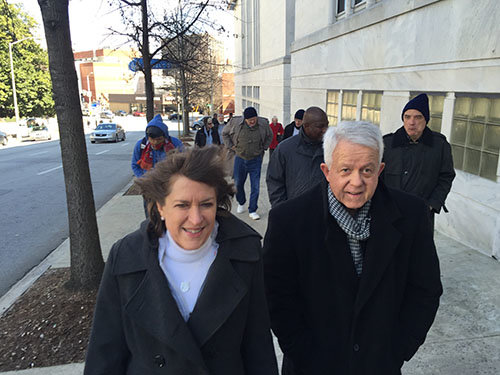 Georgia State BCM campus minister Teresa Royall walks with her pastor, Sid Hopkins of Horizon Baptist Church in Suwanee. Members from Horizon and First Baptist Lilburn met with students at the BCM center and walked to the gathering. BOB ROYALL/Special 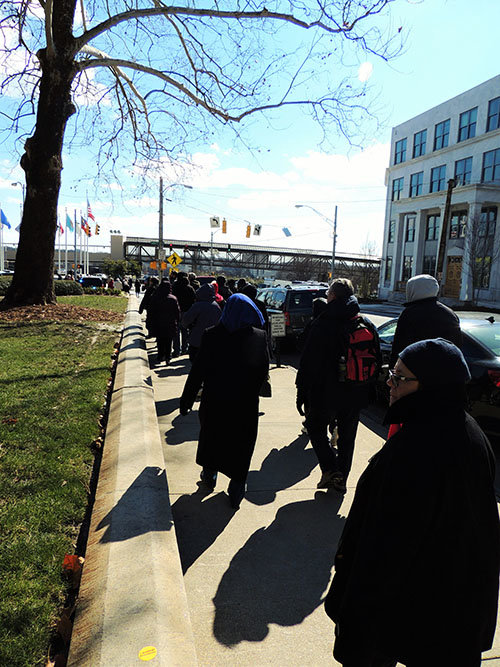 Participants in the rally walk from the BCM center to the capitol. ANNA SUNGHEE CHIN/Special 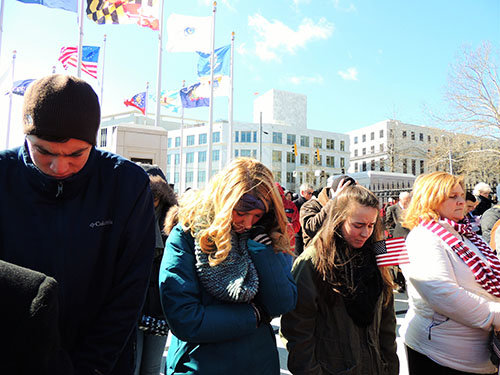