Column: Don't come back until baseball has been made better 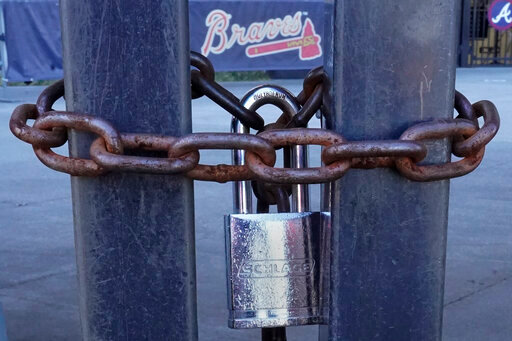 Locked gates are shown at Truist Park, home of the Atlanta Braves baseball team, Wednesday, March 2, 2022, in Atlanta. With owners and players unable to agree on a labor contract to replace the collective bargaining agreement that expired Dec. 1, baseball commissioner Rob Manfred followed through with his threat on Tuesday and canceled the first two series for each of the 30 major league teams. (AP Photo/John Bazemore)
Posted Thursday, March 3, 2022 8:36 am
By TIM DAHLBERG, Associated Press

The talks are over, at least for now. Opening day is gone, too, and now we’re forced to wait to see if we get any baseball at all.

If there was any good news coming out of baseball’s labor talks in Florida it was this: At least now we know who to blame.

Here’s a hint: It’s not anyone wearing a uniform.

No, baseball players aren’t harmless in any of this, far from it. They keep wanting more when they historically have always had the best deals in all of professional sports.

But this one is mostly on the 30 miserable, conniving owners who have always cared more about squeezing every last dollar out of the game than they ever cared about the game itself.

Once again, they’ve stolen from baseball fans. This time they made off with opening day and at least six games out of the regular season.

Sadly, that may just be the beginning. The temperatures could easily hit 100 degrees in Arizona by the time spring training begins, if it ever does.

For what purpose, it’s hard to figure out. Yes, the players' union can be demanding and is prone to asking for far more than owners are willing to deliver.

But the issues weren’t so complex they couldn’t be solved with some more time at the table. And the truth is, there was nothing on that table that would tilt the playing field so badly that franchises around the country would start bleeding money.

It’s almost like the owners didn’t want the season to start on time — and maybe they really didn’t. Outside of opening day, early season games are not generally money makers for owners despite commissioner Rob Manfred’s contention that missing the games would be a tragedy for baseball.

For weeks, owners refused to negotiate at all. When they finally did, it was with warnings of missed games and salaries and, finally, an ultimatum that opening day would be scratched if players didn’t agree to a last and best offer.

Afterward, they cried poor, as if anyone believed them.

“The last five years have been very difficult years from a revenue perspective for the industry given the pandemic,” Manfred said.

They’ve been difficult for baseball fans, too, though that’s another story. The fact that fans are fleeing the game isn’t all economic, but they’ve certainly grown weary of paying $75 for a mediocre seat, $25 for parking and $18 plus tip every time the beer guy comes down the aisle.

No one should feel sorry for baseball players, either, who make an average of $4 million a year to play a child’s game. Indeed, the argument advanced by the union that they are bargaining for a system where all teams are competitive is simply a smokescreen for higher payrolls on smaller market clubs.

But salaries that once seemed to have no ceiling in the past have slipped a bit in the last few years — a trend players want reversed. That’s largely because front offices now use analytics to figure out value and teams know that — except for a few superstars — players are pretty much exchangeable.

No reason to pay a veteran reliever $15 million a year when teams can bring in young fireballers at a fraction of the price to replace them without skipping a beat.

“The game has suffered damage for a while now. ... The game has been manipulated,” union chief Tony Clark said. “The value inherent and how players are respected and viewed has changed. Players have been commoditized, monetized in a way that is really hard to explain.”

What neither side seems to realize is that fans don’t really care. Not about revenue sharing, not about how many players get to go to arbitration and not about whether each club has a personal chef in the clubhouse.

They just want to go to the ballpark, drink their $18 beer and see some baseball.

Unfortunately, there’s nothing in the negotiations that will make that baseball any better. While the players and owners argue about economics, the game is dying a slow death because it is simply becoming unwatchable.

So here’s a thought. Return to the bargaining table and figure out what to do about arbitration years and luxury taxes. Go ahead and expand the playoffs, put ads on uniforms and adopt the DH in the National League because those are done deals already anyway.

Then stay at the table. Figure out what to do about the shift. Put a limit on the number of pitchers in any game. Come up with a way to speed up the game and reintroduce the strategies — the bunt, hit-and-run and sacrifice — that once made it so interesting.

Do something for the fans for once instead of chasing the last dollar they have in their pockets.

Or, in the alternative, just don’t play at all.

Tim Dahlberg is a national sports columnist for The Associated Press. Write to him at tdahlberg@ap.org or http://twitter.com/timdahlberg