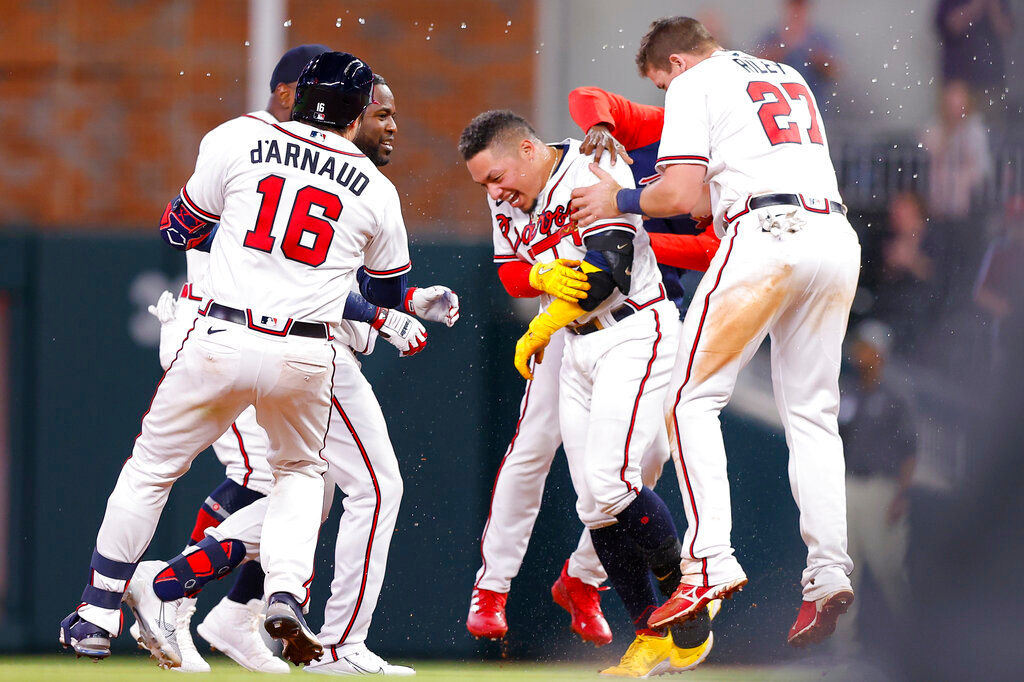 Atlanta Braves' William Contreras is mobbed by teammates after his game-winning single in the ninth inning of against the Philadelphia Phillies, Tuesday, May 24, 2022, in Atlanta. (AP Photo/Todd Kirkland)
Posted Wednesday, May 25, 2022 8:56 am
By GEORGE HENRY, Associated Press

ATLANTA (AP) — William Contreras picked the perfect moment for the first walk-off hit of his career.

His parents, William Contreras and Olga Castillo, were in the stands for the first time watching him play a major league game, and the 24-year-old wanted to send them back to Venezuela happy. He was 0 for 4 with three strikeouts before his big swing Tuesday night.

Contreras singled home Ronald Acuña Jr. in the bottom of the ninth inning to give the Atlanta Braves a 6-5 victory over the Philadelphia Phillies.

“Super happy, emotional — there aren't words for it," Contreras said through a translator. “Myself and my brother (Cubs catcher Willson Contreras) are both here because of the sacrifice they made for us. All their constant support, putting us through everything. So, beyond emotions. Super grateful."

Bryce Harper put Philadelphia ahead 5-4 in the top of the ninth with a two-run homer off closer Kenley Jansen (3-0). Harper finished with four RBIs.

But the Braves rallied back, taking advantage of a costly error by center fielder Roman Quinn.

Dansby Swanson doubled off Nick Nelson (1-1) to begin the ninth and advanced on a wild pitch. Swanson came home when Acuña’s sacrifice fly bounced off Quinn's glove, allowing Acuña to reach second base before scoring on Contreras' hit.

The Phillies were trying to win a third straight game and seventh in their last nine on the road. The Braves have scuffled a season after winning the World Series but stopped their two-game skid.

Harper entered with one hit in his last 27 at-bats at Truist Park. The two-time NL MVP is working exclusively at designated hitter while he recovers from a right elbow injury that has prevented him from playing right field. His 10th homer traveled 438 feet and hit off the Chop House facade in right field.

Matt Olson’s homer for Atlanta, his fifth of the season, hit the foul pole in right for a 3-2 lead in the sixth. Ozzie Albies and Austin Riley followed with singles and Adam Duvall walked to load the bases and chase reliever James Norwood before Acuña hit a sacrifice fly against Andrew Bellatti to make it 4-2.

Braves starter Max Fried allowed five hits and two runs with two walks and five strikeouts in six innings. He ended his night by striking out J.T. Realmuto with the bases loaded.

“Just trying to battle as best I could and get out of that jam in the sixth," Fried said. “(Manager Brian Snitker) came out and kind of asked how I was doing and I said that it's probably the best stuff I've had all night. He said, ‘Go get ’em.'”

Harper’s RBI single in the seventh trimmed it to 4-3. Harper had been 0 for 12 in his career against reliever Will Smith.

Philadelphia tied it at 2 in the sixth when Alec Bohm doubled, advanced on a passed ball and scored on Harper’s double.

The Braves took a 2-1 lead in the second on RBI singles by Swanson and Acuña against Phillies starter Kyle Gibson, who was charged with seven hits and two runs in five innings.

Philadelphia went up 1-0 in the second when Jean Segura reached on an infield single, advanced to third on Kyle Schwarber’s single and scored on Realmuto’s sacrifice fly.

Acuña, whose 29-game on-base streak ended Monday, went 2 for 3 but struck out looking with runners on first and second to end the fourth.

The Braves are 27-15 against Philadelphia at Truist Park since the venue opened in 2017.

For Contreras, it's been a busy week. He debuted in left field Monday and will catch on Wednesday. He served as the designated hitter Tuesday, and Snitker has moved him into the No. 2 hole in the lineup behind Acuña.

It's quite a turnaround considering Contreras might still be in Triple-A if former No. 2 catcher Manny Piña hadn't sustained a season-ending injury.

“I've just tried to stay mentally strong and focused for whatever comes my way," Contreras said. “Obviously if they give me the opportunity I want to take advantage of it. I want to make the most of it. I’m happy with where I am at, I’m happy with the job I’ve done so far and I’m looking forward to it."