Greg Bentley, right, prays with a veteran at the Phoenix Vet Center on Saturday (June 10) as part of the Crossover Phoenix event. JOE WESTBURY/Index
Posted Monday, June 12, 2017 6:50 am
Joe Westbury

Greg Bentley, wearing green, prays with a veteran at the Phoenix Vet Center on Saturday, June 10, as part of the Crossover Phoenix event. JOE WESTBURY/Index
PHOENIX, AZ — As tens of thousands of local believers brought friends to the Greg Laurie Harvest America rally on Sunday afternoon, June 11, Georgia Baptists in town for the Southern Baptist Convention’s annual meeting were praying for a harvest that would change lives for eternity. Nearly 40,000 people attended what Laurie called the “Super Bowl of Evangelism” at the University of Phoenix Stadium in Glendale, a Phoenix suburb, which was also streamed online. It was this year’s focal point of Crossover Phoenix, a traditionally week-long evangelistic and ministry-focused week which was condensed this year into just two days. But those praying for a harvest were also praying for an important area frequently overlooked: discipleship. Two Georgia Baptists in town spoke about the need for both spiritual renewal in the church and a spiritual awakening among the unchurched. As they talked about the rally, they reflected on the disturbing numbers released just days before by LifeWay Christian Resources which painted a bleak scenario for the denomination’s future. 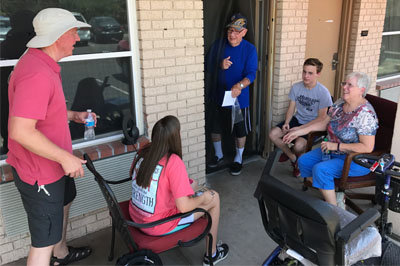 A family on a summer missions trip visit with a veteran during Crossover Phoenix the day before the Greg Laurie Harvest America event. The group, from First Baptist Church of Lyons, has begun a tradition of making missions a part of their summer vacation experiences. JOE WESTBURY/Index

This year’s Annual Church Profile was once again somber with the only indicator of health being the number of churches started in 2016. But all the other major areas showed a continuation of the decline that began with a steady drop in baptisms a decade ago. The most sobering news was that baptisms had dropped to the lowest level since 1946 and continue to break through the previous year’s historic low. With another drop in membership, the denomination is actually shrinking as the nation’s population continues to swell. The gap between the two is growing at an historic level. “From what I have observed in the churches in the Association where I serve, the LifeWay figures are pretty accurate. I wish they weren’t, I wish they could be attributed to poor reporting by churches, but I doubt that is the case,” observed Associational Missionary Bobby Braswell, Jr.

15 million members, but only 5 million show up three times a month

“The SBC claims it has a little more than 15 million members, about 15.2 million I believe. But Thursday’s LifeWay report said that only 5.2 million attend any weekly worship service … and that is down 6.7 percent, or nearly 400,000 fewer than the previous year," Braswell noted. 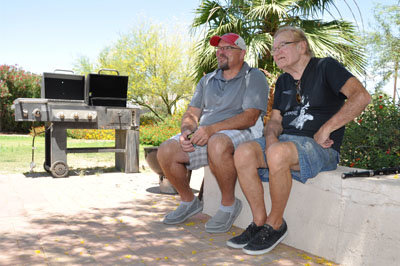 Bobby Braswell Jr., left, enjoys a light-hearted moment with a Phoenix veteran during the annual Crossover event on Saturday (June 10). Braswell is associational missionary for Middle Baptist Association in Sylvania. JOE WESTBURY/Index
“That means that a good two-thirds of us do not meet the lowest level of participation in the life of the local church,” he added. Braswell serves with Middle Baptist Association in Sylvania. Braswell said the real concern is what those numbers say about the state of discipleship today. “Going to any kind of worship just three times a month, the criteria for being a regular participant, is not a very generous commitment. It’s a pretty low bar for anyone to meet.” Southern Baptists have historically done a good job of evangelizing and baptizing the unchurched through the years. But the lack of discipleship is very apparent in the lives of those being reached. Johnny Hunt, pastor of First Baptist Church of Woodstock, addressed that concern at a church renewal conference at the Georgia Baptist Mission Board on May 18. He mentioned the importance of small groups and getting new believers immediately involved in the church. “We know that we will lose you, as a new member, if you do not get involved within your first year. You will be gone in a matter of months. But if you connect with a Sunday School class or small group you will remain for at least three to five years,” he said. Discipleship is key to church growth and keeping members which churches have worked so hard to reach, Braswell noted.

Bright spots in the dismal numbers

But, he added, he does see some bright spots. 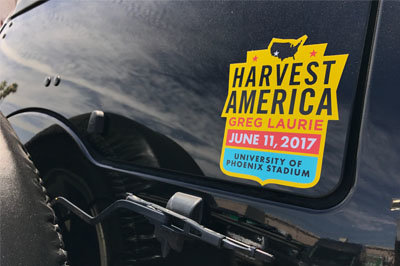 Car throughout Phoenix were mobile billboards for the Greg Laurie Harvest Phoenix rally leading up to the Sunday (June 11) event. Nearly 40,000 people attended the rally at Glendale's University of Phoenix stadium. JOE WESTBURY/Index
“I do see some encouragement among the small, rural churches in south Georgia who are making good strides to reach across the racial divide. Those steps show a heart that is right with God, and that is important,” he stated.

Both men had spent the previous day serving through Crossover Phoenix, concentrating their ministry at the city’s Vet Center and its outreach to veterans. Bentley said he feels churches have become “too inner-focused to make much of a difference in changing society. They are living in the heyday of their past success; glorifying the past prevents them from having a future.” Always looking back rather than looking forward does not allow any church to be open to new ideas and approaches to ministry, he maintains. “I tell people that we need to reach others and they agree with that. But they are resistant to anything new. Being traditional and staying close to biblical principles is good but you can let that tradition  handcuff your effectiveness."

Change the method without compromising the message

“You need to realize that you can change the method [of sharing Christ] without compromising the message.” Braswell and Bentley are trusting that new believers who came to Christ through the Laurie rally will be grafted into Arizona Baptist congregations with a strong commitment to discipleship. Without that, they agree, not much will change for the future health of the denomination. The proof will lay in next year’s release of the Annual Church Profile the week leading up to the SBC annual meeting in Dallas.